A staircase is perhaps the most common piece of architectural miracles, which we are very used to using and we often forget how great they are. There are ancient and have been serving mankind from about 6000 BC and helping us overcome height, small or big. They say life isn't about the destination, but the journey and that seems to be in fact true if we read about some of the amazing staircases around the world.

Rome boasts of many artistic highlights, but few are as overpowering as the amazing staircase built by Italian architect and engineer Giuseppe Momo in 1932. A must visit to any trip in Rome is the Vatican spiral staircase which is now the most photographed masterpiece with nine miles of art in the Vatican museum, Italy. The ‘Spiral Staircase’, also called the ‘Momo Staircase’ or the ‘Snail Staircase’ is made up of two wrought iron stairways – one going up and one going down, that curve in a double helix. Ironically it was created in a time before the double helix (a 3D twist) became a symbol for science, DNA and subsequently, all human life. 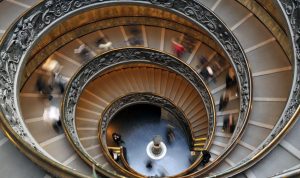 This double helix stairway allows people to ascend without meeting people descending; with the main purpose being to allow uninterrupted traffic in each direction. It encircles the outer wall of a stairwell of approximately fifteen meters wide and with a clear space at the centre. The balustrade around the ramp is of ornately worked metal. A canopy located above provides the necessary light to illuminate the stairs. The staircase is located at the end of the museum visit and all visitors leave by this route. While the staircase was once walked by every visitor to the Vatican Museums on their way in, it is no longer on the route now. Subsequently, the Vatican spiral staircase is now missed by a lot of visitors to the Vatican museums.

Another amazing staircase is the steel sculpture, a wonderful piece of art designed by Olafur Eliasson. This beautiful merging of art and architecture is a 9 meter-high walk-double spiral of steel in the entrance of the KPMG office building in Munich, Germany. This never-ending spiral stair is known as ‘Umschreibung’ and was built in 2004. The swirled shape connects to itself, creating a continuous structure that looks more like an optical illusion. Hard to contemplate for a long time without getting a bit dizzy, the staircase seems to be going upwards and downwards at the same time making it convenient for co-workers to go for a stroll or get a quick workout in on their lunch breaks without having to stray too far away.

‘Awaji Yumebutai’ is a complex array of buildings and other areas located on Awaji Island in Hyogo Prefecture, Japan. ‘Awaji Yumebutai’ or ‘Awaji Hyakudanen’ meaning ‘stage of gardens’ was built as a memorial of the great Hanshin earthquake of 1995 on the side of a mountain that had been half taken away in the early 1990’s for use as sea-fill during construction to build artificial islands in Osaka Bay. One of the gardens of Awaji Yumebutai is the 100-level garden which consists of 100 squares of terraced smaller gardens. There are exactly 100 square gardens that are decorated with flowers throughout each of the 4 seasons serving as "a symbol to calm the souls of those who lost their lives in the disaster". 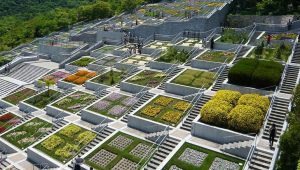 The complex was designed by architect Tadao Ando and built on the side of a mountain from which soil had been taken away in the early 1990s to cater to huge landfill development in the Osaka Bay area, including the building of the Kansai International Airport. The entire complex now includes a hotel, a conference center, a small amphitheater and restaurants and plazas. Flights of stairs run all through the grid so that it’s possible to visit each of the one hundred flower beds. The garden lies at the highest point of the Yumebutai complex and is linked to the other parts of the project by a 10 meters wide step-cascade of continuously flowing water, flanked by stairs that follow the same arrangement and incline. A free-standing elevator takes visitors to the top of the first large square of flower beds where there is a spectacular viewing platform from where one can have a 360-degree view of the entire Yumebutai complex.

Indian architecture too progressed with time and yet is no less wierder than any other architecture in the world. Let us take the Chand Baori of Rajasthan for instance. Step-wells or 'bawdi'/'baori' are unique to this nation. Chand Baori is a stepwell situated in the village of Abhaneri near Jaipur in Rajasthan. Abhaneri is a village in the Dausa district of Rajasthan which is situated at a distance of 95 km from Jaipur, on the Jaipur-Agra road. Abhaneri was originally named Abha Nagri, which means 'city of brightness', but due to mispronunciation of the same, the name got changed to 'Abhaneri'. The city is now in ruins, but it attracts tourists from across the globe. It is located opposite the Harshat Mata temple and consists of 3,500 narrow steps over 13 storeys. It extends approximately 30mts (100 ft) into the ground making it one of the deepest and largest stepwells in India. It was built by King Chand Raja of the Gurjara Pratihara clan of the Chauhan Dynasty during the 9th cenrury and was dedicated to Harshat Mata, the goddess of joy and happiness.

Centuries ago, step-wells were built to provide water all year through.The state of Rajasthan is extremely arid and the design and final structure of Chand Baori was intended to conserve as much water as possible. At the bottom of the well, the air remains 5-6 degrees cooler than at the surface and Chand Baori was used as a community gathering place for locals during immense heat. One side of the well even has a pavilion and resting room for the royals.

It has an enclosed rectangular courtyard kind of structure. Descending the stairs on the left, one can see the cavernous 'baori' narrowing towards the bottom, criss-crossed with double flights of steps on three sides to reach the water surface down below. The stairs encircle the water on the three sides while the fourth side boasts of a pavillion with three storeys with beautiful carved 'jharokhas' or windows and rest rooms supported on pillars and two projecting balconies enshrining beautiful sculptures.

The steps of Chand Baori form a magical maze and the consequent play of light and shadow on the structure gives it a captivating look. Its exquisite geometry attracts local and foreign tourists alike. The incredibly beautiful Chand Baori is not an easy landmark to find, thus considered as one of the hidden secrets of India. This amazing structure has also been used as a filming location for a number of films like Paheli, Bhool Bhoolaiya, The Dark Knight Rises, The Fall, etc.

Staircases today pose as a contender to the stylish elevators and escalators and are an equally mesmerizing part of a concrete structure. Sure enough our knees would probably want to stop bending and our feet would feel like they're going to fall off by the time we finish walking up most of these massive stair-filled walkways but the physical pain is worth the elevating experience we may never encounter again.