An Ambassador of NE to the World

In the past couple of years, the cinema industry of Assam seems to be buzzing with a lot of activity with the hosting of a number of premier film festivals by the government and also the coming up of a new generation of young and dynamic filmmakers. But as the saying goes, All the glitters is not gold, and in this issue of mélange, we would like to introduce our readers with a filmmaker, script writer and documentary maker who has been relentlessly working to showcase Assam to the world at large, but who, unfortunately, has not received the due recognition in his own home State. 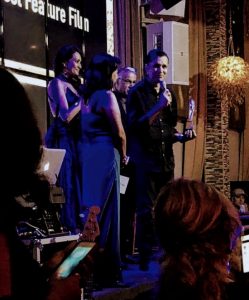 We are talking about Bidyut Kotoky, a well-known filmmaker who has made a mark in the international circuit with more than 100 short films on Northeast India. His first film on the Assamese mobile theatre industry ‘Bhraimoman Theatre - Where Othello sails with Titanic’ (2006), won a special mention in the National Awards. In the year 2010, Bidyut’s documentary ‘The Mighty Ahoms’ was telecast on National Geographic and Fox History channels.

As a writer-director, his first film, ‘Ekhon Nedekha Nadir xipare’/‘As The River Flows’ won him the Best Script and the Best Actor Award for Sanjay Suri in the 2013 Washington DC South-Asian Film Festival. He also won ‘The Best Script Award’ for the period 2010-2012 in the Assam State Film Award for the same film. Recently, the film won the Audience Choice Award in 2014 North 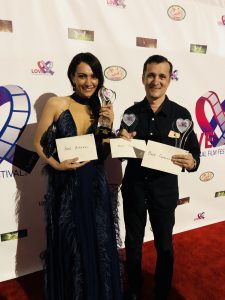 His documentary ‘Guns and Guitar- a musical travelogue’ was selected as one of the top 100 documentaries of this year by Color Tape International Film Festival – considered the largest festival of the Southern Hemisphere. Additionally the film has been part of the official selection of 17 festivals so far besides being an Official Selection of the Indian Panorama in the International Film Festival of India (Goa) 2016.

Bidyut is presently busy with the re-launch of his feature-length film, ‘Rainbow fields’, which deals with the effect of violence on kids growing up in conflict zone. An Official Selection of the

Indian Panorama in the International Film Festival of India (Goa) 2017, it become the first Assamese feature to get a commercial release in the US in July 2018. Till date, the film has traveled to 25

Following are excerpts from a recent interview.

Ans: Being in films is the only thing I dreamt of from my childhood (if I take out the utopian adolescence aspiration of playing cricket for the country!). Well, to be honest my first love was acting, but thankfully I realized it early enough that it was not my cup of tea. After completing my Masters in Economics and Post-graduate Diploma in Mass Communication from Pune, I shifted to Mumbai and started my journey as an assistant director on a TV serial. However, along the way within a short time, some lucky breaks happened and I started making independent short films for a cultural serial on DD called ‘Surabhi’- which was hugely popular amongst the viewers in the late 1990s.

Ans: “So Bidyut, tell me about the theatre scene of Assam” – Carl Miller, from UK’s famous Royal Court Theatre had asked me on a summer evening of 2003. After a brief pause, I told him that we don’t have much of a theatre movement in Assam of late, but we do have something called the mobile theatre. As I started narrating the concept of the mobile theatre, I could sense the growing interest amongst the listeners and Carl’s eyes were lighting up! He started making plans for visiting Assam to experience mobile theatre first hand… and that was the first time I tried looking at the phenomenon of our ‘Bhraimoman Theatre’ from an outsider’s prospective. And perhaps it was then the realization hit me – it is indeed a unique phenomenon whose significance I was happily overlooking. A classic case of nearest from church, farthest from God!

Actually I had been shooting a bit and pieces of mobile theatre performances on my visits to Assam from 1998 onwards. The idea was just to make a short film of around 5-minute duration for the cultural magazine ‘Surabhi’ that used to be telecast in DD and for which I used to work as one of the independent directors. The interaction with Carl convinced me that a subject like mobile theatre deserved a much bigger platform… And what a journey it turned out to be! During the next two years in particular and a total of 8 years in general, we re-lived the 40-odd years history of Assam’s ‘Bhraimoman Theatre…’.

Ans: Whenever we talk of terrorism, we know the point of view of the terrorists. After all, they survive on propaganda. The people opposing them also have no option but to counter those propagandas, so we know about their point of view as well. But what gets lost in this crossfire of propagandas is the point of view of the common man – in spite of being the vast majority, who have long lost their voices. This, unfortunately, is true in any place that is facing the problem of terrorism – whether it is Afghanistan, Iraq, Pakistan, Kashmir or Assam. This belief was the starting point of ‘Ekhon Nedekha Nadir Xipare’. Yes, in this film I’m talking about Assam as I know her better than any other place. But the story of ‘Ekhon Nedekha Nadir Xipare’ could very well have been a story in any part of this world which is facing the challenges of terrorism.

Ans: The idea of ‘Guns and Guitars’ came to me on a casual monsoon morning in Mumbai, while I was accompanying Lou Majaw, the legendary rock artist of Northeast India, to a shop selling musical instruments. Lou told me that that on May 24, 2011, he was planning to celebrate Bob Dylan’s birthday in a different manner. He is planning a massive concert in a large vacant plot, near the Umiam Lake in Shillong, Meghalaya. Instantly, I knew that this is a film I have to make!

More often than not, the Northeast finds a mention in the national media for all the wrong reasons – when there is bomb blast, ambush, economic blockade, drug haul, so on and so forth. With no mention or focus on the positive energies in the region, the default focus has been on the negative energies…. For years, I have been troubled by this and have tried to bring out various, lesser known aspects of the region through my films. The above mentioned discussion with Lou, the upcoming concert and the unusual proliferation of music and bands in the region triggered a thought process in me and ‘Guns and Guitars’ was born.

Ans: ‘Xhoixobote Dhemalite’ (Rainbow Fields) is my ode to my childhood. I grew up in the burning Assam of 1980s and as a child had to witness many things which ideally a child shouldn’t… ‘If we say we don’t own this world but borrowed it from our children, then what kind of world are we leaving behind for them?’ -time and again, I used to be troubled by this question. And when Mou came to our life and made me a father, I realized that if I need to look at her eyes un-flinched, I need to address this question. And Xhoixobote Dhemalite (Rainbow Fields) was born. This is not to say that I believe making a film will change the world, but again giving up is not an option…

The film has done very well everywhere it played outside Assam. It ran in packed houses in Mumbai, Bangalore &Navi Mumbai. In Kolkata’s Nandan it had played for two weeks. In fact I once got a call from Nandan, where the projectionist told me that after the day’s screening there was spontaneous clapping and standing ovation by the audience. In a special screening it happens at times, but to get it in a regular commercial screening – I felt it to be something special… The film also happens to be the first Assamese Film to release theatrically in the US, getting very good response. Unfortunately, the only place the film didn’t manage to get a proper run was in Assam, due to circumstances beyond our control… For me, it is like a mission unaccomplished… That is the reason behind this second coming.

Ans: When I was planning for my feature film ‘Xhoixobote Dhemalite’ (Rainbow fields), there was no sequence with rain that was inbuilt in the script. But when you are planning to shoot a film in Assam starting from the third week of April, obviously you have to factor in rain as an uninvited guest who is going to visit you unannounced sometime or the other. We were prepared to greet rain with an open mind… or so we thought. We were ready to face the rain… or so we thought! It started in the second half of the first day’s shoot. And continued, for the next three days or so. Forget shooting, it was a challenge to take a few steps outside, even with the umbrellas. Being a ‘smart planner’, I had planned maximum outdoor sequence in the first week of the shooting schedule. ‘After all, chances of rain progressively increases as we move near to the monsoon’ – was my ‘smart reasoning’. And accordingly, the indoor locations of the film was planned for the second week of the shoot and was under construction keeping that deadline in mind – so there was no scope of moving indoor to utilize the time… The combined consequences of all these factors resulted in us being almost 25% behind schedule in the first week itself (of the total 20 days of shooting schedule)!

But just when I thought that I had enough of playing God and would have to re-work the script to make concession for the fury of nature, Mother Nature decided to show us her kinder side… In an eerie way, it started raining at night and stopped at the crack of dawn – just in time for our shoot to start on schedule in the morning…with a newly bathed, fresh earth to welcome us, almost every day!

Ans: We are a family of 3. My wife Pallavi is an editor. Both ‘Guns & Guitars’ and ‘Xhoixobote Dhemalite’ has been edited by her. She also does production design for my films. And the centre of our universe is our five-year old daughter Mou (Hiya).