An Ode to Radio Telegraphy

‘My HF Receiver suddenly went on clear voice “PAF ONE CRASH-LANDED”. I was frantic with worry and pressed the record button instantly. With the President on board, it was a mock drill at Keti Bandar near Karachi.’

The passing vehicles are the only noise that disturbs the tranquillity of rural India. Those were the days when the only entertainment was the ubiquitous transistor. We were diehard devotees of the three band radio. We walked in the night to get the signal and surfed on a tiny knob for navigating national/international radio stations. Those were a real feast to our ears where we spent our childhood in the village. Being an air warrior, we felt passionately in love with the erstwhile radio, while our postings in rough terrains still haunt me to this day. Today a flash of memory passed about that time of my life. Life was beautiful and lonely there.

Apart from listening songs, sometimes we tuned to short hum after hum, etc. at Shortwave. Also we observed a continuous relay sound from the nearby airport. We failed to understand what it actually was? Encyclopaedias were beyond our reach. I wonder what if Google had never been invented. My career with IAF had bought me to across some mysterious sounds. One of them was the VHF Omni-directional broadcast of Aerodrome identification. They are weird Morse Codes heard over Short Wave.

At age 18, I was learning ABC. It is like saying the fall of Drona: ‘Aswathama Hatha, Iti Narova KunjaRova’. But they are actually a Morse Code used in WT - Wireless Telegraphy. After 12th, we 211 trainees, were undergoing a course in Radio Communication at CTI Jalahalli West Bangalore in 1988. Morse code is a character encoding scheme used in telecommunication that encodes text characters as standardized sequences of two different signal durations called dots and dashes. Learning Morse code is like learning any language. It is like learning a bicycle. Once you learn it, you will not forget it in your lifetime. The incidents happened in a flicker but those memories are forever.

Morse is named after Samuel FB Morse, an inventor of the telegraph in 1836. It is widely used from defence to civil aviation and international communication for ships in distress. Morse officially stopped being used on the world’s oceans from 1999. Nowadays, it is has been replaced by Morse Code Decoder/Sender using ham radio software that decodes received CW (Continuous Wave) audio. To ensure safety of flight, modern navigation receivers automatically translate the code into displayed letters facilitating the identification process. SOS (Save Our Souls or Save Our Ship) is most popularly associated with emergency Distress Signal worldwide. 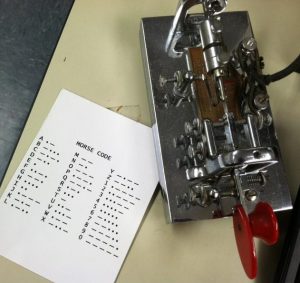 It was a harrowing task to interpret those signals. For learning Morse it is recommended that one does not try to remember dots and dashes, but remember the sounds instead. Besides letters, there are Punctuation Marks, Prosign, Abbreviation and Q Code. Our Instructor Warrant Officer Taneja used to play music with dots and dashes. The ringing of a school bell tells a student to follow the school schedule. The long ringing of the bell was remembered as delight, so does with AR (dit-dah-dit-dah-dit – which means the end of transmission) at Lunch that provided some respite from the burgeoning 20 speed of Morse WPM.

WT had been one of my weakest points. I had somehow qualified. But my Morse journey in WT circuit continued till my VRS. In Western Command, the WT channels of Leh, Kargil, Thoise, and Awantipur of Northern Kashmir were very weak, noisy and fading signals. Unlike voice, Morse required very strenuous efforts to receive signals. There was no OFC network in those snow-covered region. Field Telephones were absurd and what we heard when lines crossing (one way telephone). The other end operators were struggling to withstand with the cold desert. Later on, we came across Tele-Printer, Tape-Relay, Trans-Receiver, DMSS (Data Management System Simulator) and Shortwave HF Receiver. But WT is the only answer to receive/send cryptographic message. In Radio Telegraphy, wireless carries a vital role as it can easily be connected to any long range communication as it is more reliable than the long range voice circuits.

Further at the Meteorology Channel, I came across forecast, temperature, real-feel, wind, precipitation, rain, snow, ice, sky, UV index, cloud cover, humidity, dew point, visibility, temperature, sunrise/sunset, moonrise/moonset, etc. We learned the know-how to predict weather – it’s amazing! Those were such monotonous hourly report at 24X7 from difficult channels of low signal strength and intelligibility for ATC. We experienced those faint noises right at night, while drifting off to sleep and kept awakening in between.

It was a harsh winter during January 1990 when I was undergoing my promotional examination to Leading Aircraftsmen at Chandigarh. My fingers had almost become frozen. I was dispirited by the uncomfortable conditions for WT test on the first day. Within an hour, half of our unit were given RTU (Return to Unit) orders. It was very disappointing indeed to return back to base. There was something amiss at the second attempt. I was so close and yet so far. I lost hope but did not give up. My friend Ajanta and Paresh were affable to me and sent me a light-hearted note, “Examinations may come and go what stays behind is the journey of that joie-de-vivre during Bhogali Bihu”. It was full of trivial but amusing chatters. My prayer to God had finally been answered. And we (three) flew together by Gajraj, the jumbo IL-76.

It sounded like the French word m’aider (MAYDAY) which means ‘help me.’ It is an international Distress Signal voice procedure broadcasted internationally in radio communication by aviators and mariners. 121.5 Or 243 MHz channels are known as Distress/Safety calling frequencies. Nowadays, it uses digital 406 MHz signals. The Radio-Telephone Distress Call is the Distress Signal MAYDAY (spoken three times) and it was its call sign (spoken once). My HF Receiver at Siot Dett (Indo-Pak Gujarat border) suddenly went on clear voice “PAF ONE (Pakistan Air Force One - call sign of Pakistan President aircraft) CRASH-LANDED”. I got frantic with worry and pressed the Record Button instantly. With the President on board, it was a mock drill at Keti Bandar near Karachi.

My learning of WT has passed three decades. But the NATO Communication Instructions of Radio Telegraph Procedure – ACP 124(B) still haunts me as it had always been an integral part for Radio Technicians. Gone are those days of Radio Telegraphy today and most of our entry mates were taking discharge from service and are settling in different parts of India. There was no contact amongst us until social media finally brought back together our friendship. Recently, we reunited through a WhatsApp group, ‘Purely RT-152’, which was formed at the initiative of Trivedi. And life is moving back to the Jalahali days after 30 long years. Discovering our past can be fun. It’s easy swiping across the touch screens but today I nostalgically recall those varied paths of radio telegraphy on the New Year.