An Ode to the Mother Goddess

Devi Durga, as we all know, is worshipped as an embodiment of creative feminine force or Shakti, believed to be the fierce form of Lord Shiva’s wife, Parvati. She is the Mother of the Universe, revered for both her gracious as well as her terrifying form. The SkandaPurana indicates that the name of Durga is given to the Goddess Parvati, consort of Lord Shiva, when she kills the Asura. A myth from the Devi Mahatmya, however, states that the Goddess acquires this name when she kills the demon Durgama. Her qualities as a goddess are denoted by her names as well. She is Universal Mother. As Uma, Lord Shiva’s wife, she is seen as a protector and a mother figure.

Goddess Durga is the symbol of 3 states: Creative, Preservative and Destructive. Various forms, likeDurga, Chandi, Mahakali, Mahalakshmi and MahaSaraswati are Her divine forms. Each form of the Devi has a distinctive role meant for a definite purpose. The Devi, is depicted as one supreme Goddess and also as many goddesses.

All Hindus celebrate Durga Puja at the same time in different ways in different parts of India as well as around the world. In the northern part of the country, the first nine days of this festival, called Navaratri, is commonly observed as a time for rigorous fast, and followed by celebrations on the tenth day. In western India, throughout the nine days, both men and women participate in a special kind of dance around an object of worship. In the south, Dusshera or the tenth day is celebrated with a lot of fanfare. This day sees millions of Hindus celebrate the festival which marks the end of evil, as depicted by the burning of huge effigies of Ravana, Kumbhakarna and Meghnad, the three demon brothers, Ravana being the king of demons. All three were defeated by Lord Rama on this day. Although, the universal nature of the festival is often found to transcend regional influences and local culture, the Garba Dance of Gujarat, Ramlila of Varanasi, Dusshera of Mysore, and Durga Puja of Bengal, Assam and Tripura need special mention.

DurgaPuja gained prominence in Bengal during the rule of the British Government and post-Independence, the festival has become one of the greatest festivals celebrated in the States of West Bengal, Assam, Jharkhand, etc. Originally held in the Bengali season of basant (spring), Durga Puja was called Basanti Puja. Durga Puja is celebrated every year in the Hindu month of Ashwin(September-October) and commemorates Prince Rama's invocation of the goddess before going to war with the demon king Ravana. This autumnal ritual was different from the conventional Durga Puja, which is usually celebrated in the springtime. So, this Puja is also known as ‘akal-bodhan’ or out-of-season (‘akal’) worship (‘bodhan’). 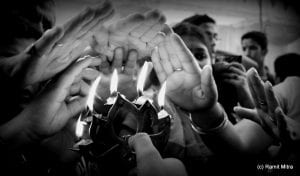 Thus, goes the story of Lord Rama, who first worshipped the ‘MahishasuraMardini’ or the slayer of the buffalo-demon, by offering 108 blue lotuses and lighting 108 lamps, at this time of the year. In the Hindu epics, Mahabharata and Ramayana, there are various references to Goddess Durga. When the Pandavas entered the capital of Virata for their period of one year in disguise, they propitiated GoddessDurga who appeared before them and granted them boons. Again, at the commencement of the great war of Kurukshetra, Lord Krishna advised Arjuna to worship Goddess Durga to ensure victory in battle.

The first grand worship of Goddess Durga in recorded history is said to have been celebrated in the late 1500s. Folklores say that the landlords or zamindars of Dinajpur and Malda initiated the first Durga Puja in Bengal. According to another source, Raja Kangshanarayan of Taherpur or BhabanandaMazumdar of Nadiya organized the first Sharadiya or Autumn Durga Puja in Bengal in c 1606. The origin of the community puja can be credited to the twelve friends of Guptipara in Hoogly, West Bengal, who collaborated and collected contributions from local residents to conduct the first community puja called the ‘baro-yaari’ puja or the ‘twelve-pal’ puja in 1790. The ‘baro-yaari’ puja was brought to Kolkata in 1832 by Raja Harinath of Cossimbazar, who performed the Durga Puja at his ancestral home in Murshidabad from 1824 to 1831. The ‘baro-yaari’ puja gave way to the sarbajanin or community puja in 1910, when the SanatanDharmotsahini Sabha organized the first truly community puja in Baghbazar in Kolkata with full public contribution, public control and public participation. Now the dominant mode of Durga Puja is the ‘public’ version. 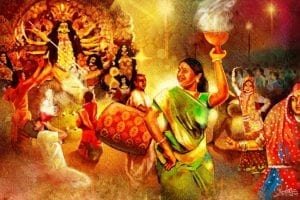 According to the chronicles of history, the festival in the State of Assam was started by Susenghphaa or PratapSingha, the Ahom rulers of Assam. The festival is celebrated in every part of the State with grandeur and fervor.However, the celebrations in the Barak Valley region, which is dominated by the Bengali community, is worth watching. In Silchar, over 300 pandals are decorated with lights and competitions are held between the pandals. One month before the actual puja day, the environment in the entire State brightens up with festive mood. People go for shopping as new clothes are worn on each day of the Puja. It is mainly a five-day festival, which starts with Shashthi, followed by Maha Saptami, Maha Ashtami, MahaNabami and Dashami or Vijayadashami.

During the day time, people visit the puja mandaps to offer prayers to MaaDurga and seek her blessings for prosperity. In the evening, people dress up in their new attire and visit the pandals that are set up displaying the idols of GodessDurga killing Mahisasura. It also comprises the worship of Shiva, the consort of Goddess Durga, Lakshmi, Ganesha, Saraswati and Kartikeya, who are deemed as her children. The most important form of Durga is as ‘MahishasuraMardini’ or the slayer of Mahishasura (the demon king). The image is of the Goddess cutting off the head of the buffalo-demon. This image usually most commonly is shown with eight or ten arms, and the hands hold a trident, an axe, a discuss, an arrow, a sword, a mace, a spike, a bow, a bell and a snake. Mahishasura, the demon, may be shown half emerging in his human form from the carcass of his former buffalo form. She has an extra divine eye in the middle of the forehead. Her hair is in Karandamukuta, a crown style of hairdo. She wears gorgeous red clothes and several ornaments, and stands on a lotus or the head of a buffalo or rides a lion. There are endless aspects of Durga described in the Puranas and Agamas (ancient Hindu texts) and the iconography is consequently varied. 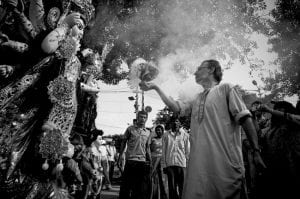 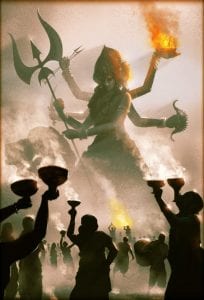 The idols, worshipped during the festive season, are crafted from a special clay procured from the banks of theRiver Ganges. These idols are crafted by skilledidol-makers using a wide array of alternative materials, the range limited only by imaginative creativity. The most common of these of course is clay. However, other innovative media like shola pith, coconut husk, cloth, and flowers, amongst others, are popularly used. Legend has it that the idol of the goddess is incomplete without a pinch of clay from a prostitute's courtyard. This probably was society's attempt to include and accord status to its most alienated beings.

Just as the arrival of MaaDurga is important, so is her mode of transport for arrival as well as departure (on the day of VijayaDusshmi). Her arrival and departure are considered very significant as her mode of transport on both days indicates the fate of the days ahead. Her vahans or modes of transport are considered to be indications or omens. MaaDurga arrives on – an Elephant, a Horse, a Palanquin or a Boat. Which mode will be used for arrival and departure is decided based on the day of the week or on the day of Ghatsthapna and VijayaDusshmi, i.e. the first day and the last day. The Elephant indicates peace and prosperity and so,MaaDurga arriving or departing on this vahana means she’ll be filling your life with good deeds, blessings, results of your hard work and happiness. The boat is a sign of water transport, which represents both flood and good harvest. MaaDurga arriving on this or leaving would mean she would bless you with everything that you need to reach your ultimate desire. The Palanquin is represented by four men carrying a person on a haulier; here, it means the outbreak of an epidemic. MaaDurga arriving or departing on this vahana interprets that unless, humans help each other and stand united, the upcoming epidemic would be their toughest journey ever.

Goddess Durga represents the Divine Mother. She is the energy aspect of the Lord. Without Durga, Shiva has no expression and without Shiva, Durga has no existence. Shiva is the soul of Durga; Durga is identical with Shiva. Lord Shiva is only a silent witness. He is motionless, absolutely changeless. He is not affected by the cosmic play. It is Goddess Durga who does everything.

A child is more familiar with the mother than with the father, because the mother is very kind, loving, tender and affectionate and looks after the needs of the child. In the spiritual field also, the aspirant or the devotee, the spiritual child, has an intimate relationship with Mother Durga, more than with Father Shiva. Therefore, it directs the aspirant to approach the Mother first, who then introduces her spiritual child to the Father.

The Mother’s Grace is boundless. Her mercy is illimitable; her knowledge infinite; her power immeasurable; her glory ineffable; and her splendor indescribable. She gives you material prosperity as well as spiritual freedom. Approach her with an open heart. Be as simple as a child. Kill the enemies of egoism, cunningness, selfishness and crookedness. Make a total, unreserved, and ungrudging self-surrender to her. Sing her praises. Ask her for mercy for your sins. These ten days are very sacred to the Divine Mother. Plunge yourself in her worship. And our Mother will bless us all!