An Overview of Child Beggars in Guwahati

We often see child beggars, including crippled children, on the streets of Guwahati, roaming the intersections and walking between cars asking for food/money. We see them begging at railway platforms, bus stops, parks, near cinema halls, in front of hotels and restaurants, in markets, near temples and durgahs, and from houses to house as well. They often pull our clothes and beg. The State Social Welfare Department launched a mission and tied up with seven NGOs of the city few years back to make Guwahati free of beggars including child beggars. But many women and children are still found begging in the city. Instead the numbers seem to have grown in the last few years. There are thousands of child beggars in Guwahati and the majority of them are in the age group of two to 13 years. There is currently no official figure of the number of child beggars in Guwahati as it is difficult to obtain accurate data about them due to their floating character. 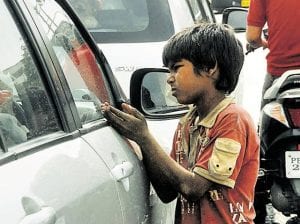 The young street children and street girls are largely engaged in begging in Guwahati. They may be orphans or runaway children. They are homeless children who live in unsafe places such as streets, railway platforms, parks, near temples and durgahs, in markets, under flyovers and bridges, near bus depots and stops, in makeshift huts in slums. Some of them sing and dance for begging. They cannot get food properly though they beg for their daily food. They hardly earn Rs. 50 a day. Other beggars and police frequently steal their earned money. Actually, these little street children struggle to live.

Some people living in the slum areas of Guwahati are so poor that they cannot even sustain themselves. The children of these poor people become child beggars to help their own families. Few child beggars belonging to the poor families of the nearby villages of Guwahati visit the city daily either alone or with their family members. They come to the city in the morning, beg the whole day and return home in the evening. In some cases, the parents or siblings of these child beggars are sick. They beg and collect money for their treatment and food. The children of these poor people beg because they don't get work – child labour is a crime. Some child beggars are the children of people who are substance abusers. Their mothers cannot run their families alone working as labourers. They start begging to help their mothers. Sometime, begging is often imposed by family members. They think, it's better for the children to beg than working themselves. 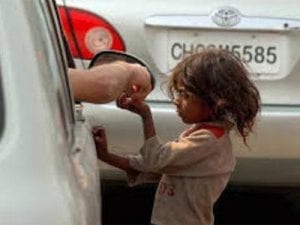 There are some 'commercial' child beggars in Guwahati. Their number is not known, but we can see them everywhere in the city. Most of them are trafficked children from other states and the trade of begging is running by some groups.

These children are left in the public places for begging in the morning by agents. The agents come again in the evening and take them back. There are special houses for them. They stay indoors at night and come on the roads during the day time only.

The child beggars who are forced to beg by these third parties are often removed from their families, surrender the majority of their income to their exploiter(s), endure unsafe work and living conditions, and are at times maimed to increase profits. A significant number of these child beggars have had limbs forcibly amputated, or even acid poured into their eyes to make them blind since disabled child beggars attract sympathy and earn more money than the healthy ones. In addition to inflictions such as blindness and loss of limbs, other physical abuses for the purposes of heightening profits include pouring chilli pepper on a child's tongue to give the appearance of impeded speech, the use of opium to elicit cries, and administering injections of drugs that will increase a child's energy and alertness.

These days, the child beggars in Guwahati are committing many crimes. A small section of the child beggars is engaged in activities like stealing, pick-pocketing, drug-peddling and prostitution. Substance abuse is an important concern affecting older child beggars in Guwahati. Majority of the substance users are in the habit of sniffing Dendrite regularly. The other most commonly used psychoactive substances are alcohol, tobacco, cannabis, whitener, cocaine, opiates or hallucinogens. Few of them use intra-venous drugs also. Most of them use more than one type of substances. Further, many of the gangs which run the network of forced begging are involved in drug-peddling; thus the children under their control often become drug addicts.

The child beggars have little hope for their future; in fact, they hardly believe that they can have a better future. This leaves them extremely vulnerable with many of their physical, mental and social needs remaining unfulfilled. The conditions in which begging takes place commonly expose the children to further physical and verbal abuse, including sexual victimization and police brutality. Most of the girl child beggars are molested and raped. The children engaged into begging primarily receive little to no education. These children are exposed to serious health hazards due to unhygienic conditions of living. They face vulnerability because of their lack of access to nutritious food, sanitation, proper shelter and medical care. They have much higher instances of HIV infection due to lack of awareness and supervision. 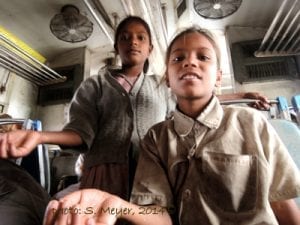 The problem deserves specific attention from the authorities concerned. The State needs effective legislation to punish both child trafficking and forced begging. NGOs and administrators of government should reach out to these child beggars for their comprehensive needs that include education, health care, protection and rehabilitation.

Orphanages and shelter homes are required to assist child beggars without families. A proactive role from the city dwellers is essential to make the city free of child beggars.