APPLICATION OF VAASTU IN CITIES OF INDIA

Vaastu was applied while designing several cities of India which are now leaders in the field of business. Jaipur, the capital of Rajasthan, has been planned as per the guidelines of Vastu Shastra. It was founded by Maharaja Sawai Jai Singh in 1727 and designed by Vidyasagar Bhattacharya following Vaastu norms. The city was built in eight part Mandala or grid following the Vaastu Mandala. The city was divided into nine blocks with two blocks allotted for the palaces and State buildings and the rest seven for public. The commercial area has nine shops in one block of cross street which is according to the nine parts of a direction in Vaastu. All the streets and roads are either East-West or North-south.

Historically, Jaipur is famous for palaces, forts and temples. Needless to say, they were all built following Vaastu norms. That is why they are flocked by tourists.

Most of the effluent houses in Jaipur are built in the (mansion) style just like other towns of Rajasthan. The havelis are provided with two courtyards. The inner courtyard is usually bigger allowing the vacant Brahmasthan while the outer one is smaller. The space between the two courtyards is designed in such a way that the inner one receives a cool air draft from the Kota stone or sandstone walls. So this inner courtyard becomes a comfortable place for the residents to relax. There is invariably a Tulsi plant in the courtyard.

Le Corbusier, a French architect applied the principles of Vaastu Shastra with modern architecture while designing Chandigarh. The master plan of Chandigarh is similar to the Vaastu Purush Mandala.

The Capital complex is situated at Sector one, which is defined as the head of the city. The main city Center is at Sector 17 which is the heart of the city. It has lungs on both sides in the form of open areas, parks and fields. The roads and streets are analogous to the circulatory system. Almost all residential sectors have an open space in the centre which the houses built around it in a grid.

The recently developed area of Dwarka, a suburban of Delhi, is built following Vaastu norms. It has become a favourite place for new settlers in Delhi as the main City has become too expensive and crowded. The Vidhan Bhawan in Bhopal has been constructed as per Vaastu.

TIPS FOR SUCCESS IN BUSINESS: 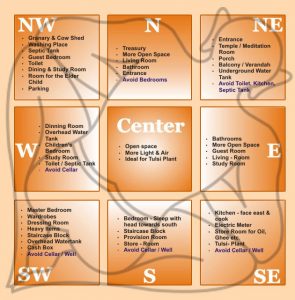 What is the significance of different directions according to Vaastu?

Ans: We have been discussing these in my articles. Since you are a student I like your interest in the subject and I am listing the Vaastu rules for different directions again as you may have missed them. Besides the four major directions i.e. North, South, East and West, there are four other directions at the four corners. They are Northeast (Eashanya), Southeast (Agneya), Southwest (Nairuthi) and Northwest (Vayuvya).

The East: The positive rays of the early morning sun enter our house from this direction. These rays are loaded with Ultra Violet (UV) rays which can destroy bacteria and negative energy. It is beneficial for the owner and the children to have the main door in this direction with lot of windows. The energy of this direction is mellow and spiritual. The children should study facing the East. Auspicious symbols on the door at the East can magnify the positive effects. It is extremely auspicious to have a water body at the East.

There should not be any dust bin, garbage or stack of stone or bricks in the East. This will affect children, name and fame. Problems of the bones and the heart are encountered.

The North: Because of the northward movement of the sun (Uttarayan from 14th January to 14th July), the North direction has an equal importance like the East. There should be more doors and windows at the North. It is very auspicious to have the main entrance at the North too. The North is responsible for wealth and any defect here will affect finances and career. Since the North is ruled by the water element, it is good to place an aquarium or wash basin at the North.

A defective North deprives one of love of mother, and respect and love from subordinates and servants. Several health problems related to the heart, chest, skin, gall bladder, hernia and blood are seen.

The South: This direction should be kept heavy and high to counter the potent rays of the sun. Keeping heavy items at the South will make the North lighter and hence will benefit the residents. As far as possible, avoid openings at the South except for the necessary windows and doors (for South-facing houses or flats).

Mars is the ruling planet at the South as well as Lord Yama. Mangal imparts life force, enthusiasm, bravery and happiness. People under good influence of Mars become important persons in the society.

There should not be any garbage or old and unused stuff at South. Defective south affects the health of the ladies more so for pregnant ones. Losses in business and job are often due to defects in the south.

The Northeast: The water element rules this direction. The underground water tank, wells, ponds or deep tube wells should be located at the Northeast. It is very good to have the main entrance at the northeast. This direction is also responsible for career, growth and development. It should never be blocked. Toilets, kitchen, garage or staircases are forbidden at the Northeast.

The Northwest: The air element rules the Northwest. The owner of the house should not reside in this direction. This is fit for the guest room, servant or staff quarters, garage, cowshed and pet house, etc. Marriageable daughters should sleep in the room at Northwest.

The Southwest: The earth's magnetic force is at its maximum at the Southwest. This should be loaded and never kept light. It is recommended to keep money and other valuables at the Southwest. Water bodies are forbidden here. Even toilets, kitchen and staircases are to be avoided at the Southwest. The defects at Southwest affect the owner, the spouse and the eldest child. Problems related to the legs and the posterior are encountered.