Archaeological Sites of Assam – Who Will Protect and Preserve Them? PriyamKakoti Bora

The recent news reports about the painting of Rang Ghar in white colour compelled me to pen my feelings as a commoner and traveller about the status of some of the heritage sites located in Assam. My recent visits to archaeological sites in and around Guwahati has left me sad, angry and ashamed at the state of affairs of some of the most beautiful places in Assam. I am yet to see the current state of monuments and sites in Upper Assam and many other places but what angered me the most was that the highly esteemed government cannot even maintain a site which lies at the back of their office in Ambari, Guwahati.

There are 80 centrally protected monuments/sites under the jurisdiction of the Archaeological Survey of India, Guwahati Circle, out of which 55 are in Assam. As a travel blogger who hasrecently returned home after staying for many years outside Assam, I was eager to see all these places (and more) again and share the rich history of Assam with the world. But the sad state of most of the places has left me demotivated to do anything about it. As a commoner, I am not even aware of how to bring it to the attention of the concerned authorities. Hence the attempt here is being made to bring light to the history we might end up losing if we choose to ignore for long. 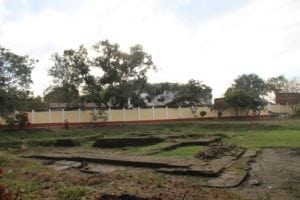 This archaeological site was discovered accidentally while digging the foundation for the Reserve Bank of India building in Guwahati, back in 1969. Under the Ancient Monuments and Records Act, 1959, the Assam Government decided to protect it as an archaeologically important site of the State on 10th October, 1969. Between the years, 1970 to 2003, the place saw various excavators and the findings made it into two distinct cultural periods, ranging from the 7th to 12th century AD and 13th to 17th century AD respectively.

Various sculptures and forms of pottery were found during the excavation –Indigenous and foreign, along with beautiful pieces of Terracotta art, all suggestive of an ancient and rich Kamarupa. Thefindings pointed to the possibility of Brahmaputra valley civilization along with trade contact of ancient Kamarupa with Central India and China.

When I visited the site earlier this year, my major hurdle was finding the place. I knew from Google Maps that it is located near the Press Club, but I was having a hard time finding the entrance. Finally, I saw an old, rusty signboard and went in only to be dejected to see what is inside.

I had done my research about the archaeological site and had read about its resemblances to the Indus Valley civilization. The Assam State Museum in Guwahati exhibited many findings of the site and therefore, my expectations were filled to the brim. I was expecting a site somewhat like the one shown in the photos of the Government website but instead, I found no signs of an excavated site. Only some parts of the walls were visible, and the entire place was covered with green moss and wild grass. The excavations have been filled up and there was no one around who was bothered by our presence.

I returned with a heavy heart. Mostly, because the ASI office was right in front of it. While other States take pride in showing off and preserving their history, we clearly have no issues letting go of every trace of an ancient kingdom which prospered in its hey time.

Known as the 'Khajuraho of Assam', the Madan Kamdev temple is an archaeological site in BaihataChariali, about 40 kilometres from Guwahati and is of both historical and mythological importance. It is believed that the Indian God of Love, Kamdev was resurrected at this spot with the blessings of Lord Shiva and was reunited with his consort, Rati Devi. And that's how Kamrupa derived its name for being the land of Kamdev's rebirth. 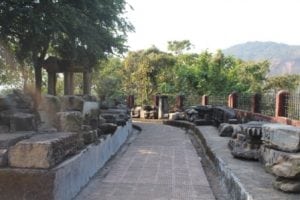 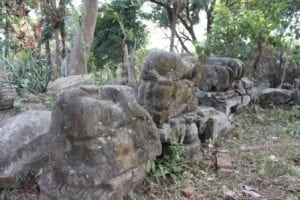 On my recent trip to the Madan Kamdev Temple, I found the empty plot of field before the ascent, crowded with various picnic parties. They have been celebrating every weekend and litter was found everywhere. I climbed up the Diwangri hill towards the temple and found a park with the gate closed. On asking the earthen-lamp seller, I got to know it is the archaeological park with some old sculptures and it has been closed as a new museum has opened on the other side of the hill. However, I had a look inside the gate and found that many sculptures were left in the open and not yet moved to the museum. I entered the temple complex and found more sculptures kept out in the open, around the main temple. Since these are left at the mercy of the weather Gods, the stone sculptures looked worn out/blackened and some of them started to have cracks in them.

Upon enquiry, I got to know that the ASI officials rarely came over to look and maintain the archaeological site and left all responsibilities on the temple management committee. Following some youngsters, I jumped over the fence separating the temple and park. There were some beautiful sculptures engraved on stone but only to be left abandoned, covered with wild grass and moss.Monkeys were prowling around the entire park, jumping over the stone sculptures and waiting for their chance to claim the leftovers from the picnic celebrations that were going on down the hill.

Helpless at the sight of what we had done to our remnants from Golden Age, I could not even dare to visit the museum upon my return. I hurriedly returned to the city, thinking of ways on how I can raise awareness on this evident negligence of authorities on our rich history.

Situated on the Madanachala Hill in Hajo, the Kedar Temple is another archaeological marvel and regarded as one of the oldest temples in the Indian subcontinent. It is mentioned in the KalikaPuranaas well as the Yogini Tantra. Dedicated to the Lord Shiva, the main idol inside the temple is a big Linga of stone, called 'Swayambhulinga' (self-manifested). This linga appears to be an 'Ardhanariswara' (a composite androgynous form of the Hindu deities Shiva and Parvati). The Lingais always kept covered with a big metal bowl.

It is difficult to ascertain the date of construction or to name the founder of the main building of the temple. An inscription attached to the temple shows that Ahom King RajeswaraSingha (CE 1751-69) had erected two masonry walls along the temple. In 2005, it was proposed to be included in the ASI list of protected monuments.

I arrived at the temple, to a series of stairs that seemed far from being looked after. But what horrified me the most were a couple of stone sculptures that were left abandoned beneath these stairs. 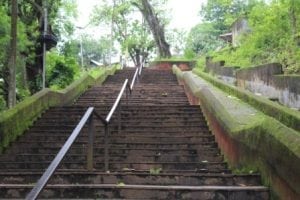 I walked up to the temple complex only to find more stone sculptures laid out in the open, with no care or maintenance.

I was traveling with a fellow travel blogger on this trip and she questioned me why these beautiful sculptures are not preserved well. She even suggested that the least the authorities could have done was to keep them safe under a shaded house. I had no answer for her queries because I had too many questions of my own.

All these experiences have left me questioning whether we would be able to preserve our history. We may have been able to push back the Mughals in the Saraighat War, but we are not even trying to spread the awareness about the brave warriors of Assam.

On one hand, we pride ourselves in being a State with many tribes and communities and yet we do nothing to keep the traces of our ancient kingdoms alive. I am very proud of my State, of what it used to be, but I am not sure that the future generation will even know what a rich heritage we had.