When you meet him in person, this soft spoken man with a gentle demeanor gives you the feeling of being surrounded in an oasis of peace and tranquility. But as you look deeper into his eyes, they tell volumes of hardship and internal turmoil that once ravaged his entire being but which he has managed to reconcile with. This totally unassuming artist from Bodoland, who has made a mark in the international art circuit, is an enigma of sorts – an epitome of a person who has overcome the greatest of obstacles and the most unfortunate of circumstances to emerge as a satisfied and self-contented human being.

In this issue of mélange, we would like to introduce our readers with Maneswar Brahma – one of Assam’s most prominent contemporary artist and printmaker. Hailing from Hallimpara Subhijhar – a remote village in present-day Bodoland Territorial Council (BTC), Brahma is one of the very few artists to have bagged the prestigious Lalit Kala Akademi Award, Kejriwal Young Artist Award, Karnatakam Chitrakala Parishad Trust, South Central Zone Cultural Centre in Nagpur, and an award from the Department of Culture under the Indian Ministry of Human Resources. Besides these accolades, he has showcased his artworks and prints in numerous group exhibitions across India, Europe, Finland and Japan. 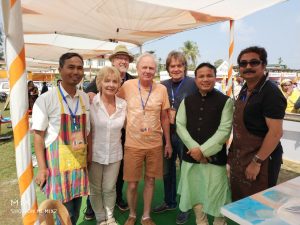 But more than his achievements as an artist of international repute, Brahma’s life journey and the hurdles that he had to overcome to reach this present stage is even more inspiring. Born to an agrarian family in an economically backward region, Maneswar Brahma has overcome many challenges – right from his decision to pursue art and from recovering from a dramatic abduction and shoot-out which almost took his life. In 1995, Maneswar Brahma was riddled with bullets by unidentified insurgents and was left to die in the forests in a tragic case of mistaken identity. Although riddled with more than 12 bullets from automatic carbines and AK-47 rifles, he miraculously survived. Despite his natural arm (right arm) being totally destroyed during the attack, he continued to follow his passion by using his left hand, to finally emerge as one of the country’s finest printmakers today.

Today Maneswar Brahma is working in Srimanta Shankardev Kalakshetra as the in-charge officer of the Lalit Kala Akademi division. However, the dramatic abduction and murderous attempt has left an inedible impression in his mind, and the same is reflected in his art works. The artworks, mostly paintings and graphics, are realistic but reflect a predominantly pensive mood. Black is a recurrent colour, but Brahma also uses red and other bright colours to good effect. Noni Borpuzari, an Assam-based senior artist and one of the finest print makers of India, is full of praise for Brahma. Commenting on the manifestation of harsh realities in Brahma’s works he says, “Brahma’s power of observation and tireless attempts at expressing events around him through a creative medium is noteworthy.”

One particular series of his art works titled Victim, for which he got the Lalit Kala Akademi award, depicts the horrifying events of his own life and reveals the agony of victims of insurgency. The powerful lines, dark colours and stark images laced with a strong anti-terrorism message have also caught the attention of art connoisseurs. Noted art critic Rupanjali Baruah had opined, “The first impression that is discovered in Maneswar Brahma’s art is the vivid actuality – it throbs with the pulse of a moment. The apparent honesty of his interpretation of violence and how it impacted upon his deepest sensibilities may come as a shock as these images provide acute psychological insights. Brhma’s choice of half-length format of figures makes him concentrate purely on the attributes of a wounded body with immediate distorted thoughts of revulsion that run through the mind of the victim – in this case, the artist himself. The predominant use of black intensifies the artist’s later subsequent obsession of dark irrational side of human consciousness. Black provides the necessary leitmotif to each of his paintings as he was probably sinking into the unconscious mode of a dying man; his bullet wounds become the serrated indentations on the bodies drawn on his canvas. They tell us how black overshadowed all the light in his consciousness for some inexhaustible life-saving moment. His world too is the world of blood splattered mayhem that does not let him inherit pleasant dreams. Brahma’s world has turned cold where the eyes of the wounded slither out of its hole as they had risked once being stoned or mutilated, his muscles and sinews thus carry the great hurt in his soul but he is willing to wait for the night to grow to move out of those difficult days. His emotional anguish heightens with every episode of his life struggle and yet he discovers a kind of salvation by portraying those episodes on the blood stricken figures on his canvas.” 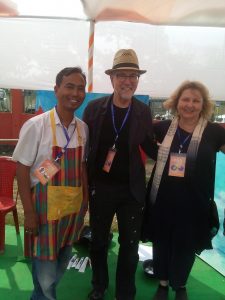 In a recent absorbing discussion with mélange, Maneswar Brahma talks about his journey so far. Following are excerpts:

Ans: I was born in a remote village Hallimpara Subhijhar, located in the western side of the Manas Tiger Reserve. I don’t know the exact year in which I was born but our school teachers had given us an official date of birth to help us complete our education. We lived in the peripheries of the deep jungles and grew up in the midst of nature and typical agrarian society. We were not rich and my father, being an agriculturist, managed to provide us with the basic means of livelihood. My father was late Upen Chandra Brahma while my mother Chande Brahma was a housewife; we were six brothers and sisters.

I got interested in art when a school teacher introduced us to painting by drawing a mug in the classroom chalkboard. I somehow developed an interest in art somehow and began practicing at home This interest got deepened when I saw a solo exhibition of Sobha Brahma sir in Kokrajhar. After I went to Kokrajhar for my high school education, I met an artist Lakhikanta Brahma of Chitralekha Studio who used to spend his time painting signboards and hoardings. I met him and asked him if I could make signboards so as to supplement my family income. So gradually I began painting for signboards and hoardings. I learnt a lot from Lakhikanta Brahma and he first inspired me to go to Vishwa Bharati University to take up art properly. I practiced a lot but could not get the admission and retuned back to Kokrajhar in 1990 after which I joined the Kokrajhar Art College as an informal student. Under Biren Boro’s guidance, I enrolled in the Bachelor of Fine Arts course of Shantineketan in 1992.

Ans: When the Bodoland movement started, we did not get many opportunities to study. My father thought that I would become an agriculturist at the end. However, my father had a soft corner towards my passion for drawing. He used to invite all villagers to see my artworks which he used to adorn on the walls of our home. So when I announced my decision to go to Shantineketan, he supported me whole-heartedly. Although our finances were weak, the course charges were very less at that time and my father supported my decision.

Ans: When I went to Shantineketan, Bodoland was undergoing a lot of internal strife and crisis and lot of internal divisions and conflicts had begun within the activists. The BLT and NDFB came up during that time to protest against the council present at that time. People were killing each other and conflicts keep occurring in each and every part of our land. Many people died on mere suspicion and misunderstandings.

Since I was in Shantineketan, I was not much aware of these internal happenings. On October 10, I had come home for my Puja holidays. An artist in Kokrajhar had asked me to bring some colours from Shantineketan. When I was coming back from his house, a few unknown people abducted us and took us to different areas. I told them that I was a student of Shantineketan but they ignored my please and said that the high command wanted to meet us. At that time, I thought they would either kill me or ask me to join their outfit. After roaming around many villages and after being handed over to different groups, they finally took us to a firing ground at Kokrajhar in the morning and riddled us with bullets. They left thinking that I was dead.

Somehow towards the evening, I got a fresh burst of life and made my way to the Kokrajhar College’s Boy’s Hospital. I knocked at numerous doors but no one opened the door. I saw a light shining in Room No 4 and those boys somehow took me to the hospital with the help of the Punjab Commandos. However, the doctors in the local hospital could not be of much help and I was taken to Gauhati Medical College where I got a fresh lease of life.

And: The bullets had hit me mostly on my chest, stomach, right arm and cheek. The GMC authorities said that I had received 11 bullets. I still don’t know why I was targeted but later on I realized that it was a case of mistaken identity. I never tried to know the reason because I came to know that it was a case of suspected identity. And the situation was so bad at that time that even the insurgents did not have time to seek clarifications from the victims. I remember that one of my shooters was just a 10 year old kid so I don’t really know whom to blame.

Ans: When I recovered a bit, all the teachers and students of Shantineketan asked me to come back. My right hand was destroyed and I had to draw with my left hand. I mostly worked on lithography so the process of rolling while preparing prints acted as a kind of physiotherapy and helped develop the numbness of my right hand. I spent seven years in Shantineketan and finally completed my Masters in Fine Arts in 1999. After that, I received the National Scholarship from Ministry of Culture, Government of India through which I managed to use the studio services of Shantineketan. Even after completing that fellowship, the Shantineketan authorities asked me to join as a faculty in the foreign students course where I taught lithography to foreign students.

I have been painting since then with the occasional ups and downs. Sometimes I make good paintings while at times I make bad ones. Till 2004, I worked continuously and did many exhibitions across the country after which I joined Srimanta Shankardev Kalakshetra in 2005. I have been working here since then.

Ans: My art works are mostly based on my personal experiences after that horrifying incident. I also try to address socio-political issues, like secret killings, ethnic clashes between Bodos and Santhals, atrocities of army and insurgencies, etc. At times I go into abstract mode while mostly, I try to silently protest against the prevailing socio-political circumstances.

Ans: I live with my wife Anita Basumatary and our boy who is studying Physics in Kokrajhar. 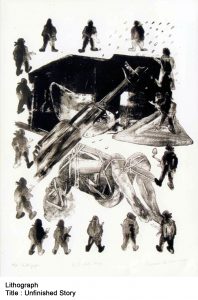