Celebrating Humanism through Art and Sculptures

Celebrating Humanism through Art and Sculptures

In Conversation with Eminent Artist and Sculptor Shiva Prasad Marar

An artist and sculpture who has constantly strived to portray the life of tea garden workers, Shiva Prasad Marar’s art works are marked by a high degree of sensibility towards nature and tea gardens and its workers. Hailing from a backward and marginalized Adivasi tea community of Biswanath Chariali district in Assam, his main oeuvre of sculptural compositions reflects the innocence of tea tribes, close kith and kin of tea garden people and above all, nature. The tea bush and the tea plant is one of the major motifs in all his paintings and sculptural works.

He has participated in numerous solo exhibitions across the country and the world. Among his notable awards, mention can be made of his felicitation by Assam Chief Minister on ‘Sramik Kalyan Divas-2017’ at Dibrugarh, Assam, the ‘Deoram Tasa Memorial Award’ by Jorhat District Sahity Sabha, Assam in 2017, the ‘North East Gold’ Award in Sculpture by Prafulla Dahanukar Art Foundation, in 2017, ‘2nd All India Digital Art Exhibition’ by All India Fine Arts & Crafts Society, New Delhi (2012), ‘74th Annual State Level Exhibition’ by All India Fine Arts and Crafts Society, New Delhi (2001-02), ‘1st Amit Barooah Award for Painting and Sculpture’ by Kamal Kumari Foundation (2013), amongst others.

As noted by noted writer and film critic Maulee Senapati, “Marar stands out in the contemporary art scene of Assam as an artist whose consistent portrayal of his own people and a melange of one’s own history even if in the form of nostalgia, indicates the modernism in his approach elaborated engrossingly with folk motifs. These creations are at once an artist’s commitment towards a social realm which underwent several tests of time as history evolved, as an oppressed community forced to face more misery, invariably treated by the “mainstream” psyche as “those from the periphery”. Since the times of the deceitful ways established during the colonial past, the “tea garden community of Assam” continues to be a marginalized lot within a larger social fabric despite renewed socio-political consciousness attained.” 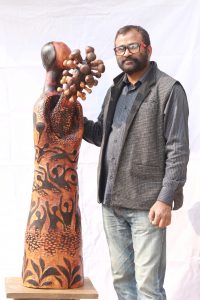 Senapati continues, “The refined maturity of any society is best echoed through music, art and literature influenced by distinct social milieus. The polemical contours of once uprooted people who had assimilated at ease with the social fabric of another land while retaining what has been essentially one’s own, finds significant presence in the poetry of Samir Tanti and in the art of Marar. Both, the poet’s and the artist’s works are allegorical, affirming the resonance of the human spirit, and resilience of natives still debarred from what is humane. This is reason enough why Marar’s drawings cannot be categorized as simply romantic despite what may distantly seem nostalgic romanticism.”

A distinguishing signature style of Marar’s paintings and drawings, according to Senapati, is the presence of the tea bush, tea leaves and the roots of the plant as a part of his visual idiom and scheme. As he says, “In most cases the figurative are symbolically derived out of the tea bush, signifying tea as central to the folk life and their fate and being. Reversely, it is also a strong statement on the irony about a freedom loving community’s bondage where, too, life and its myriad joys resonate abundantly. His figures invariably derive what elites may refer to as “primitive characters”, which is again a conscious attempt by the artist to look at his own people-- their past and their present-- not confined to a colonial perspective but through the prism of humanism in passionate celebration of roots preceding the bondage Marar’s own folks were confronted with, and conditioned to, since the colonial yore. It is this sense of humanism which Marar celebrates in his drawings where expressions of youthful love and yearning, motherhood, birth, the human bond, community ties, work, leisure and play derives significant unrestricted meanings.”

The mélange team recently caught up with the ace painter and sculptor know more about his journey in the world of art. Following are excerpts:

Ans: My father’s name is Parsuram and Pratima. My grandfather’s name is Sanou and his father Saideu brought him to Assam from Madhya Pradesh to work in the tea gardens sometime towards the later part of 1980s. At that time, tea gardens were functioning on the Girmitiya system under which labourers had to work for a minimum period of five years in the gardens after which they were free to work as per their choice. My great grandfather Saideu, along with many labourers from different castes and not only Marars, settled in Assam since then.

Ans: Our caste Marar originally belongs to undivided Madhya Pradesh State although some of our people have now settled in present day Chattisgarh. We were originally an agrarian community which worked in the cultivation of vegetables and plants. We were vegetarian by nature. Once the Britishers took over the Indian dominion, they took Marar people to different parts of their controlled territory, like Mauritius to cultivate sugarcane and to Assam to work in the tea gardens. Many people feel that the name of the community is also derived from the prime work of our community to rear the Marwa plant. I won’t go into much details but since people ask me about the origins about of our community, I am writing a book on the origins of our community which will be published very soon.

To cut a long story short, we came to Assam following a great famine in our place in the 1890’s. In Assam, there was a shortage of labourers to work in the tea gardens and the Britishers, since they were good in administration, brought us to Assam. My grandfather procured a lot of agriculture land, around 15 bighas, and settled accordingly.

I did my initial schooling in Borkura Prathakmik Vidyalay and later on enrolled in Chariali Academy and completed my HS from Chariali HS and MP School. After that, I studied B. Sc in Biswanath Chariali College and in 1994, I came to Guwahati to study art. I lost a few years and graduated in fine arts in 2002. After that, I went to Indira Kala Sangeet University, Khairagarh, Chhattisgarh to complete my Master of Fine Arts (Specialization in Sculpture) in 2004 after which I came back to Guwahati.

Ans: You are right. I was adept at painting but sculpture held a special position because it involved a bit of labour. Since I am laborious by nature, sculpture fascinated me because it felt like I was doing something laborious. While I continued working on composition, perspectives and colour play of painting, I continued working on both of them paralleley. While studying my masters, I did a lot of experimenting. I worked on paper pulp and mixed different metals to creat some unique elements. After coming back to Assam, I faced a lot of struggles in Biswanath Chariali and decided to come back and stay in Guwahati.

I stayed in the house near Judge Field and stayed there for 2 years. Got a chance to work in Central School for 2 years and did a lot of work on paper pulp and did a few exhibitions in Dhekiajuli. After people started discussing my work, I got more immersed in my work. I worked for a short while in Barpeta Fine Arts College and then worked in Arohan (Bhabendranath Children Welfare Trust). I had a memorable time in Arohan as I studied a lot of art works and got involved in various children activities. I then got married and since my financial responsibilities increased, I started doing commission art works for other painters. I joined DIPR as a staff artist later on.

4. Most of your paintings and sculptures are based on the tea plan and there is very strong femine component in your works. Can you please elaborate on the same?

6. You have represented the State and taken part in numerous exhibitions across the country. What do you feel are the issues that needs to be addressed in Assam and Northeast to encourage the new crop of artists?

And: I live with my wife Indira Suri Marar and two sons Adarsh Shiva Marar and Bibhash Shiva Marar. My wife is a housewife and is devoting her time in raising my children.