Cinema Other than that in Assamese language

The social dynamics of Assam has captured the imagination of many anthropologists, and can be understood through the study of its tribal culture. The tribes of Assam like Bodo, Karbi, Mishing, Rabha, Tiwa, Dimasa, Dewri, Koch-Rajbongshi, Moran, and many other tribal communities that inhibit in different parts of Assam have large varieties of traditions, cultures, and their way of life. Most of them have their own language, while Assamese is the principal one.

In the 1980s, the people of Assam had witnessed the rise of the genre through the films made in different ethnic languages. The people of Assam had taken cinema as a means to narrate their untold stories through their indigenous language. They have realized the importance of the powerful medium to address the question of existence and cultural identity. To understand the social dynamics of Assam, one must look not only at the Assamese language films but also films other than Assamese.

An alumnus of FTII Pune, Jwngdao Bodosa made the first ever Bodo feature film Alayaron (The Dawn) that was released on 13th March,1986 at Ganga Talkies, Kokrajhar. Bodosa’s Alayaron draws on the contemporary socio-economic issues that affected the Bodo people and its society. It won the National Award for Best Feature Film in the regional category. However, Amar Hazarika’s documentary Daina that was based on the witch-craft practice was released before Bodosa’s Alayaron. Jiuni Simang (Dreams of life) directed by Amar Hazarika and produced by Bodo Film Society, was the second Bodo film.

Bodosa’s second film Hagramayao Jinahari, (Rape in the Virgin Forest, 1996) became the first Bodo language film to be selected for the Indian Panorama (1996), and also won the Best Film in the environment category. The film has brilliantly portrayed how an innocent villager has fallen into the trap of some mischievous people. His other venture Gwdan Muga (The New Era, 2001), produced by Film Division too contributed immensely to the development of Bodo film.

Manju Borah’s Bodo film Dau Huduni Methai (Song of the Horned Owl) that won National Awards for Best Bodo Film in 2015 unfolds the complexity and conflicts prevailing in Bodoland, but at the same time, Borah has painted the exquisite beauty of the people, its customs and their way of life.

A graduate of the Konrad Wolf Institute, Germany, noted filmmaker Gautam Bora made the first Karbi language film Wosobipo (Cuckoo’s Call, 1989). Wosobipothat unfolds the lives of tribal farmers in Karbi Anglong and shows the threat that came in their lives due to socio-economic changes. The protagonist of the film Sarthe recollects his days with his grandfather and how he enjoyed the tranquility and serenity in the midst of the village river. During the springtime the chirping of the birds inspire the indigenous Karbi people to begin the cultivation of their land. It was the only Indian entry at the 41st International Film Festival in Berlin in 1991. Bora won the Indira Gandhi Award for the debutant director. Renowned musician Sher Choudhury won the Best Music Director Award for this film.

Dilip Doley and Narayan Seal’s film Panoi Jongki, recepient of National Award for Special Jury Mention in 2002, and based on the story Miri-Jiyori by Rajani Kanta Bordoloi, is the first Mishing language film. While Manju Borah’s Ko: Yad - A Silent Way, highlights the struggles of the ordinary Mishing people of Assam and their relationship with the river Brahmaputra by showcasing Pokkam’s life, starting from his youth to his old age. The protagonist of the film, Pokkam, a school dropout, makes a living by collecting firewood from the river Brahmaputra in a boat. The betrayal of his friends, his creditors, his children, and eventually the river Brahmaputra itself are poignantly portrayed in the film.

Suraj Dowarah’s Oraang (Strangers in the Mist, 2014) is the first film in the Rabha language. Set at the backdrop of the insurgency in Assam, Oraang talks of adolescence through a 14-year-old boy Rasong. The young boy Rasong is fated to work in a diesel pump as an operator to support his family. Since the pump site is situated deep inside the forest, he is psychologically disturbed and often is in quest of a route to escape from the dense forest. He takes an imaginary journey to the city and after spending a couple of days, he returns to his work place. The audience is confused here between the real and the unreal; it is ambivalent whether it was his real journey to the city or not. But the filmmaker, like a magician, establishes his point by the repeated use of digging scene that it was nothing but a figment of his imagination. When asked why the filmmaker has used so many wide angle shots than the close up, he says, “I used wide angle shots because I did not want to intrude into their lives.” 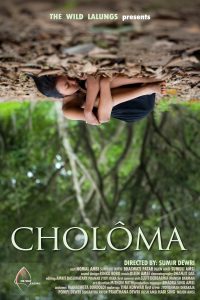 Based on true incidents, Sumir Dewri’s Choloma (Birth, 2018) is the first Tiwa language feature film, made under the banner of ‘The Wild Lalungs’. The film is based on two real stories – in the first story, the filmmaker narrates a story of Nomal, a forest villager, and his wife who is pregnant. But his wife and the child died in her womb as she could not be taken to the hospital. The life-world of a tribal village is beautifully depicted and how they are deprived of the medical facilities of life. But he decides to uplift his own village by establishing schools at his village, and communication and connectivity with towns. The second story talks of a family having a mentally challenged girl of thirteen years of age who was later raped. The second story shows how a mother, living in the midst of superstitious people, struggles to live.

A promising filmmaker Jaicheng Jai Dohutia’s Haanduk (The Hidden Corner, 2016) is also the first film in Moran language. It recounts how the rising of insurgency in Assam has changed the lives of many people. Filmed in actual location and in the midst of the people who witnessed the uprising of the insurgency, the film recounts how Hiramoni, mother of an untraced extremist Mukti, waits in vain and cherishes a hope that her son will return one day. Though she has performed the funeral of her son, yet she receives intimation that the death of her son cannot be confirmed by the outfit. Hence, it is a waiting for an uncertainty.

Digital films like Sat Puruser Vitha (2004) by Narayan Seal on the life struggle of the common people and Boby Sarma Baruah’s Sonar Baran Pakhi (2017) on the life and struggle of Assamese folk singer Pratima Pande Baruah were made in Koch-Rajbongshi language. While the Dimasa film The Untold Story of Blue Hills (1985) was made by filmmaker Prafulla Saikia.

We will miss the essence of Assamese cinema if we overlook these social dynamics which are reflected in the films made in different ethnic languages of Assam.

(Parthajit Baruah is a film scholar and author of the book ‘Face to Face: The Cinema of Adoor Gopalakrishnan’. He is presently doing research project at NFAI, Pune.