Over the last few years, the food and beverages industry of Guwahati has developed at a tremendous pace. With the increase in purchasing power and rise of the middle class, dining out has become more common among the people. To cater to this increasing demand of the people, a number of casual and fine dining restaurants have come up in the city.

From last Friday, a new buzzword has been going on around the casual dining circles about a new restaurant right in the heart of the city. You have guessed it right! We are talking about none other than Absolute Barbecues which is the latest entry of a big brand barbeque restaurant in the F&B industry of Guwahati. 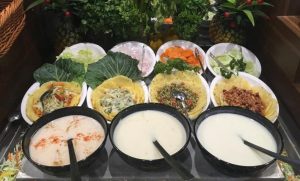 A leading and popular barbecue restaurant chain with its presence across the country, Absolute Barbecues (AB’s), opened its 29th restaurant at Mayur Heights, ABC Point, GS Road, Guwahati on Friday. With this, AB’s has made its first foray in eastern India. Absolute Barbecues is well known for it's unique ‘Wish Grill’ concept which provides its customers with a Do-It-Yourself (DIY) experience.

AB’s, which started in 2013, is already a well-known brand in the barbecue space with presence in 5 cities in India with multiple footprints. The company runs two restaurants in Dubai as well.

“It has always been our endeavour to reach out to our customers. Guwahati was in our radar for a long time as we were getting serious trade inquiries from our guests in Hyderabad, Bangalore and Pune. We are happy to have finally arrived in Guwahati and I am confident that with the exemplary food and services we would be the most sought-after barbecue restaurant in the city soon,” said Arup Chatterjee, Operations Head at Absolute Barbecues, last week.

Absolute Barbecues introduced the unique concept of ‘Wish Grill’ which caught the fancy of the customers with the new style of barbecuing clubbed with fun and frolic and thereby promoting the concept of Do-It-Yourself cuisine. 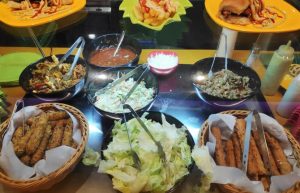 AB’s take the adventure of barbecuing and excitement to all new heights, where you, your choices, your palate will be celebrated like never before. AB’s is a place dedicated to you and your friend, family and your favourite people around.

With a large variety of exotic meats on the Wish Grill clubbed with Brazilian Churrasco, and an unending variety of starters followed by a cold stone creamery, AB’s is a place for everyone who seeks happiness and celebration with food and drinks.

The management of the restaurant chain opined, “Absolute Barbeques in Guwahati has a seating capacity of 130 guests which can be booked for any occasion and celebration. AB’s have a unique way of celebrating the birthdays and anniversaries and it always helped them to keep the momentum of the place high and vibrant always.”

They further said: As an inaugural offer, you can enjoy the barbecues delicacies at just Rs 449* till July 24. AB’s Guwahati can be reached over the phone at 7337336850 or through absolute-barbecue.com.”

Wasim Akram, one of the first customers of Absolute Barbecues India, Guwahati, shared, “I loved the ambience, The team were quite welcoming and helpful. Firstly, we were provided with a Welcome Drink followed by some Bbq fruits n veggie with the Non-Veg BBQ Grill. We tried Octopus and Shark which was my first time and it would be unfair for me to comment on the taste as it was something that I have never tasted before. (Rabbit & Emu meat is also available.) I also absolutely enjoyed the Hyderabadi Tangri and BBQ chicken. The masala was good for me as I like it Spicy. 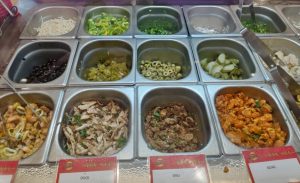 The Mutton Rogan Josh was delicious! The reception was great. The service was amazing and not to forget the entire team did exceptionally well considering the first-day pressure! With time everything will be sorted! Plus they have Chilli IceCream rolls! Like Never Before! Rs943 with GST for two people! Cheap and worth it. Go enjoy it till the offer lasts!”

Another foodie Somya Roy Choudhury, who was visibly impressed with the food quality of the restaurant, said, “We gave a visit to Absolute Barbecues. There was a wide variety of food than barbeque nation starting from Shark, Octopus, Quail, Rabbit, Duck, etc etc. Service was good just like the food quality. Didn't get any complaint just like someone got half-cooked food. Barbeque nation gets a good competition now. Hope it continues with the quality. 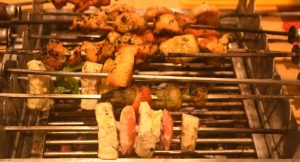 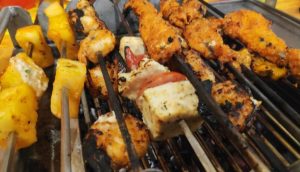 Absolute Barbecues is located on the 2nd Floor, Mayur Heights, ABC Point, GS Road, Guwahati, Assam. The restaurant, as part of its inaugural Offer, is serving buffet which starts at Rs 449! So all those foodies out there, don’t forget to give this new restaurant a try!