Although the F&B industry of Guwahati has developed at a rapid pace, Guwahatians had always felt the need for a quality restaurant which serves traditional as well as Chinese and other cuisines in a home-cooked manner and at affordable rates. While there are indeed a few restaurants serving ethnic cuisine, they either fall short on the authenticity of the dishes served or miss out on the greater clientele because of high rates of the food items. 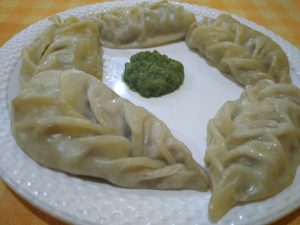 However, in recent times, a quaint little outlet in the Six Mile-Jayanagar area of the city is fast becoming the talk of the town for serving homely cooked Assamese dishes with a variety of pork and Chinese delicacies at very affordable rates. The restaurant also serves a decent amount of Chinese fares, including momos which are very juicy and succulent. We are talking about Anandamoi, which is located near the ISKCON Temple, opposite KTM Showroom, Jayanagar Road, Six Mile, Guwahati.

Launched in 2016, Anandamoi is the brainchild of Prashant Borua, a consultant by profession and a foodie by choice. Talking about the concept behind Anandamoi, Prashant says, “In 2016, one of my friends informed me of a vacant space which was available in the Six Mile-Joyanagar stretch. Although we did not have a clear cut idea of the business, we started Anandamoi in a bid to provide breakfast and Assamese thalis at very reasonable rates. Our main target audience was the office-goers and students from the nearby institutes.”

Over the course of time, however, Anandamoi has soon gathered a reputation of serving some of the best pork dishes in town. The restaurant has recently put up a stall in the Winter Carnival celebrations held at Lamb Road, Guwahati last week and foodies were left enthralled with the gamut of pork and chicken dishes which were served there.

Prashant says, “When we first started Anandamoi, we did not serve pork for the first six months. But very soon we realised that there is a huge market for pork dishes which are cooked in a homely fashion and which are served at affordable rates. So we started serving pork items in various avatars, like Pork with Mejenga Seeds, Pork with Lai Xaak, Pork with Mejenga Paat, Chilly Pork, etc.”. 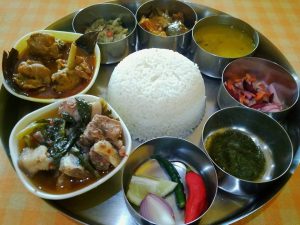 Besides the thalis and the other ethnic meals, the restaurant also serves juicy and tender momos along with other popular Chinese fares like noodles, rolls, etc. As the owner says, “Our momos are special in the sense that the fillings are full of meat. The meat is very juicy and tender and a visitor to our restaurant will vouch that one will not get such delectable momos in this part of the city.”

Some of the bestsellers in the eatery include the pork items and the momos. A few recent additions, which caught the fancy of the crowd in the winter carnival, were the Chicken Bhartas and Chicken Keemas. “Although this is my first entry in the F&B industry, I have realised that it is essential for the management to have a keen interest in food if any new outlet has to survive. According to a study, out of 100 per cent of most restaurants or eateries which are opened, almost 90% have to close down within the first year itself. We constantly try to experiment with our food and serve a variety of items so that our target audience remains satisfied with us,” says Prshant. The newly launched logo of the restaurant proudly states: “Sumptuous Meals at Affordable Prices”. 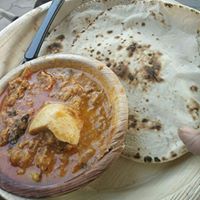 Giving her opinion about the food, a customer Deepankaa K Bora opined, “I was impressed with the fried momo of this place. It was yummy and very presentable. It was made available at a quite affordable price and the service was quick. The taste of the momos is also awesome.”

Another customer Randeep said, “The restaurant is simple but the taste and bites are awesome. The food is just like homecooked and wholesome food. The place is very hygienic and the food served is of good quality - not spicy yet great taste. This place is a must for all vegetarians as well as pork lovers!”

So next time you are in the Six Mile-Joyanagar area or you are sitting at home wishing to try some delectable homemade dishes, just pick up your phone and order from this cozy little restaurant!