When we landed at Kuala Lumpur airport in Malaysia, it was already night and as such, we were surprised to see a person waiting just outside the aircraft with our name plate. The person welcomed us to Malaysia very politely and apologised by saying that our luggage was not carried in the same aircraft. He politely told us that it would be delivered in the next flight from Singapore and told us to visit the Singapore airlines office at the airport. I was really shocked to hear the news as I had to present a paper in a conference the next morning. If my luggage did not reach by the next flight, there would be no dress left for me to wear and attend the conference! We went to the Singapore airlines office and did the formalities that they asked us to do. After getting a positive assurance from the office, we headed towards the city which is an hour’s journey from the airport.

As we entered the city, we noticed the beautifully lit skyscrapers and were really thrilled to see the famous Petronas twin tower. However I could not enjoy it to the fullest as the thought of my missing luggage was there at the back of my mind. We reached the city at 10:00 pm and by that time all the shops were closed and I could not buy any dress. I was just wondering how to deliver my talk wearing a jeans and a T-shirt! Time was passing by and I became impatient. However, at around 12:30 am, I got a call from the hotel reception saying that my luggage had been delivered by the airlines stuff. Over phone, I thanked the Singapore airlines staff profusely. 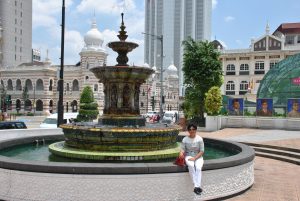 I was in Malaysia to present a technical paper in a symposium organised by the Society of Petroleum Engineers (SPE). The SPE is a prestigious globally recognised institution and it was a marvellous experience meeting so many technocrats under one single roof.

Malaysia is a Southeast Asian country occupying parts of the Malay Peninsula and the island of Borneo. It's known for its beautiful beaches, rainforests and mix of Malay, Chinese and Indian cultural influences. The capital, Kuala Lumpur, is home to colonial buildings, busy shopping districts such as Bukit Bintang and skyscrapers such as the iconic, 451m-tall Petronas Twin Towers.

Malaysia has its origins in the Malay kingdoms which, from the 18th century came under the British empire. Peninsular Malaysia was unified as the Malayan Union in 1946. Malaya was restructured as the Federation of Malaya in 1948 and achieved independence on 31 August 1957. Malaya united with North Borneo, Sarawak and Singapore on 16 September, 1963 to become Malaysia. In 1965, Singapore was expelled from the federation. The country is multi-ethnic and multi-cultural. About half the population is ethnically Malay with large minorities of Malaysian Chinese, Malaysian Indians and indigenous peoples. The constitution grants freedom of religion but recognises Islam as the established religion of the State. The country's official language is Bahasa Melayu, commonly known as the Malay language. English remains an active second language.

The name “Malaysia” is a combination of the word "Malay" and the Latin-Greek suffix “-sia”. The word “Malay” is derived from the Tamil words means “mountain”. It is a hilly place surrounded by mountains.

Being an Islamic nation, we noticed that all the ladies were wearing hijab and burkha everywhere – be it in conferences, markets, mall or the airport. To know the culture and tradition of the country, we approached the hotel reception and as per their suggestion we visited a Malay restaurant “Songket” and enjoyed an authentic Malay dinner with music and dance showing Malaysian indigenous culture. As suggested by the restaurant chef, we had Malay special Fish Satay (Bamboo Stick Skewered Barbequed Pieces of Fish), Nasilemakpandan (Rice with Coconut Milk and Pandan leaf), Masaklemak Ayam Nangka (Chicken Curry with Young Jackfruit) and Kukus Manga Muda (a whole fish cooked with mango pieces) in our dinner. 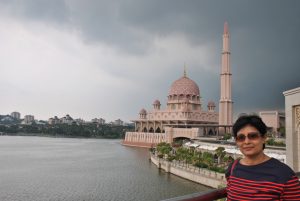 While visiting the various parts of Malaysia, we could feel that the country is a combination of mostly India and China. It was really nice to see “Little India”, where everything from India is available. The market is full of vegetables from India. We saw temples of Kali, South Indian temple and flower markets filled with beautiful garlands to offer to God and Goddess. We also visited a beautifully decorated colourful Chinese temple. The Chinatown is also very colourful. We had been to the National museum, President Palace and National mosque. It was really nice to see the area of Kuala Lumpur’s earliest Moorish-style buildings, the Sultan Abdul Samad building which is a distinguished city landmark that originally served as the secretariat for the colonial British administration.

A visit to a cave named Batu cave was really worth it. It is a cave in a big limestone hill and the cave is one of the most popular Tamil shrines outside India and is dedicated to Lord Murugan. A 42.7 metre high statue of Lord Murugan in golden colour is located in front of the cave. It is the tallest Lord Murugan statue in the world. Just beside the statue there are 272 steep steps to go inside the cave. Those steps are brilliantly painted in different range of colours. It was really tough to climb all those steep steps to visit the cave however I had made it. There are many Hindu idols placed in various corners of the cave and the main temple is dedicated to Lord Murugan, whom we know as Kartika, son of Shiva and Parvati. Looking at the Diyas kept near the temple, like others, I too lit a diya and offered the same to God Murugan.

Kuala Lumpur is famous for its huge malls and markets. Accordingly, we visited a few shopping malls and market area. Our hotel itself was situated in a big mall named Intermark mall. The other malls we visited were Berjaya time square, Suriya KLCC which is located in the Petronas tower, Pavilion mall, etc. Bukit Bintang is the shopping and entertainment district of Kuala Lumpur. The area has long been Kuala Lumpur's most prominent retail belt that is home to many landmark shopping centres, cafés, bars, night markets, as well as hawker-type eateries. This area is popular among tourists and locals, especially among the youths. There are few Indian restaurants offering mouth-watering food in this area and we didn't miss it.

We also visited Putrajaya, the new planned city where all the government offices are located. “Perdena Putra”, the Office of the Prime Minister, was really impressive with its huge structure. In front of the palace-like-office, there is a huge open space known as Putra square where most of the government functions take place. Near to it is the Putra mosque, the principal mosque of Putrajaya. A manmade lake named “Putra lake” adds beauty to this city. The mosque is located near to it. While entering the city one has to cross this beautiful lake and from the Putra bridge we could see the beautiful mosque. The new city is really worth a visit.

The hilly, beautifully landscaped cities of Malaysia are really attractive and its malls and other recreation centres are really capable of pulling tourists in this beautiful country. The tagline in their tourism banner is aptly chosen as “Malaysia – Truly Asia”. It really captures and defines the essence of the country's unique diversity. Nobody can deny the fact that this is the place where all the colours, flavours, sounds and sights of Asia come together. I really enjoyed experiencing this beautiful country.