‘Alita: Battle Angel’ is based on the first 2 volumes of the manga*(*a Japanese term for comics) Gunnm written by Yukito Kishiro also bringing in certain elements from the 3rd and 4th volumes. There is at least one character that was not in the manga but was conjured up in the preposterous anime adaptation of the Manga. The film relates the story of Alita (Rosa Salazar), a Cyborg who is discovered in a dilapidated condition by Dr. Ido (Waltz) in the Scrapyard under the floating utopia, Zalem. She is brought back to life by Dr. Ido but she has no memory of her past.

As luck would have it, Alita reacts to certain situations in manners that show signs of an extraordinary past as she packs off gruesome mercenaries using a fighting technique known as “Panzerkunst” that was thought to have been extinct for 300 years. Alita forms a romantic bond with Hugo (Keean Johnson) who tells her about his dreams of going to Zalem. Dr. Ido also has a secret to keep and Hugo is also not what meets the eye. With Alita’s extraordinary prowess exposed owing to her histrionics, a shady man by the name of Nova sends in all at his disposal to kill off Alita. Why he wants her dead? Who is Alita and what is her past? What is Zalem? Who is Nova? All these questions and a lot more are answered throughout the course of this film.

The visuals and the action of the film are absolutely spellbinding. The manner in which the character of Alita is rendered is awe inspiring. I have never seen such depth, richness, and texture in a fully animated character before. If it was not for her unusually large eyes, it would be impossible to tell that she was not for real. Alita was not the only one. 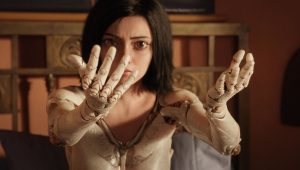 The rendering of some of the villains, all of whom are Cyborgs, was insanely cool. I just loved what they did with the character of Zapan played by Ed Skrein. He felt even more real than Alita. I tried to find a crease in the sticking skin of a face of his on the metallic endoskeleton but I couldn’t. The same can be said about the character Grewishka played by Jackie Earle Haley who is practically unrecognizable. In the manga, the character goes in a different path but here they did a good job with the mashup of the character’s history with Nova and his own past.

The Motorball Sports sequence that forms the basis of volumes 3 and 4 of the manga is a mere highlight here but is a rip-roaring affair. It may be limited but the kind of moves that Alita is shown making in addition to the physicality of the action on display is bound to feel like a punch to the solar plexus for many. The brawl in the Bar is wonderful as well but for me, the best action sequence was the one that happens between Alita and Grewishka in the innards of the Iron City* (* The name of the Scrapyard city below Zalem where the story unfolds). There was a lot of character to this action sequence and it ends in a way that no one can prepare you for.

All that is left to speak about is the ensuing drama and story that takes us from one action sequence to the other. One way of approaching the story would have been to go panel for panel from the Manga and it worked for director Robert Rodriguez in his Sin City adaptation. However, here James Cameron, the writer and producer of the film tries to keep parity with the Manga but mashes up the characters and story and tries to bring his own take on the whole matter. That didn’t quite work for me as it invariably took away a lot of the emotional punch that the actual story had to offer. It also made some of the actions of the characters feel awkward and unmerited.

I felt that ‘Alita: Battle Angel’ would be the manga adaptation that would for the first time transcend the border between the Japanese culture and the American rendering of it. Unfortunately, that isn’t the case here. Rodriguez/Cameron change characters and settings partially that felt very halfhearted in a lot of situation. Also, the manner in which some of the characters are in the manga are not presented in a similar way here which does affect the tone and feel of these characters. I would have said that this film would work better if someone hadn’t read the manga but that is also not the case as it doesn’t ease you into its strange world but sets up everything in a jiffy. So I could relate to a lot of things because I had read the manga and had some firsthand knowledge of it.

Apart from Rosa Salazar who is great and Christoph Waltz who could practically stand and repeat a word and would still be awesome, none of the other actors has anything substantial to do. Mahershala Ali is wasted in a role that could have been done by anyone. Jennifer Connelly was unnecessary. Ed Skrein felt like he would be great but just didn’t get enough screen time. Keean Johnson was plain irritating and there was no chemistry between him and Rosa Salazar which really hit the believability factor of the plot point on which the whole film anchored. This is really unfortunate as the manga is as much about the action as it is about the characters and their interim drama. Even smaller characters have deep-rooted ethos and well-defined arc. Whose idea it was to show Koyomi as a grown up?

Here is a film that would have been great had it just stuck to the mood, feel and story of the source material. All they needed to do was Americanize it and it would have worked. Unfortunately, Cameron and Rodriguez end up tattered between whether to do a wholehearted Japanese adaptation or use the concept and make their own version of the story. The end result is a film that may be spectacular to look at but is shallow and undercooked in its treatment of a rich and highly layered source material.