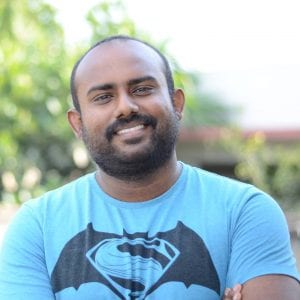 “An Unmissable Rollercoaster Ride of a Film with Incessant Twists, Thrills and Black Comedy”

Akash (AyushmannKhurrana) is a blind pianist who is trying to complete a tune that he believes ismissing a proper ending. Sofia (Radhika Apte) literally bumps into him and offers him a job as a pianist in his father’s restaurant. The two have a good chemistry going between them andAkash starts earningwell at the restaurant making his dream of breaking out into the Europe music scene a possibility. However, a chance meeting with a movie star of yesteryears and his feisty wife Simi (Tabu) changes Akash’s life forever. 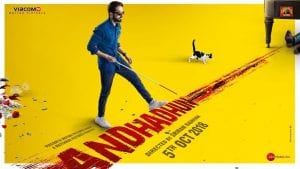 ‘Andhadhun’ gripped me from the word go and apart from a minor portion where the story seemed to be going a bit too far to take it seriously, it maintained the same grip throughout. No one in the film apart from maybe Sofie is what they appear to be. Akash uses his handicap as a means to concentrate on his music and also as a means of doing a social experiment of his own. Simi, the underage wife of an aging self-obsessed star, is also not what she seems like and you can make that out from the manner in which the director chooses to shoot her. You know from the get-go that something terrible is brewing underneath but the shit hits the fan only when you least expect it to.

The screenplay has so many twists and there is so much happening that by the time the end credits rolled, I was exasperated. It wouldn’t be wrong to say that the film has a twist in almost every sequence post the event on which the story harbors itself. The good news is that none of those twists are like what we are used to in Bollywood films. They are not Race-twist. I couldn’t help but draw parallels with films like “Lock Stock and Two Smoking Barrels” and “Snatch” (both exceptionally well directed by Guy Ritchie). The speed, the editing, the screenplay and the feel of ‘Andhadhun’ is in close proximity to these films and that I believe is one of the best compliments that I can give this film.

‘Andhadhun’ is an extremely funny film too. I couldn’t hold myself back from laughing out loud incountless scenes. I could blabber about the comic scenes of this film for the whole day but for the sake of not being a spoiler, I choose to only say this much that ‘Andhadhun’ is easily one of the funniest films of the year and chances are it will have you in splits for all the right reasons throughout its runtime.

I am hearing rumors that this film is a remake of “In Darkness” (2018, Anthony Byrne) but I haven’t seen that film yet and going by what I saw in the trailer of “In Darkness”, I couldn’t see much similarities with ‘Andhadhun’ apart from the fact that the protagonists of both the films are blind pianists. Even If it is, I still have to agree that ‘Andhadhun’ has been remade in such a way that it now has a beating Indian heart and has been immersed into our socio-economic landscape to the extent that it’s nearly unrecognizable from its original. Wasn’t that the case with “The Departed”? The film that won a truck load of Oscars?

The title itself is a clear indication of what the people in this film do (Andhadhund in Hindi meaning random). Every character is plain out of his or her mind and does stuff that is hard to fathom. AyushmannKhurrana is terrific in a role that may just be the best of his career. He beautifully slips inside the shoes of a blind man knowing full well when to speed up and when to categorically slow down his movements. What he witnesses and what he can’t express in front of others is expressed via facial twitches uneasy movements, which also happen to be one of the funniest and also most endearing things about his character. He works like a pro with the piano and you never doubt him to be anything else other than what he tells you he is.

Tabu is hypnotic. Her looks, her charm, her hair, and her mannerisms cast a spell on me when I watched this film. The trailers put some interesting questions about her character in our mind and the film answers those questions within the first hour of its runtime. It’s only after that the film actually begins. Anil Dhawan plays Tabu’s self-obsessed husband and the starting point of all troubles. He is delightful in a role that not only brings with it a lot of euphoria but also suits him perfectly. Radhika Apte has what can be called an extended cameo but she does her part with gusto. I cannot speak a word about ManavVij’s character without giving out spoilers and hence all I would say is that he is wonderful in a restrained and calculated act.

Raghavan has made some of the finest thrillers of Indian cinema (Ek Hasina Thi, Johnny Gaddar, and Agent Vinod) but with ‘Andhadhun’ he has entered a whole new territory and made a film that might not have been made before in India. It’s not just the way that he employs to tell a thrilling story by revealing everything that is there to know about the crime and yet maintaining a vice-like grip on the audience. It’s also about the number of twists and turns and drama that he is able to extract even after the audience is fully aware of the “who”, “why”, “when” and “how”.

‘Andhadhun’ is a sparkling thriller that deserves multiple views to sink in all that it has to offer. It is loaded with Easter eggs, hidden meaning and in your face references. It is the kind of film that will stay with you long after the credits roll. Even after it has ended and you have got all your questions answered, you will still have some doubt about the whole story that you just heard from the protagonist. That is the biggest plus of the film. It never ceases to amuse and surprise and that I believe will also make this film a cult classic in years to come. If it doesn’t become one, it will be a pity.