For all those of you who don’t know about the Ku Klux Klan, it is a secret organization of white Protestant men in the United States which promotes violence against black people, Jews, and other minorities. There is one undeniable characteristic of it. It is made up of whites – White bigots who would kill for color and creed to be precise. What if I told you that an African American was initiated into the Klan and got a membership card signed by their Grand Master? You will be shocked right? You would almost not believe me. That’s exactly what BlacKkKlansman is all about.

It is the incredible true story of Ron Stallworth (John David Washington), a police officer in the Colorado Spring police department who, through his sharp intellect and smooth social engineering skills penetrates the Klan. His colleague Detective Flip Zimmerman (Adam Driver) plays him in the body for the Klan and the two help foil a major attack planned by the Klan on an African-American congregation.

As crazy as it may sound, BlacKkKlansman is a true story and that’s what made it that much more appealing to me. Even if that was not the case and this was in fact fiction, this would still be an engrossing affair from start to finish. This is one of the better-written films of the year and it wouldn’t be wrong if I say that the writers didn’t write a single unnecessary line of dialogue or a single unnecessary piece of sequence. The film grabs your attention from the get-go and culminates in a truly breathtaking climax involving almost all the major characters. This is a film about a serious issue and it never dilutes its premise and background. 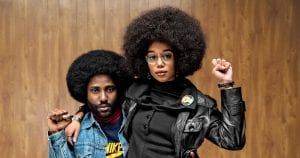 In spite of that, BlacKkKlansman is easily one of the funniest films of the year. A big chunk of the comedy comes from the stereotypes associated with the African-Americans and how utterly out of place it feels to a truly educated African-American. If that was not enough, the sheer audacity of the two individuals, one of whom is, by the way, Jewish (the Klan hates the Jews as much as the Blacks) invariably leads to some situational comedy or the other. There are several situations when the two nearly get caught but they are saved time and again by nothing more than their good luck and some curt action on their parts.

The film never forgets to bring us closer to the personal life of the protagonist Ron Stallworth as he is shown torn between his duty and his love for a pretty lady who is a part of a Black Emancipation Movement and sort of the other side of the spectrum. These sequences help us to identify with the man and grow a deeper bond with the character. I just loved the way the climax of the film unfolds. We see two meetings side by side. In one, The Black Emancipation Movement hears from an aging man who has seen firsthand the brutality of a white totalitarian regime. On the other, we see the Ku Klux Klan’s initiation ceremony complete with a show of D.W. Griffith’s Birth of a Nation. We see the effect of that film on both the stories and the amount of thoughtfulness that Spike Lee has shown in pointing out that minor detail was refreshingly thought-provoking. #BlacKkKlansman 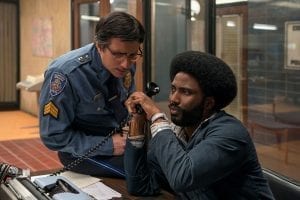 John David Washington is brilliant as Ron Stallworth. His voice is so like his father that at many junctures, I could close my eyes and picture Denzel Washington playing Ron on the basis of what I was hearing. He is believable. He is likable and above all, he has impeccable comic timing. He was also able to display his apprehensions about the black experience and at the same time be level-headed enough to do the right thing. Adam Driver is sublime. He plays a man who plays a character that he is not.

It’s like a performance within a performance and he does it exceptionally well. I loved the sequences he shared with Washington. There are a few scenes that he shares with a Klan member called Felix (Jasper Pääkkönen) and they are outrageous in their own way. Just look out for the performance of the man and you will know why I singled him out for so much praise. 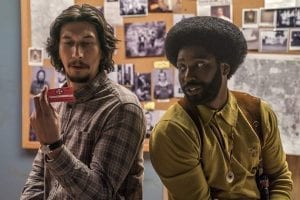 Laura Harrier has a nice little cameo that assumes greater importance as the film (BlacKkKlansman) progresses. She not only becomes the love interest of Ron but also a huge question mark on his action, his thought process and his belief on if at all he was on the right side.

It wouldn’t be wrong to say that the climax of the film hinges partially on her character and her well-being. Topher Grace as David Duke is terrific. Just look out for his telephonic conversations with Washington. They are easily some of the funniest bits of the film. He maintains an interesting demeanor all through his act.

One of my nitpicky issues with the film was with its editing. At certain places, the transformations felt very jerky which shouldn’t have been the case with a film that is otherwise so well made. Another minor issue for me was the fact that the Klan didn’t feel as threatening as I would have liked them to. It would have been better if they were a tad bit more intimidating.

Having said all that, BlacKkKlansman is still a refreshingly original and absorbing film that will be loved by one and all. I laughed my guts out during the screening just as much as I had my heart in my mouth during the climatic situations. It will cater to one and all and the fact that it is squeaky clean in its content will make it accessible to a larger audience. This one is definitely a must watch.