‘Kangana is the only positive in this over-drawn, loud, bloated and uninspiring epic’

Indian kids like me have grown up with the story of The Queen of Jhansi. We got goosebumps when we heard it for the first time from our mothers and grandmothers. Her story was not a fairytale that was conjured to put us to sleep. It was, on the contrary, as much a tale of the Queen’s valor and courage as it was of her audacity and ability to thwart the steamrolling British machinery and at the same time be the face of change for the women in the predominantly patriarchal society. Her story has inspired millions and has also rubbed on its charisma to other fictional stories that have over the years captured the imagination of viewers and listeners alike. Unfortunately, Manikarnika: The Queen of Jhansi is unable to cash in on the crux of what made “The Queen of Jhansi” such an iconic and Godly figure. There isn’t anything in the film that will get your heart pumping and this lack of inspiration is what mars a film that could have been great. Manikarnika is re-christened Laxmi (Kangana Ranaut) and married to Gangadhar Rao (Jisshu Sengupta), the King of Jhansi. The British have a keen interest in taking over the reign of Jhansi as it is still without an heir. Laxmi soon bears a boy but the child dies just as quickly. The king dies soon after and Jhansi is without a ruler. The British now decide to take over the kingdom and they do. The queen is banished and starts living with the masses. It is at this time that the infamous Sepoy Mutiny breaks out and the Queen of Jhansi gets an opportunity to not only take back her kingdom but also teach the British a befitting lesson.

The first half of this film could have been just avoided if the voiceover of Amitabh Bachchan was extended to include just three lines more and made it clear that Manikarnika was married to Gangadhar Rao so that she could bear him a child. Also, she comes to Jhansi and starts connecting with the masses. That would have sufficed. Instead what we get is a flurry of sequences with songs and dances peppered in between that stretches a minuscule plot point and drags it for 1 hour and 10 minutes. This portion of the film bored and irritated me to the extent that I felt like walking out. However, I was hopeful of a better second half and convinced myself to stay put.

The second half does get better as this is where Kangana gets to show her intensity as the queen who has lost everything except her pride. Taking a step away from a queen who was gyrating with commoner for no rhyme or reason to apparent item numbers, Kangana delivers her act’s strongest portions. I just loved her in the Battle of Jhansi where she has to defend herself and her son against a marauding British attack. I loved her swordplay here as this was the only time when there seemed to be some genuine intensity and physicality in her combat. CGI blood is splattered and every look at the queen’s face makes you believe that she is actually having a hard time defending herself and her son which in turns makes this sequence affecting. 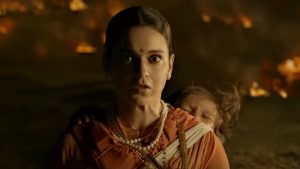 I also loved the scene where Kangana has to vacate her fort and go and live with the masses. As she walks out of her fort and is followed by the people, one can actually feel her angst. She then goes ahead and liberates Gwalior which is also a worthy sequence. However, all that is marred terribly by the climax which even a kid would be able decipher as one shot in front of a green screen with some of the tackiest wireworks that I have seen in years. I really don’t know how long more it would take Bollywood to understand how wirework works and the physics of it. When will they realize that they can’t shun the rules of gravity and need to use it as a means to add credibility to the action? Also, action choreography needs the same amount of finesse as dance choreography and anything less would mean doom.

Every supporting cast member in the film does a horrific job. A film like this that doesn’t boast of being historically accurate could have easily used better villains. There are two anchoring points in the name of antagonists and they are both so generic and cliché that they wouldn’t even leave a mark in a Colors TV production. If that’s not all, seasoned actors like Jisshu, Danny, Mohammed Zeeshan Ayyub, Atul Kulkarni, Kulbhushan Kharbanda and Suresh Oberoi unbearably ham in roles that could have been done by any Tom, Dick or Harry. Apart from the ones mentioned above the rest of the supporting cast work against the film in their own ways. A film like this needed better CGI. As the film progresses the CGI keeps getting worse and reaches its crescendo in the climactic battle scene making the queen’s end more hilarious than heartbreaking. Whosever idea it was to shape the fire in which the queen perishes as Om was a terrible call. 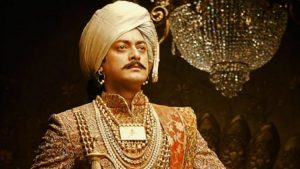 Kangana Ranaut’s inspired act will not be able to overshadow all the gaping holes in the plot, execution, and performances. This was a film that should not have been more than 2 hours long and should have concentrated on the last few years of the Queen’s life after the death of her husband and child. That way this would have been a political thriller which would have been the best approach to the story making the tale gripping. The CGI should have been done away with and all the action should have been in camera and Kangana needed to train for the combat to get the desired physicality. That would have not only added believability to the character but would have made the action sequences thrilling and haunting. All songs should also have been done away. It also needed to cut short on unnecessary side actors and that would have further fine tuned the screenplay. The film, also needed better relate-ably hateable adversaries to give the queen something to gloriously beat upon.

I really wanted this film to be good. But ever since the trailer came out, I knew at the back of my mind that this film would turn out short of its mark and I am heartbroken that it did. Kangana had her heart in the right place and it must be added that she looks as glorious as the picturesque sets and locations that she stands in but that’s about it. This film is neither inspiring nor haunting and that is just unacceptable when it is the tale of “The Queen of Jhansi”.