In Mahabharata, “Akshaya Patra” was an inexhaustible divine vessel that could feed all the hungry in the world. The boon-vessel was given by Lord Surya to Yuddhistira, the eldest of the Pandavas, when they were in exile. With its divine power, their wife Draupadi could feed all and sundry who visited them, including themselves, everyday. Once by a machination of eternal conspirator Shakuni, the ever-angry sage Durvasha was sent to the the Pandavas with his huge entourage after the kitchen was closed for the day and the Akshaya Patra was empty.

The hapless Pandavas had to welcome the guests but got worried when the sage demanded food for all and went for a pre-meal bath in the nearby river. Draupadi started crying as there was nothing left to feed the large number of guests and started praying. Lord Krishna appeared in the scene but he too asked for food from his adopted sister.

Draupadi showed him the empty vessel but Lord Krishna could find a single grain in it and ate with full satisfaction. With that divine act all empty stomachs of the world got filled including those of the sage and his entourage. After the bath sage Durvasha was embarrassed as their stomachs were full up to the brink with no hunger and hurriedly left the place without facing the Pandavas. The story probably is a metaphor that with a single grain of seed, food can be grown and multiplied. 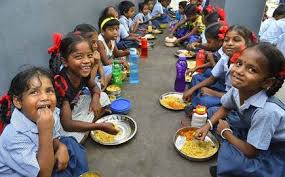 The Akshaya Patra Foundation, TAPF in short, aptly chose the name for their noble venture to eliminate classroom hunger in partnership with the Government of India in a Private Public Partnership (PPP) model. Established in Bengaluru by Madhu Pandit Dasa under the aegis of ISCON in a very modest way in 2001 with the motto of ‘unlimited food for education’, TAPF has grown into a huge non-profit organization today in a matter of just eighteen years. A recent visit to the Akshaya Patra’s Guwahati establishment from Guwahati Management Association was an enlightening and enriching experience.

Situated at Amingaon, at a distance of only about fifteen KM from the city centre, right on NH 31 across river Brahmaputra, the visit was an eye opener. Established in February 2010, presently being operated in a rented site, it is serving free mid-day meals at some 613 Government schools to 35,000 plus children, every working day. Insulated food containers with hot food in specified temperature is delivered in time by 21 specially designed vans. Specialized and semi-mechanized operations in the huge spic-n-span hygienic kitchen, employing some 160 local people, needs to be seen to be believed. They will shift to their own accommodation site soon. Similar establishments at Jorhat and Itanagar are also on the anvil.

With the aim to improve primary education and counter classroom hunger, the Government of India mandated and launched two very significant and ambitious prorammes in early 2000: Sarva Shiksha Abhiyan (SSA) and Mid-Day Meal Scheme ((MDMS). The flagship programme of SSA endeavors to achieve universalization of Elementary education, by making available free and compulsory education to all the children of the country in the age group of 6 to 14 years.

But soon the think tank realized that in the prevailing socio-economic scenario in the country, providing free education was just not enough to attract the children of the lower strata of the society. Hence, to further SSA initiatives, the free Mid-Day Meal Scheme in all the government run schools followed in 2003. As on date, around 11 crore children across some 12 lakh schools are already covered.

The MDMS’s expressed objectives are: Eliminate classroom hunger, Increasing school enrolment, Increasing school attendance, Improving socialization among children of all caste, creed and religion, Addressing malnutrition and Women empowerment. Over the years significantly visible improvements in increased enrolments and steady attendance in classroom have been observed. As the children from all caste and creed eat together, the country’s perennial social evil of caste barriers are expected to evaporate to a great extent in the next generations. As for women empowerment, a lot of women self-help groups are involved and mostly women are employed in the scheme. After all, care and share is the essence of a woman!

Akshay Patra, which was already in operation by then, joined hands with the governments in a ‘no-profit no-loss’ mode. Initially, TAPF suffered from severe resource crunches. But two pioneer philanthropists, Mr Mohandas Pai and Mr Abhay Jain joined the movement that gave it a great fillip. Mr Pai donated the first delivery van and Mr Jain roped in many donors. Today, TAPF implements MDMS in 40 locations of 12 Indian States feeding some 19 lakh children every day through their 38 centralized and 2 decentralized kitchens employing 6000 odd people. 60 more locations are under implementation.

It also has feeding programmes for: Anganwadi, Expecting mothers, Economically backwards, Runaway children, Old-age homes, Homeless people and Disaster relief. In addition, TAPF works towards many other social initiatives. 12 of its centralized kitchens are already ISO 22000:2005 certified and rest are in the process of obtaining. The foundation follows a vegetarian philosophy, does not provide eggs but alternatives such as milk and banana are added to the menu. A delicious lunch prepared in the kitchen and as served in the schools was served to us after the visit.

Around 51% of their cost is met by government grants and subsidies, rest 49% by donations. Following very transparent accounting procedures, 82% of it goes as programme cost, 14% management cost and 4% for fund raising and communication. A small donation of Rs 1100 can serve a wholesome mid-day meal for one child for one full academic year. Most of us can afford to fulfill at least this bit of our social obligation, actually we should. I did. May the ‘Akshaya Patra’ never get exhausted!!