“The brand and its products have proven able to unlock the untapped potential for men’s footfall and conversion within the Beauty category. That is, of course, a key driver for securing an overall category growth.”

Skullcandy announced the launch of its first truly wireless earbuds today, called the Skullcandy Push. The earbuds feature a large button on the side, which can be used to answer calls, switch audio tracks, and control the volume, in addition to activating your phone’s voice assistant to perform tasks like sending a message or setting reminders by triple-tapping that button. 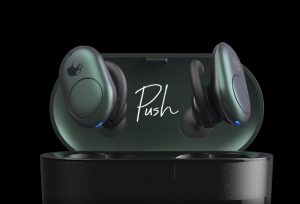 The earbuds only come in one color, “Psychotropic Teal,” but they’re a vast improvement over the murky gray first seen in the company’s leaked FCC filing in November. The funky looking gel ear hook promises the earbuds won’t fall out, either.

Unfortunately, if you were looking for a pair of workout earbuds, you’ll have to look somewhere else. Skullcandy doesn’t recommend exercising with the Push, as they’re not sweat or water-resistant.

Skullcandy says the Push wireless earbuds will be sold exclusively at Target for $129.99 until the end of 2018, and will be available at select retailers starting January 15. If you happen to lose an earbud, Skullcandy will also offer a replacement earbud or charging case at a reduced price of $49 under its “Fearless Use Promise”. It’s a slightly better deal than what Apple offers, which is $69 for a replacement AirPod or charging case.