Fancy bazaar is Guwahati’s version of a Chandni Chowk. The ubiquitous shops, roadside vendors, the crowded footpaths - it is a chaos that we simply love.When you have nothing to do or nowhere special to go, just head to the heart of the city… Faansi Bozaar. The cobbled streets of the ancient market has just the right energy to lift up your spirits. Be it the bargain shops, the flea markets or the roadside eateries each has an appeal of its own. Despite the overdose of swanky malls and branded outlets scattered around the city one cannot just ignore the allure of Fancy market. You name it and you can get it in this market of plenty.

You need to walk along the pavement but do watch your step as uneven footpaths, manholes, stray dogs lazing around might just trip you over, be prepared to dodge the beggars following you around begging for a handful of coins, little children in tatters carrying small babies who are always fast asleep is a very common but disturbing sight in the market. A question that always pops in my mind when I notice them is why are they always asleep, where are the parents....why the parents have no qualms procreating when they are obviously aware that they do not have means to look after them. NGOs claim that they are involved in rehabilitating street children and child beggars yet the beggars in Fancy Bazaar never seem to diminish. Instead of spending tons of money on organising festivals

like the Namami Brahmaputra, can’t the government open community halls for beggars or at least provide crèches for beggar babies lying around like trash?Babies do not belong in the streets and pavements; they need a secure environment to grow up. But is anybody listening?

However, after the initial shock of absorbing the plight of the unfortunate lot of beggars, one is taken in by the food street which is lined by food stalls in areas such as the pavement near the ShaniMandir. Delectable items like the PavBhaaji, veg chow,cheese momos, rolls, paanipuris.... and numerous other mouth-watering dishes are offered in those small kiosks for one to dig in. But yeah, you need to say goodbye to hygiene andavoid scrutinising the vendors and their MO if you really want to enjoy the food there. People swarm to those stalls as bees to honey, unable to resist the gastronomic temptation! 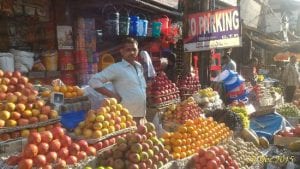 Fancy is also home to the city’s biggest fruit market, the most exotic and freshest fruits make way into this market. You need to protect your feet from the uneven street,dotted with potholes and puddles during the rainy season. So walking shoes are the best options when venturing into the fruit market and also brace yourself for the stink thatwould attack your nostrils as soon as you are at its threshold.

Fancy is a shopping heaven for the people of our city where you can find clothes ranging from a hundred to a couple of thousands in the same periphery. The flea markets put expensive showrooms to shame in terms of variety of stock and you can easily pass off a fake brand without raising eyebrows.

I for one am a fan of Faansi Bozar...just walking along its uneven path and taking in the myriad sights and sounds is pure joy. I love the familiarity of the place and I love the way the vendors call out to me on the footpaths...I have seen them at the same spot year after year. “Baido, have a look at the hankies...” quips a man from whom I had purchased something many years ago. He always makes it a point to call out to me from the corner area of the pavement opposite Khubchands, and he is always selling different items whenever I walk past him. So many summers went by, time takes a toll on everybody but this boy whom I saw growing into a middle-aged man over the years seemed to have been arrested by time. Except from the lines of a tough life marked on his face, nothing changed in him. I have been observing him since my college days and it seems both of us have been rooted in the same place. I have a soft spot for him though I am completely unaware of the trials and tribulations he must have undergone in all those years but he must have overcome all and succeeded in taking his place in the same spot of the same market, day in and day out. He is a hero of his own life, in face every single person isan unsung hero of sorts to eke out a living for oneself and one’s family, facing the vagaries of life and at the same time having the courage to smile and go about life without giving up. I admire such people and salute their spirit.

And then there are those special shops and outlets which have been there for ages. I remember frequenting Robin cabin a small nondescript cafe tucked into a corner of the market, which was one of the pioneers of its kind during the seventies and eighties. I used to be a regular visitor there with my parents when I was a child and loved to have its speciality, the Bombay Bonda with a bottle of Coca cola. Tough I have stopped visiting it but I have seen it still going strong as it caters to a different set of customers every day. I grew up and changed my preferences and perspective but it hasmaintained and preserved its uniqueness without bothering to acknowledge the spirit ofchange.

Fancy is not just a market that you visit to buy stuff of daily needs it is also theunpaid psychiatrist that lifts up your dampened spirit when life threatens to bog you down, offering you an instant mood enhancer to stare life in the eye!