In Jihad against Population Explosion

In Conversation with Eminent Surgeon and Activist Dr. Illias Ali who has been named for this year’s Padma Shri Award

A revered surgeon and philanthropist from Assam, Dr. Illias Ali is a name which hardly needs an introduction in Assam and Northeast India. With decades-long experience in the field of improvement of Assam’s Public Health sector, especially towards curbing the rapid explosion of population in Assam as well as other parts of India, Dr. Illias Ali has single-handedly managed to create unprecedented levels of awareness to the menace of ever-rising growth of human populations to create better standards of living, social development and understanding. His efforts in this direction have been duly recognised by the government as he has been selected for the Padma Shri Award – the fourth highest Award of the Republic of India – this year.

Born on August 9, 1955 in the remote Ghopeli village of Darrang district, Dr Ali completed his MBBS and Masters Degree in Surgery from Gauhati Medical College in 1982 and 1987 respectively. His untiring efforts to popularise family planning as a whole in every nook and corner of Assam has markedly increased the female and male participation in birth control programme and this has lead to a decrease of Total Fertility Rate (TFR) from 2.6 in 2009 to 2.2 in 2015-16 [as per the Assam, National Health Survey (NFHS-4), India]. 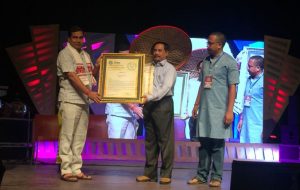 A man driven by a mission to drive the concept of family planning in remote areas of Assam, Dr. Ali has travelled to the nooks and crannies of the State – often in inhospitable terrains and areas marked by deplorable law and order situations, mostly on foot and at times on bullock carts and country boats, in order to achieve his set goals for creating awareness about family planning and population control. His works, over the past few decades, has paved the way for opening of many new horizons in the field of sustainable livelihood, holistic development and prevention of environmental degradation.

The most significant contribution of Prof. Ali is his popularization of the concept of family planning – which is thought to be alien and against the basic tenets of Islam – amongst the Muslims, primarily the immigrants, by using the Holy Quran and the Hadith as his preaching module. His earnest effort to counter polygamy, a curse which was and is still rampant amongst this group of immigrant Muslims in Assam, is commendable to say the least.

Another laudable contribution of Prof Ali towards the population control programme is the popularisation of NSV (No Scalpel Vasectomy), a modern and novel procedure of male sterilization (vasectomy) among the people, irrespective of cast and religion, thereby overcoming the decades-long myth and taboos prevalent in the society. A recipient of numerous accolades from various bodies of Assam and other parts of India for his contributions in the field of population control programme, Dr. Ali’s work has drawn the attention of international media houses like BBC, New York Times, Associated Press (AP), The Washington Times, Al Jazeera, Forbes and Yahoo News, to mention a few.

Dr. Ali’s contributions towards the popularisation of NSV (No Scalpel Vasectomy) can be gauged from the fact that in 2007-2008, only 19 males had adopted the NSV procedure in Assam but after his involvement in the family planning mission, there has been a considerable increase of male participation. From January 2009 to March 31, 2017, more than 55,000 males have adopted the NSV procedure.

Prof Ali has also been instrumental in the training of thousands of ASHA workers, ANM, GNM and other health personals in the field of family planning. More than 120 Medical Officers (MO)s of Assam has received training in NSV procedure under his able leadership. Not just Assam, he was also instrumental in initiating doctor’s training and NSV programmes in the adjoining State of Meghalaya.

Prof Ali had earlier served the State and the nation in various capacities, viz. Professor of Surgery (Emergency), founder Head of Department of Emergency Medicine, Gauhati Medical College, Guwahati and State Trainer-cum-State Nodal Officer of NSV and Senior Consultant of Family Planning, NHM, Assam. He was also a member of the Committee for Population Policy of Assam, a national expert of NSV, Ministry of Health and Family Welfare, Govt of India, and Assessor of Medical Council of India, Govt of India. Under the leadership of Prof. Ali, the concept of ‘Emergency Medicine’, a very new department which is yet to start in several States of India, has developed into a full-fledged facility at Gauhati Medical College, Guwahati, Assam.

Besides his work in spreading awareness and curbing population explosion, Prof Ali’s contribution in the overall development of the surgical faculty in Assam and Northeast India is also commendable. He has performed the first-ever Transluminal Balloon Angioplasty of Common Iliac Artery jointly on December 18, 1993) and lateral pancreatojejunostomy, distal pancreatectomy with splenectomy for tropical Chronic Pancreatitis (TCP) on September 26, 1997 in Assam and Northeast India. Dr Ali also performed the first ever Omentopexy by hand for peripheral vascular disease (October 13, 1995), Left Liver Lobe Resection for Carole’s disease (June 15, 2002), Parathyroid glands resection for primary hyperparathyroidism (May 14, 2009), Triple gall-bladder surgery (October 14, 2008) and radical thyroidectomy for Medullary Carcinoma of Thyroid gland (May 27, 2008). He was instrumental in starting laparoscopic surgery in the department of surgery at Gauhati Medical College and Hospital (GMCH) from February, 2005.

Associated with many socio-health organizations, Dr. Ilias Ali has also been parallely working for women education, empowerment and environmental protection. A co-author of a book on AIDS in Assamese, ‘Kuri Satikar Mahabyadhi – AIDS’, his book on population explosion (in Assamese), ‘Jana Bisfuranar Pom Khedi’, was widely lauded by the intellectuals of the State. His efforts to create awareness about the dangers and consequences of unabated population explosion on society through articles in local newspapers, participating in discussions and talk shows in electronic media, including Doordarshan and All India Radio, has led to Prof Ali becoming a household name in the State of Assam.

Post retirement from government service, Dr. Illias Ali, through his maiden venture, ‘Global Hospital of Surgery’, and his family trust i.e. ‘Maleka Foundation’, has not only been providing all-round assistance to the underprivileged and marginalized sections of society but has also actively participated in family planning missions by providing logistics and manpower. In an absorbing discussion with melange, Dr. Illias Ali narrates his childhood days and journey so far.

Ans: I was born to a cultivator’s family on August 9, 1956. My father was a respected cultivator of our locality and he used to teach the other villagers different aspects of seedling, sowing, plantation and harvesting. My mother was a kind-hearted woman and she was respected by everybody. I can still recollect how she donated things in cash and kind to the needy villagers who approached her for help.

The name of my village was earlier Jajia and it was later changed to Ghopeli. It was, at that time, very remote, beyond the reach of modern development, nearly five and a half kilometers to the west of Sipajhar of Darrang district. There was not even a primary school for the children but it was full of natural bounties.

Ans: My schooling started in the first part of 1962 when one fine day my brother enrolled me into a school, Bahmara Primary School, which was located in a neighbouring village. There was no desk or bench in the school and we used a cot made of bamboo to sit and learn. We used to do our homework on banana leaves by using a indigenous variety of ink. We, four or five friends together, prepared the ink using a special type of herbs mixed with charcoal.

In November, 1965, the people of several villages adjoining ours gathered together at a cow-grazing field called Chengaliajher and decided to start a ME school there. We were invited to be the first batch of students in 1966. Though our classes were held under the open sky, very soon a thatched hut was built and we began taking our studies seriously with new aspirations. Though our school was only a thatched housed without having even a blackboard, desk or benches, it was still a university to me, primarily because the people of our village built it with a lot of dedication. Even we helped in the construction by collecting bamboos and other donations – be it in cash or kind. The first batch of our school passed out in 1973 and I went to Cotton College for my pre-university. I then completed my MBBS in January, 1992 and Masters degree course in General Surgery from Gauhati Medical College in 1987.

Ans: I got married to Saira in 1986 and were blessed with two children – my elder daughter Ayesha and son Iqbal. Both me and my wife started a private surgical hospital at Sijubari area of the city in 2004 with the basic objective of promoting nation building and also to provide surgical services to needy people at an affordable price. We also started a charitable trust, Maleka Foundation, in the memory of my father.

Ans: Due to unprecedented population growth in our country, today, even after 62 years of independence, our country is facing a shortage of clean water, air, food, shelter and other basic human necessities like medical care, education, proper sewage treatment and waste disposal procedures, which are necessary to sustain life. There is fierce competition over the nation’s limited natural resources, leading to quarrels between States, communities and even families.

Ans: I usually begin my lectures in awareness programs with global and Indian population dynamics and their deleterious effects on India and the earth. Then I talk on religious responsibilities of human beings in the protection of nature. After this, I talk on women education and empowerment of women. I also talk on early marriage and multiple marriages. I also point out the role of breast feeding for control of population. During my talks, I extensively refer to holy books, particularly the Quran and the Hadith. Towards the end, I elaborate on the different methods of family planning and their uses. I conclude the talk with an appeal to the audience to start a social movement against population explosion and to those audiences who are eligible for family planning to adopt any method whichever is suitable for him or her.