Listen to the song of the Kuli Sorai

The song of the Kuli sorai heralds the break of dawn in our city these days, and why not? The spring season brings with it many such natural treasures in our midst. And Rongali Bihu is not far either as the arrival of the Kuli sorai also marks the advent of Bihu in Assam. Strange are the ways of nature how it never fails to enthrall us and surprise us by maintaining a remarkable precision of the turn of seasons and all the trappings associated with them. The Gulmohar trees that were bereft of colour those past months are slowly showing promises of new flowerings. The sudden showers are washing away the dirt left by the dusty March winds, the trees are sparkling a squeaky clean green again.

How does the Kuli Sorai sense its impending date with spring, I often wonder? Where does it disappear once spring is gone? I wonder if they are migratory birds. Actually they are found abundantly in Assam in the deep forests of the State and their arrival coincides with the nesting period of the crows that overshadows every other avian in the vicinity. The Kuli Sorai migrates to the areas having a crow population during their mating season. So the melodious song of the Kuli that inflates our heart is actually the call of the male bird trying to attract and impress the female Kuli. However, the elusive Kuli is rarely sighted as it camouflages itself expertly in the foliage of trees. 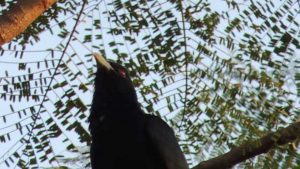 Our tryst with our neighbourhood Kuli Sorai began last year when we shifted to our new locality adjacent the river. The huge Mango tree standing majestically on my neighbour’s yard hosts the Kuli sorai every year whenever it is in town. And this year is no different as the Kuli sorai never misses its date with spring. Interestingly, they are stickler for punctuality too as sharp at 5.45 in the evening it begins its song as it tries to woo its lady love. The wee hours of the morning and a little later after sunset is the time that it sets aside for its song. Did you know that the male Kuli Sorai and the female Kuli Sorai followed different notes when it came to singing? While the male had an uninterrupted melodious note, the female sang in breaks. Therefore a few days back when we heard a different note following the uninterrupted song of the male Kuli we realised that our Kuli sorai had scored and was no longer a solitary crooner!

However hard we tried by straining our necks to peer through the leaves and branches of the old Mango tree to get a glimpse of the birds we failed miserably. They are indeed intelligent birds, following the principles of surrogacy when it came to giving birth to their young ones. Strange are the ways of Nature indeed for the Kuli does not make its own nests. It depends on other birds to lay its eggs. Incidentally, the Koel eggs hatch three days in advance of the host bird’s eggs where the Kuli lays its eggs. So before the host bird differentiates between its own brood and the intruder, the Kuli bird often flies off leaving the nest. Also often the Kuli, destroys the host bird’s eggs in order to make a place for its own ones. Ingenious and wicked aren’t they! Such a tiny bird and so much politics in it, truly amazing!

Meanwhile, while we Googled to find out more traits of the Kuli, I chanced upon a picture of the female Kuli which was in sharp contrast to the male one. While the male was black and long tailed with bloodshot eyes the female was a spotted greyish one. And it was then I gave a whoop of joy that I had sighted a real Kuli a few days back perched on top of a tall tree in our compound. I was unable to identify it that time but then realised it was the female Kuli after all. 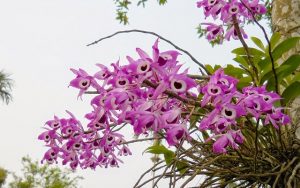 We take so many things for granted, events like the flowering of the orchid Kopou, the arrival of the storm Bordoisila, the Koo Kooo of the Kuli....these synchronized occurrences in nature, these things never change albeit they might if man continues intruding in the natural ways and destroying the equilibrium. Listen to the songs of Nature. Let us go back to Nature once again and undo the wrongs that have already been set into motion. Let us re learn the lessons taught by Nature and become a friend of our environment rather than turning into a rival.