October is the harbinger of the most favourite festivals of the Hindus, yes Durga Puja, Durgotsav, Sharatotsav is here once more. The festival, spread over a period of five days, marks the triumph of good over evil symbolised by the slaying of the demon called Mahisasura by Goddess Durga. Durga Puja celebrates the victory of Goddess Durga over Mahishasura, the buffalo demon.Though the rituals of Durga Puja start with Mahalaya, the main festival begins on Mahashasthi, the sixth day of Debipaksha.

Our mythology is rich with many explanations about the festival, according to one the demon Mahisasura had obtained a boon of invincibility from Lord Brahma which gave him the power of becoming immortal. As according to the boon no man or God could kill him. So hetook full advantage of the boon and started harassing everyone and even chased the Godsout of heaven. 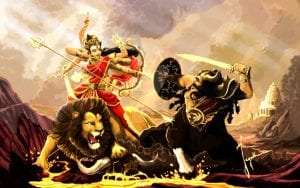 The demon king had become unstoppable and his increasing cruelty against the gods led them to plead with Vishnu to annihilate the demon. The Trinity of Brahma, Vishnu and Maheswara (Shiva) come together to create a powerful female form with ten arms – GoddessDurga or 'Mahamaya', the Mother of the Universe who embodies the primeval source of all power.

The gods then conferred upon this Supreme creation their individual blessings and weapons.Armed like a warrior, the goddess rides a lion to battle with the Mahisasura. This led toa fierce combat where the 'Durgatinashini' is able to slay the 'Asura' king with her trident. Heaven and earth both rejoice at her victory.

Goddess Durga’s arrival on Earth is identified as Mahalaya, which heralds the beginning of Durga Puja. Though many of us are too involved in our daily grind but it is the telecast of Mahishashura Mordini during Mahalaya that heralds Durga Puja. A tradition going on since ages, the Stotra permeates thepuja spirit in every soul. The Annihilatorof Mahishasura is a widely popular early Bengali radio programme that has been broadcast since 1931 on All India Radio (AIR).It is a one and half-hour audio montage of Chandipath(chanting from Chandi) recitation from the scriptural verses of Sri Sri Chandi or Durga Saptashati…

This program has become synonymous with Mahalaya which is celebrated to usher the Debipaksha lunar fortnight and the Durga Puja.

Mahishasuramardinistotra is a popular devotional stotra of Goddess Durga written by Guru Adi Sankaracharya. This devotional verse is addressed to Goddess MahisasuraMardini, the Goddess who killed Demon Mahishasura. MahisasuraMardini is the fierce form of Goddess Durga Maa (an incarnation of Goddess Parvathi), where DurgaMaa is depicted with 10 armsriding on a lion or tiger and carrying weapons along with assuming symbolic hand gestures or mudras.

Finally, the mantra narration ends with the refrain of mankind's supplication before this

Mahalaya marks the beginning of the annual Durga Puja festival. On this day, Goddess Durga is believed to descend on Earth, her ‘paternal home’, every year. Mahalaya occurs on an Amavasya, the last day of the dark fortnight (Krishnapaksha) in the month of Ashvin, according to the Hindu lunar calendar. Devipaksha begins the next day heralding the ten-day festival of Durga Puja. Many offer prayers to their ancestors during Mahalaya as it is believed that it is auspicious to remember one’s forefathers.

But it is the voice behind the Chandi Path of Mahalaya, Shri Birendra Krishna Bhadra, whohas etched himself in our psyches when it comes to heralding Puja. We need to hear his voice singing the Chandi Path to really confirm the arrival of Durgotsav. He is the onewho has made Mahalaya a memorable occasion to one and all, is the magical voice behind the “Mahisasura Mardini.” 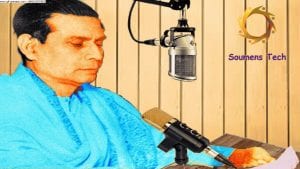 The legendary narrator recites the holy verses and tells the story of the descent of Durga to earth. It was on the day of Mahalaya, the beginning of"Devipaksha", that the Gods and Goddesses woke up to prepare themselves for Durga Puja.

In 1931, Mahalaya was first broadcast over the radio in Akashvani, Calcutta. Bhadra died long ago, but his recorded voice still forms the core of the Mahalaya program. In asonorous, reverberating voice Birendra Bhadra renders the Mahalaya recital for two thrilling hours captivating every listener in every household with the divine aura of his narration.

Decades ago there used to be loud speakers installed in every strategic locations broadcasting the Chandi path and it sure made Durga Puja a magical experience. Though the times have changed and we can listen to the Chandi path with a click of a button on our phones but tuning into it in Mahalaya has a charm of its own. This year would be nodifferent either, so once again let’s immerse in this spiritual rain and remove the darkness that seems to have cloaked humanity and defeat the evil that threatens to annihilate us.