When it comes to ethnic food, Naga food is definitely one of the most loved cuisines amongst the people of Guwahati. A host of ethnic Naga restaurants have sprung up in the city in recent times which cater to the people’s love for Naga cuisine. One of the new entrants in this field serving Naga cuisine in the city is Naga Food Konspiracy. The restaurant is located in the popular Central Mall in Christian Basti area of the city. 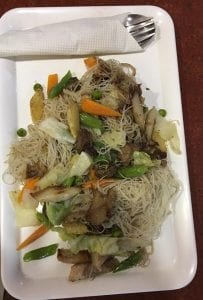 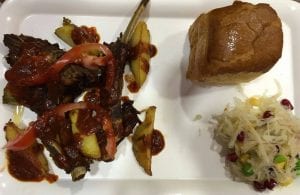 Although a relatively new entrant, the place is presently the buzzword among all lovers of Naga cuisine. Located in the food court of Central Mall on GS Road, the place does not confine itself to serving the usual fare of rice and pork dishes found in Naga restaurants. It serves lesser known Naga dishes, bringing a whiff of freshness to the otherwise dormant food scene.

The idea of Naga Food Konspiracy was conceived amongst three friends Aren Phom, Lechen Kichu, and Vikas. All the three are foodies and soul cooks.

“We always felt the need for a place which serves authentic Naga food. Naga cuisine and flavours are still unexplored and underrated. What was being served as naga food was standard and nothing was done to take it beyond the standard dishes,” says ArenPhom, one of the co-founders of the restaurant. 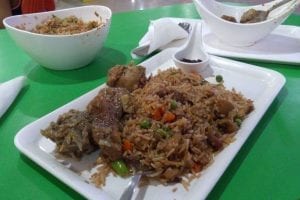 With the three proprietors of the joint being foodies, it is but natural that they add their own twist to the dishes. The eatery laid more stress on serving items which were not available in Guwahati earlier. They also experiment a bit with traditional Naga dishes so as to make them more palatable for contemporary tastes.

As Phom says,“We decided to take Naga flavours to a new level and worked out dishes which were not existing in the market. Our menu is divided into four major sections. The items in the first section are meant to satisfy general taste buds and comprises of the standard Naga dishes.The second comprises the lesser known home soul food like the Ghalo, Amsu,Anphat, etc. The third section is the Naga Fusion which is the most exciting.In this section, we created new items using traditional Naga flavours and dishes like the Smoked Pork Salad, Chicken Salad, Pork Biriyani and the ike.The fourth section is more of a Chinese menu of dishes served with a Naga twist.”

It is generally seen that ethnic restaurants fail to recreate the real essence of the dishes in modern kitchens. In order to provide the real natural flavour, the proprietors of the eatery source all their ingredients from Nagaland. “To maintain our tastes, we source all our spices,herbs and smoked meat from Nagaland directly,” she says, adding, “We also want to make available the best ingredients from Nagaland. Items like Raja Mircha, dry and fresh bamboo shoot, herbs and spices, apart from pickles and organic juices,and the like, are available for sale in our counter. 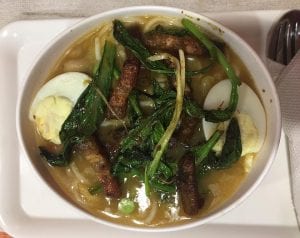 The place is located in a food court which makes it convenient for those in a family with different food choices. Naga Food Konspiracy has partnered with food service providers,PicknDel, and City Ora through their app for home deliveries.

A customer Joydeep Hazarika said, “This place is at the Central Mall food court. I had often noticed it while coming out from the movies above. Today finally decided to try something out. I'll be quick. This place is good. Food is good. A little overpriced for sure. But what can you expect from an outlet at a mall food court? They have a decent range on the menu. I went for a pork fried rice and fresh smoked pork with bamboo shoots and naga spices. I must say I quite liked it. One thing I was concerned about was the quantity. Gladly I was satisfied in that department. Nothing to speak about the sitting arrangement and ambience here. It's a food court. Pick a spot, sit down and eat out among the crowd. But overall it was a satisfying experience with some good Naga pork items on the platter for my hungry stomach!”

Another customer Mriganka Choudhury opined, “It was my first visit to this place and boy, was I bowled over or what? For a die-hard pork lover like me, things don't get any better than this. I ordered a plate of pork momos, a plate of pork sausages with salad and a plate of pork ribs with fries and salad. The momos were good but the sausages and ribs were outstanding. The sausages were juicy with the right amount of seasoning and spice. The ribs were cooked to perfection. Special mention must be made about the salad that was served along with the sausages and ribs; pomegranate seeds, cucumber and raw papaya tossed in salt and pepper. The owners of this place were also very friendly. Highly recommended.”

Another food reviewer Sandipan Borthakur feels that the place would do well with a bit of more marketing and promotion. In his words, “This place isn't known to many. It serves authentic Naga cuisine at prices which are a li'l bit high (could have been a bit less though) but the taste is great! I would love to go there once again and have a meal, hope I can do it soon, fingers crossed. Positive word of mouth and a bit of promotion would go a long way in letting more and more people know about this place.”