Of Film Fests and Films

Art, architecture, music and culture are the benchmarks of the greatness of a nation and the index of civilizations' creativity and refinement. Thus, the exalted Tragedies of the Greeks and the architectural triumphs of the Egyptians and later the Romans, remains as the pointers of such great civilizations in all their enormity.

But all that needed royal patronage which however was provided only by royalties of those civilizations that were rich in tradition of such refinements. That were only possible in economically and militarily stable nations. Interestingly though, only those nations who were cognizant of the fact that it was not just military might and economical stability that actually conferred greatness but valuing the importance of its culture and its ethos. And this were true not just in ancient age but also in the more recent medieval and still recent modern times.

We cannot deny the fact that if royal patronage were not provided to composers like Maestro Wolfgang Amadeus Mozart, Capelmeister Johan Sebastien Bach and Kammercompositeure Ludwig Van Beethoven, Capelmeister Joseph Hayden and Antonio Salieri by the royal courts of Austria, Germany and Polland, the world would not have known the Western Classical music in its current form as it is today.

Same is the case with cinema, which, as an art form is most popular for well-nigh five quarter centuries. Because in modern times it is cinema that is the index of the greatness of a nation and its cultural ethos. It is the reflections of the thinking of a population, and the refinement of a region. But serious cinema needs patronage from the State. And especially in a backward region like Assam, this assumes much importance. Because Assam with a population of more than 35 million people have less than 50 cinema halls. We had at one time around a 100 cinema halls, but not anymore. And inspite of great demand, we could not get our much needed mini cinema in the interiors of Assam.

Till last year the exposition of world class cinema was done with great difficulty by clubs and societies, notable among them was Guwahati Cine Society and AKASH. Since last year it is being done on a scale that is breathtaking in its scope. The present government has made the right move by arranging the State film festival with the structure and format of an international film festival. Thus was born the Guwahati International Film Festival, GIFF in the year 2017.

The festival had created a lot buzz and excitement and shown a lot of promise last year in its first edition. International actors, the audience, the distinguished jury, and the critics were very much impressed by the quality of the films including that of the regional films that were exhibited and the seamless manner of the executions. 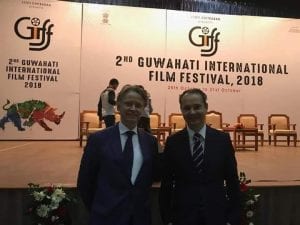 If the first edition of the festival had created a buzz, the second edition was mind blowing in its entirety and the breadth of its diversity, with more than 107 films curated by specialist curators, with the entries from 50 countries with a special focus on 10 South East Asian films. There were a discerning national and international dignitaries and film lovers with more than ten ambassadors, high commission officials and other diplomats that included the ambassadors of Croatia, Serbia, Lithuania, Latvia, Estonia, Argentina, Myanmar and Deputy High Commissioners of Singapore and Bangladesh.

The seven days of enjoying world class films together with taking part in animated discussions,interactions by more than 6000 registered participants in itself is a great feat.Most importantly the participation of more than 3000 registered students from all over Assam was again a move in the right direction.

Watching more than a hundred films in seven days is well-nigh impossible. Of the few films that this writer had enjoyed in the festival, two films actually stood out. Perhaps there were more such films or even better films but the writer can comment only on those that he had enjoyed.Lithuanian film maker Egle Vertelyte‘Miracle’ and Turkish Director’s ‘Black Crow’ were two films that touched this writers heart. 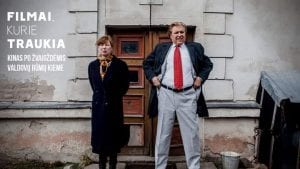 ‘Stebuklas’ or Miracle is a very powerful metaphorical period film set in the post-Soviet era in Lithuania. Lithuania had got its independence but the conditions were getting worse. Thanks to the winds ofGlassnost and Perestroika, the cooperative model of demand and supply that existed in the soviet era was crumbling.

Despondency and desolation was everywhere. Irina, the middle-aged manager of a big pig farm that was successful once is struggling now. She has not been able to pay salaries for two months to the workers and neither was able to get payment from the Russian buyers for the ‘truckloads’ of consignments earlier sent. She pleads with the buyers for the payment so that the hungry children of the workers, who are also stakeholders of the farm can eat. The latter however are insensitive to the softer side of Irina.

For them she, with her stern and harsh exterior is the villain and they make her the butt of their jokes. So she is all alone in the fight for marketing the pork meat and sausages and trying doggedly for financial infusion from the apathetic banking system. Moreover,her personal live was all topsy-turvy with a drunk as a husband and also the fact that she is also infertile. The husband is himself a victim of the shutting down of industries in Lithuania and the subsequent lay-offs.

When she was almost giving up on her quest a Lithuanian expatriate in form of a loud and pompous American, Bernadas, makes entry with a bailout package for the pig farm. The solution he offers is enthusiastically accepted by the workers and he is hailed as the saviour. And Irina too is drawn by the exuberance of Barnabas. Her husband fights a losing battle as she is gradually enamoured by this swashbuckling American saviour. The writer's heart goes out to the husband at the misery melancholy and helplessness etched in his persona.

However, things are not as they seem to be. Barnadas’s character is a metaphor for all the promise that the West and especially America had promised if these erstwhile nations if they break away from the beleaguered Soviet Union. But then the West never had the best interests of the people of erstwhile Soviet republics in their mind when they promised help and assistance. “This is what happened in front of my eyes when I was growing up. The West actually wanted to use us. They exploited our vulnerable situations and our resources. And we in our naivety believed them. We were lured by their false promises.” said EgleVertelyte, the director.

In the film,Barnadas’s scheming mind is revealed layer by layer by Irina. And yet she is lured by the promises of the bailout as Bernadas starts cutting down the oak trees in the farm,culled the pigs and tore down the farm reducing it to rubble and ultimately seduces Irina.Then in the end, Barnabas himself is devastated as his scheme fails. It seems there is no end to Irina and her workers’ woes.

And then a miracle happened. Not in the lines of expectation but in a way no one thought of or expected. The infertile Irina conceives. In the film,the ‘Pig Farm’ is a metaphor for the struggling nation. Irina signifies the never-say-die attitude of the eternal fighter. And Bernadas symbolizes the West and its false hopes.

The director Vertelyte’s touch in seamlessly integration the main narrative and the sub narratives speaks volume of her skills as a screenplay writer. She has very successfully and tersely told many stories in a span of 91 minutes. Full marks to the director and full marks to the actors, especially the lady who portrayed Irina who is the Egle's namesake.

Such was the experience of the film fest and the bag full of films it exhibited.Now that the audience has got the taste of class, it would be only natural for them to expect even more in the next edition in 2019.Best Wishes to the Guwahati International Film Festival and long life to the Initiative.