History has not produced many personalities who could create an unprecedented impact on the course of history during their respective lifetime and whose life and death were always shrouded in mystery. These larger-than-life enigmatic personalities did things, in a relatively shorter lifespan, which are way beyond the comprehensions of an ordinary mortal. Their untimely and unnatural deaths were also mysterious or controversial, the reminiscence of which still lingers among the historians and in the minds of the masses, alike. The life and death of Netaji Subhas Chandra Bose is one among those few.

Born on January 23, 1897, Subhas Chandra Bose was a legendary tragic hero of India's struggle for independence. During his life time, for many of his compatriots, he was a messiah with almost a phantom-like image. Even after almost seventy four years of his reported death, he continues to have an unfading sway over most Indians who remember, respect, love and consider him as their idol and hero. Most of his actions during his short life of just 48 years, were certainly heroic, inconceivable to any ordinary man. A brilliant student and born leader in school and college, after obtaining a first class degree in philosophy, he went to England to appear for the elite ICS exam under pressure from his successful lawyer father; stood fourth with limited preparations in 1920. But resigned from the coveted post almost immediately because he had no intention to serve the oppressive colonial British regime. 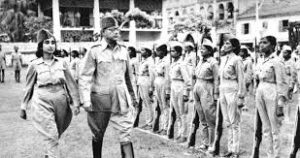 He joined the Indian National Congress, met Gandhiji and became very active in the freedom struggle. During the two decades, from 1921 to 1941, that he was active in Congress politics, his rise through the ranks was meteoric. Incidentally, the greater part of it, he was either jailed in India or exiled, generally without any legal charge. For the British, Bose was "an implacable foe of British Rule in India". The British dreaded him like no other Indian leader. Said Bose, "It is of course a tragic thing that the best and the most creative years of one's life should be spent behind prison walls, but that is the price which enslaved people always had and always will have to pay in this world."

At 41, Bose became the youngest ever Congress President; appeared in the cover of the prestigious "Time" magazine, the second Indian politician after Gandhi. Prior to that, he was the Mayor of Calcutta, President of Bengal Congress and a member of Bengal Legislative Council, the seat he won while in prison. Bose's second term as the Congress President was opposed by the right-wingers, including Gandhi himself. But Bose won hands down. Wary of his progressive image and popularity, the right-wingers later forced him to step down undemocratically. His main ideological difference with Gandhi was that he advocated use of force along with non-violent non-cooperation. Though not adversaries, with Nehru he had a love-hate relationship. 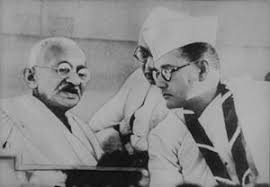 Bose's real dare devil activities started in January 1941 while in house arrest. He sneaked out of the British clutches in disguise as a Pathan insurance agent and via Delhi and Peshawar reached Kabul, negotiating rough treacherous terrain on walk or on a mule. From there, he reached Berlin via Samarkand and Moscow. The Britishers got clue of his presence in Kabul and planned his assassination in Turkey, but in vain. In Germany, he tried to influence Hitler to support the Indian freedom movement, but Hitler cold-shouldered Bose's endeavors. However, during the period he single-handedly kept broadcasting India's case for freedom through a strong radio transmitter, much to the embarrassment of the British.

In February 1943, he boarded a German, then a Japanese submarine and after four months-plus of hazardous under-water journey through enemy territories, he reached Tokyo safely. The Japan government whole-heartedly extended support to Bose stating that, "India is for Indians." He moved to Singapore to take charge of the Indian Independence League and then the reigns of Indian National Army (INA) or Azad Hind Fauj, as its supreme commander and with Japanese help, formed the Provisional Government of Free India (PGFI). Technically, he was the first premier of the Government of India, albeit in exile. In March 1944, INA with Japanese army launched an offensive from the east and raised Indian flags in Manipur and Nagaland. But on account of poor supply line, severe bombing and malaria INA had to retreat after one of the fiercest battles. But the hypnotism of INA's velour cast its spell on the Indian psyche in the mainland uniting them all, rendering INA a nightmare for the British. 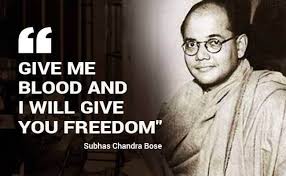 Bose's cherished dream of winning independence through armed struggle got totally shattered at Japan's surrender after atom bombing by the USA, in August, 1945. After Japan's surrender, Bose left Singapore for Tokyo via Saigon, then boarded a military aircraft on August 18, 1945. After refueling at Taihoku (Taiwan), the aircraft crashed on the runway and was engulfed in fire. Bose received severe burn injuries and succumbed to it in the military hospital there on the same night. Dr Shimbun, Director of the hospital, signed the death certificate who also re-confirmed it later. Out of three official enquiry commissions constituted by the Government of free India, two have univocally confirmed Netaji's unfortunate death. Many enquiries by UK, Japan, Russia and Taiwan also confirmed the same.

But controversy never left him alone even after his death. Many of Netaji's ardent fans refused to accept his death in the crash and spread concocted cock-and-bull stories, like his appearance as some 'Gumnami Baba' or a Buddhist Monk, etc. After declassification of Netaji files recently, such stories should fade away. On his birth anniversary on January 23, let us pay our sincere-most homage to one of the greatest Indians and salute him in the term coined by him, 'Jai Hind'!