Although the F&B industry of Guwahati has developed at a rapid pace, Guwahatians had always felt the need for a quality restaurant serving fresh sea food and unique fusion food items. While there are indeed a few restaurants serving sea food as well as ethnic food, they either fall short on the authenticity of the dishes served or the quality of the sea food items served.

Most of the seafood items served in Guwahati are either frozen or stored for long periods of time making them unfit for personal consumption. Another thing which is found to be sorely missing in the restaurants of Guwahati is a decent fresh ambience which gives one the zest to dig into the food served in front of them and make the dining out experience all the more memorable. 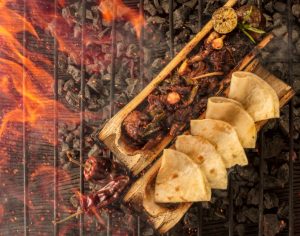 However, foodies of the city now have a chance to rejoice. Santa Fantasea - the popular restaurant chain of sea food and tribal cuisine based in Kolkata has recently opened two new outlets in the twin cities of Guwahati and in the outskirts of Shillong, Meghalaya. While the Guwahati outlet of Santa Fantasea is located in RG Baruah Road opposite Doordarshan Kendra, the Shillong outlet is located in the premises of the newly launched La Nicholas Dei Da Kine Resort, Barapani (Umbir).

Santa Fantasea is a dream-come-true for food lovers of Guwahati as the city has now got a quality restaurant serving delicious sea food and tribal food in a sumptuous manner. Served in a decent and highly hygienic environment at very reasonable prices, this restaurant is fast becoming the talk of the town.

Santa Fantasea, a multi-cuisine restaurant, has earned a massive fan following within a short time of its launch. The restaurant chain is owned by Koushik Ghosh and Avijit Saha.

Talking about the genesis of Santa Fantasea, Avijit Saha says, “We are basially hoteliers from Kolkata who were working in Orissa. We used to do a lot of jungle safaris in Orissa and we saw a lot of different preparations of tribal cuisine. Those dishes were prepared with very less spices and oil and were totally delicious. So we thought why not modify these dishes a bit and serve them to people in Kolkata? Also at that time i.e. around five years back, seafood was not very popular in Kolkata and apart from the five star hotels which served squids and octopuses at exorbitant prices, there were not any outlets serving seafood. So Santa Fantasea was born with the basic idea of serving tribal cuisine and different varieties of sea food in a hygienic environment. So touchwood, we have been fortunate to receive a tremendous response in the last few years and we opened four more outlets in Kolkata. So with the expansion of our chain in Guwahati and Shillong, we have a total of seven outlets of Santa Fantasea in East India.”

Spread over a large area of around 1500 square feet, the first thing that strikes one as he or she enters the restaurant in Guwahati is the bright and spacious decors. The restaurant is manned by two chefs and two bearers and has a seating capacity of 48 people. The restaurant also has a separate lounge, which can seat around 18-20 people, for private parties. 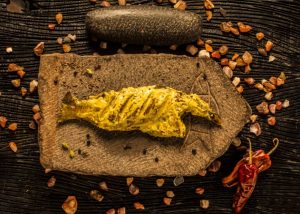 When asked about the speciality of Santa Fantasea, Koushik Gosh says, “Our only speciality is that the food we serve can’t be find in most places of India. We are the only restaurant in India which serves tribal cuisine and different varieties of sea food.” Some of the signature dishes include Bamboo Biryani, Crack Leaves Mackerel, Wine Chill Mackerel, Smoked Crabs, different varieties of squids, lobsters and octopus, etc. The Tribal Dishes include Bansa Pora Mutton (Mutton marinated stuffed in bamboo and cooked in tandoor), Jhupu Pisi’s Mutton Delicacy (Smoked Mutton with Mustard seeds without oil), Tilhou Kheer (A Manipuri dish, Tilhou is onion), Wild Red Rice, and a host of other mouth savouring items. 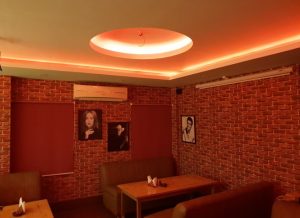 While the tribal fusion food and sea food is undoubtedly the biggest USP of the restaurant, the owners feel that their emphasis on serving fresh and high quality sea food is their biggest plus point. “We feel proud to say that we are the only restaurant in India serving very fresh sea food rather than frozen sea food. Our sea food items are captured in Orrisa and they are transported to Kolkata in our AC vehicles within 4 hours. So the sea food products reach Guwahati within a maximum span of 24 hours. You just have to try our Squid and Octopus and you will immediately feel the difference in that taste.”

A meal for two, including appetisers, starters, main courses and desserts, will roughly cost INR 550-600 including taxes. So next time you are on the lookout for some extremely fresh sea food or want to test your taste buds with some exotic tribal cuisines, we suggest you do give Santa Fantasea a try!