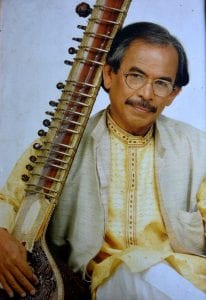 In the galaxy of Assamese musicians and performers, there are but only a handful of personalities who have managed to attained eternal brilliance through their musical prowess and compositions. One such eminent virtuoso in our midst is none other than Hem Hazarika, a Sitar maestro who has spent his entire lifetime in the pursuit of promotion of excellence in music. A respected name in the classical musical as well as the modern musical fraternity, his life is an embodiment of an individual’s pursuit for excellence.

A perfectionist at heart, Hem Hazarika’s entire life journey has been bound together by a single thread and that is the thread of music. An artist who had always gone against the established norms to attain perfection in the field of music, his life been a continuous struggle to attain perfection and also, at the same time, establish himself in the social firmament and also as a family man. A disciple of Sitar legend Pt. Manilal Nag, Hazarika spent a number of years in Kolkata under the tutelage of the eminent Sitarist and this stint, further helped in nurturing his latent musical prowess. Over the last 50 years, Hem Hazarika has developed a distinctive style of his own and has strived to pass on all that he has learned to countless students spread across entire Eastern India.

Although Hem Hazarika’s name as a Sitar maestro needs no introduction in the musical circles of the country, many are unawares of his most recent path-breaking works. After more than 50 years of constant practice and association with the Sitar, Hem Hazarika had last year developed and released his own new musical instrument – the Hem Veena. An electric version of the Sitar which resembles the Zitar, the Hem Veena is unique in the sense that the bars or ridges are based in a semi-circular pattern. The Hem Veena is the result of a lifetime’s worth of study and it is interesting to note that Hazarika had earlier developed four other versions of this instrument before he finally deemed it fit to release this version. 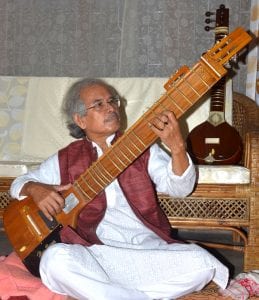 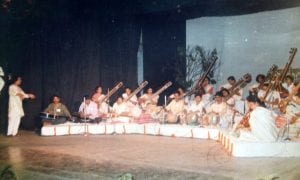 Last year, Hazarika added yet another feather to his cap when he released his own composed Raag i.e. RaagKolamohini. While most Sitarists are content to playing the age-old raags, composing an altogether new Raag speaks volumes of the talent, passion and dexterity of this legendary Sitarist. It may be pertinent to mention here that he is the foremost Sitarist to host orchestras with the Sitar in this part of the region. Besides the numerous Sitar orchestras that he initiated, Hem Hazarika’s symphony of 100 Sitars in the 2nd Guwahati International Music Festival held in 2012 is still regarded as a pioneering achievement by a Classical musician.

Hazarika’s musical endeavours are equally augmented by the support of his wifeSwapna Hazarika, who is also an accomplished Sitarist in her own right. Together, they run Talim, one of the pioneering institutes of classical music in this part of the country. Hem Hazarika and his wife Swapna Hazarika have passed on their rich musical legacy into the hands of their only son Subhankar Hazarika, who has emerged as one of the top-ranking Sitarists in the country today. A pass-out of the famed ITC Sangeet Research Academy, Subhankar, who plays the Zitar, also learnt under Pt Manilal Nag and has successfully experimented with the Sitar and blend it with other musical instruments.

The melange team recently entered into a conversation with Hem Hazarika to know more about his life and his journey in the world of music. Following are excerpts:

At the outset, please tell us a bit about your childhood and growing up days. How did you get drawn towards the world of music?

Ans:I was born on March 1, 1950 in BokporaMajgaon village near Dibrugarh town. Although just 5-6 kms away from Dibrugarh town, the village was inaccessible by car or even bicycles during my growing up days. I was born to late Bhabakanta Hazarika andlate Sarbeshwari Hazarika as the youngest amongsix siblings; I had five elder sisters and an elder brother. My father was a spiritual person and as a child, I used to listen to him recite verses from the kirtan and sang borgeets very early in the morning. Although I could not understand them at such a young age, my father’s recital left a long lasting impression in my tender mind. Much later on in life, I heard those same borgeets in All India Radio. My father was a very learned person and a saint and he had profound knowledge of the holy scriptures.

I did not study much and passed my matriculations in 1966. However, I had taken up music much earlier than that. My father was very much interested into music and I have still preserved his harmonium which was the first instrument that I played. My elder brother, who has passed away by now, was also interested in music. I remember trying my hands with the harmonium, banjo and violin before finally deciding to play the guitar. I am an entirely self-taught artist.

Later on, in around 1969 or so, I decided to learn the guitar and came to Guwahati to learn Hawain Guitar under late ChanchalDey, who was a very popular and respected guitarist of those days. Within six months of learning under him, I started doing stage performances. He taught me the basic fact that it is essential to learn the fundamentals of music before trying your hands on any music instrument.

How did you pick up the Sitar or made your foray into Classical music?

Ans: There is an interesting story around how I started learning the Sitar and I feel the people should know about it. As a child, I used to respect Classical music but never harboured any desire to learn it because I knew it was very tough Indian tradition. I had already mastered the guitar at an early age and while I was a regular performer on stage, I had a strong desire to play for All India Radio. Playing for the radio used to be very prestigious in those days and the examination for selecting performers also used to be very tough. So in order to prepare myself for the radio examination, I went to a music school in Amlapatty in search of a teacher who could prepare me for the examination by telling me what kind of songs I should prepare for the same. 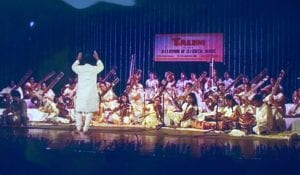 After taking admission, I realised that the instruction did not know how to play the guitar and decided there was nothing I could learn from him. So, I decided that I would not learn under him and went to meet late Nirmal Chakraborty in the school’s office to convey my decision. Sir, however, told me to learn Sitar under Nilima Borthakur who had come after passing her Visharad from Lucknow. That was in 1972 and after I picked up the Sitar, I slowly stopped listening and playing modern instruments.

I learnt under Nilima Borthakur for around one or two years. But when I realised that I was being taught just to attain the Visharad degree, I decided to stop learning. I did not want to learn any instrument just to pass an examination and earn money. I wanted to learn music for myself. So I decided I would go to Kolkata to learn under Pt. Manilal Nag. But it took me quite some time to gather enough money to be able to go to Kolkata.

You are one of the foremost disciples of Pt. Manilal Nag. How was your experience learning under him?

Ans: Getting to learn under Pt. Manilal Nag was a life-changing experience for me. While I stayed and learnt with him for eight consecutive years, I continue to be in regular touch with him even till today. I developed a close rapport with Guruji and he helped me realise my full potential. Right from the first day till the last day I spent with him, I used to arrive at his doorstop at the fixed time and record whatever he taught. Guruji encouraged us to record whatever he taught which is, ironically, not encouraged in the music circles here. We were taught to be able to compose ourselves, not to play something which has been composed by someone else. We were taught in a totally different Guru-Sishyaparampara as per the real tradition. In fact, I met my wife SwapnaBorthakur in Kolkata and got married towards the end of 1984. She plays really very well and nowadays, she has also developed tremendously as a Sitarist.Our son Subhankar also learnt under him before he got admission in ITC Sangeet Research Academy. 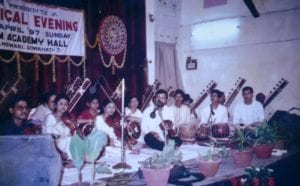 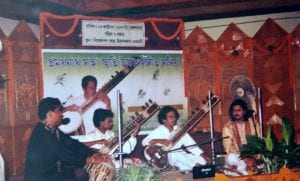 What did you do after arriving to Guwahati?

Ans: Immediately after coming back to Dibrugarh from Kolkata, I appeared for the auditions of All India Radio and passed as a B grade artist right in my first attempt. I later reached the level of B high artist but did not appear for any examinations after that. After about five years in Dibrugarh, I came to Guwahati where there was a huge need for a Sitar player. I have been fortunate enough to work with almost everyone in the music industry of Assam since those days till even now.

Tell us about the Hem Veena and about your new Raag, Kolamohini.

Ans:The RaagKolamohini is a mixture of RaagKolabati and RaagJanasongmohini. As such, I have named it as RaagKolamohini. Whoever had listened to it has really appreciated it a lot. I did not sit down thinking that I would compose a new Raag. One day, I was humming my favourite tunes on the Sitar and somehow, it led to the creation of this new Raag. However, I must say that it is not easy to compose a Raag and one can do so only after reaching a certain level. So I guess my pursuit with the Sitar for more than 50 years now helped me compose this new Raag.

Regarding the Hem Veena, I always wanted to develop a Sitar where one can play guitar chords. I was discussing the same with my son, Subhankar Hazarika, and he encouraged me to work on it. Over the last four years, I started working on it and developed three prototypes. I rejected them because I myself found certain defects in then. The Hem Veena, which I released last year, was the fourth version and one can play a number of guitar chords in an electric Sitar. This is different from the Zitar (the electric Sitar) in the sense that the patterns of the bars and reeds are unique and one can play guitar chords in a traditional classical instrument. I have presented it in several conferences in universities like Tezpur University and they have been after me to apply for patenting it. But I am still working on it.

Ans: Around 60 years back, people did work on orchestras. People like late Kanak Das of Dibrugarh, IndreswarSarma of Jorhat did work on orchestras of various musical instruments. However, no one has ever worked on an orchestra of 100 Sitars. Retired IAS officer SwapnanilBarua, who was highly involved in the cultural arena, had opined that my book of my own compositions for orchestras, which I released last year, is also possibly the first such book to be released in Northeast India. 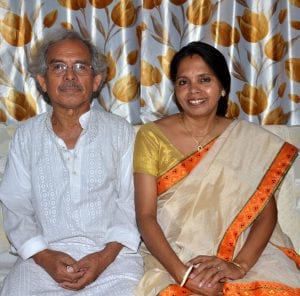 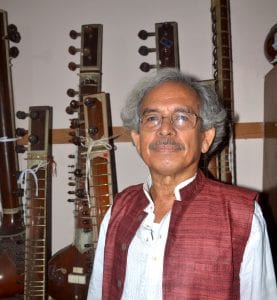