Famous Mauryan Emperor Ashoka build several Pillars across his kingdom which were known as the "Dharma Stambhas". There are four lions, sitting on the abacus, represent power, courage, confidence and pride. There are four of smaller carvings of animals namely lion, bull, galloping horse and elephant on the circular abacus are the guardians of the four directions. The wheel at the centre is called the Ashoka Chakra because it appears on a number of edicts of Ashoka, the most prominent among which is the Lion Capital of Ashoka. Each spoke on the chakra symbolises one principle of life and also the twenty-four hours in the day, which is why it is also called the 'Wheel of Time'. The presence of Ashok chakra in the flag indicates the strong bond of Nation with Buddhist faith. As the 24 spokes represent the 24 hours of a whole day, this is why it is also known as Samay Chakra. It inspires every Indian to work tirelessly whole day and also represents 24 qualities of a person.

The Ashok Chakra is the National Symbol of India and it is displayed prominently on all Indian Currency, the National Flag and Government stationery or offices. In Vaastu, the Ashoka pillar has excellent uses for improving your relationship with business partners. One can get prestigious posts in the government sector by using this wonderful remedy. Ashok Stambh benefits those whose work is slow due to the lethargic system of government. The Ashok Stambh also helps in getting government contracts for future help. It can be kept on the working table by a politician or businessman, can earn him tremendous name, fame and popularity. It even favors government promotions, grants and recognition in the world.

Politicians, specially the newly elected members can benefit a lot from the Ashok Stambha who were able to get prestigious posts in the central government in spite of their young age and inexperience. This remedy also benefits those, whose work or progress is slow due to the sluggish working of a government organization. The Ashoka Pillar also helps in procuring government contracts.

CAUTION: Do not place the Ashoka Stambh or Pillar anywhere between the South Zones and Southeast zones of the Office building. This will end up with conflicts with Government departments, prosecution and allegation.

DO NOT DO THIS ON SUNDAYS

As all the planets of our universe rotate around the sun, it is regarded as the King of all planets in astrology. In fact, all planets are supposed to be offshoots of the Sun.A strong sun or Ravi in the horoscope brings wealth, name & fame. It is not auspicious to take food glassware or utensils made of glass on Sundays. This brings poverty and loss of money. Avoid drinking in glass tumblers on Sundays 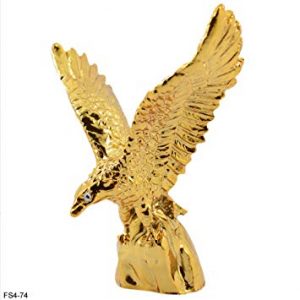 The eagle symbolizes freedom, strength, courage and far-sightedness. The eagle also symbolizes the path of enlightenment and education. The magnificent appearance of this statue depicting an eagle spreading its powerful wings symbolizes strength, courage and freedom, and would grace a home or office with its beauty and majestic symbolism. The Bald Eagle is found only in North America and it is the Symbol of United States representing strength and wisdom.

The statue of this bird is placed to display freedom, strength, courage and far-sightedness. It has various uses according to Feng Shui.

Ans: This is going to be quite elaborate and I have discussed them in detail in the earlier issues of melange. I am listing the salient features to be checked but all of them will have individual characteristics or rules. You may write to me for details of each one.

Important points to be considered while following Vaastu shastra for Home/ House:

Ans: Keep it in the east of his study table for focus and concentration in studies. It is also kept at north for job and career opportunities.