India is a land of diverse cultures, communities and beliefs and we must learn a few things from certain communities about their rich culture. Before we embark upon today’s mostly chanted words, “global warming”, “going green”, “forest preservation”, etc., a community in western Rajasthan has been following a tradition with their love for animals and their love for trees since last 500 years. A community who breast feed wild orphan animals to support them, preferred burial to protect trees and use dried cow dung or fallen tree brunches to lit their kitchen chulas. This community is named as the “Bishnois”. 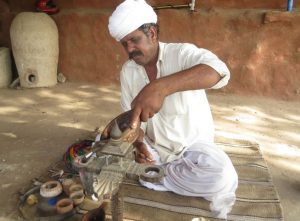 “Bishnoi” is the community which follows 29 principles/commandments given by Guru Jambheshwar. In their language, “Bis” means twenty and “noi” means nine. And out of those 29 rules, few of them are related to love for animals and love for trees. There is also a true story to showcase how strong their beliefs are. And they narrate the story of Amrita Devi, a member of the sect who inspired as many as 362 other Bishnois to go to their deaths in protest of the cutting down of Khejri trees in September 1730. The maharajah of Jodhpur, Abhay Singh, requiring wood for the construction of a new palace, sent soldiers to cut trees in the village of Khejarli. Noticing their actions, Devi hugged a tree in an attempt to stop them. Her family then adopted the same strategy, as did other local people when the news spread. She told the soldiers that she considered their actions to be an insult to her faith and that she was prepared to die to save the trees. The soldiers did indeed kill her and others until Abhay Singh was informed of what was going on and he intervened to stop the massacre.

In recent years, we have heard the news of hunting animals in jungles of Rajasthan by famous Bollywood actors and how Bishnoi community got offended about them and because of that the famous actors had to undergo imprisonment. And from that incident most of us have come to know about the community named “Bishnoi”.

Today’s tourism industry is giving enough facilities to the tourists to fulfil their dreams of going to various places, know their culture and communities. Seeing an advertisement in the internet, I made a plan to see this community on my visit to Jodhpur, Rajasthan. Accordingly I contacted Mr Dipak over phone and started my journey with him in the early morning 6:00 am in an open jeep from Jodhpur. 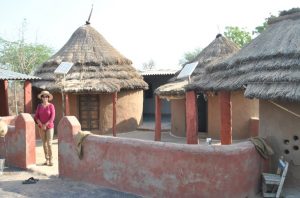 Mr Dipak is running a tourism industry himself to show the rich Rajasthani culture to the outsiders. He is very fluent in English and really having depth of knowledge about his state. According to him people from outside the country are mostly interested to know their culture and they enjoy the trip with him.

Our jeep was going through the jungles of Jodhpur. It was a nice experience going through the desert in the early morning. Everywhere the colour was almost orange and I really enjoyed my trip in that open jeep talking to Dipak. On the way, Dipak showed me many varieties of trees available in the desert like khejritree, babul tree and other green bushes. According to Dipak, the green bushes surrounding the Thar desert in Rajasthan were cultivated by British to bring greenery in the desert. However these trees do not have any use apart from using them as fence surrounding the house or use it in kitchen as fire woods.

In the very morning we could see beautiful peacocks, ducks, eagles, etc busy finding their breakfast food. It was a surprising scene for me to see big peacocks soaking in the morning sun sitting atop big trees. Indeed it was a breathtaking moment for me! Also we could see peacocks dancing in the jungle which was really enjoyable. In the jungle we could notice “teeters” who look like chicken and few jumping “chinkaras” who look like small dears and which are native to Rajasthan only. I was also lucky to see two numbers of “Nilgai” in the jungle, which peeped on our jeep while drinking water in a small pond.

Going through the jungles, we entered a village and the jeep stopped in front of a muddy house. In front of the house there was a Khejri tree and we saw a few cows resting underneath. We were welcomed by a huge moustached aged gentleman, wearing a white dhoti kurta and a huge turban. We first sat down on a “khatiya” made of coconut rope. The man then prepared something in an iron made structure where an idol of lord Shiva was engraved. Dipak explained that it is a ritual for Bishnoi community to welcome their guest with purified water using opium.

I was really surprised to hear about it. But Dipak said that it’s a ritual for the community to use opium to welcome their guest, use as medicine for small children and also for pregnant women. However, they use it in a very small amount. The aged Bisnoi gentlemen crushed a little portion of opium in the iron instrument and soaked it in water, offered it to God and gave it to me three times as a ritual.

After the welcome procedure, we were greeted by his family and I got the opportunity to see inside their house. Apart from their neat and clean two room small house they also have a small round mud house in front. We found their two children doing homework at that time who were smiling at us when we entered their room. There was a manual atta vending machine in the veranda and dried cowdungs were stuck on the veranda-wall which would be used as kitchen fire. The person was also showing us how to make the colourful turban from a 10 meter long and 1 meter width cloth in a few seconds!!

We came out from their house and Dipak was driving the car towards another spot to showcase their Kumbhar or potter work. We entered a village named as “Malai village”. In Rajasthan, the potters of Hindu and Muslim are known as “Kumbhar” and “Malai”. We stopped in front of a house with big compound. Most of the compound area was filled with big clay pots. We were greeted by a young gentleman. They are having a joint family who are in this potter business for long. He showed us how to make pots in the potter wheel. He also showed us preparation of clay before putting on the wheel. Looking at his smooth working on the wheel, it seemed the job is very easy. However when he asked me to do so, I tried but found it to be really difficult. However, with his help I could make a small pot. I was really happy looking at my creation. His extended family joined us and we had a great conversation. They had few potter wheels, one of them was machine driven.

Next we went to see the weaving factory. Rajasthan is famous for its hand woven carpets, razais, etc. We entered a beautifully decorated house made of mud with many rooms. In one room, two persons demonstrated the procedure of making Rajasthani carpets. Their weaving style is different from ours as people were sitting on the floor weaving on wooden structure kept few inches above the ground. Both the persons were working from two ends on the same carpet. Along with Rajasthani carpets, colourful Rajasthani bedsheets, salwar suits are very famous and those are made by using wooden blocks of different designs usingvarious vegetable colours. We enjoyed the demonstration of making those colourful clothes using block print methodology.

It was really nice to see the remote village of Bishnoi and witness their culture, livelihood, etc. I really enjoyed the beautiful birds, the sight of peacocks dancing in the morning, big camels taking leaves from big trees. While coming back, I saw a few shepherds going ahead with their herds of goats, sheep, etc, besides seeing Rajasthani women taking water on big clay pots placed on their heads, goats and cows quenching their thirst in the man-made water ponds, etc. Those were really beautiful rich moments of memories to cherish.

I thanked Dipak for enriching us with those beautiful moments. Dipak smiled at me and said, “Ma’am, please drop a few lines of your experience in our website.” I told Dipak, “It’s really a marvellous trip and I must write my experience so that people would know about this community with high regards.”