There is a sort of calmness in the city right now. Maybe it’s just the calmness before the storm. It’s not difficult to decipher the reason for Northeast India’s newest progressive glam rock band, “The final touch”, is all set to hit the streets and blow us over.

The Final Touch, better known as (TFT), was born in 2011 by the lead guitarist of the band Shihan in association with Sizzu, enigmatic vocalist of the band, Arju, drummer and Himangshu, bass guitarist. 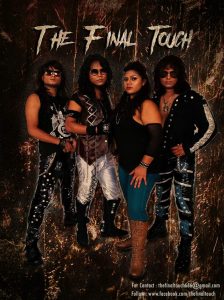 Shihan started this band with the objective of spreading the genre of progressive glam rock band which is quite a new concept in India. The band is highly influenced by the 80's rock band such as Rush, White snake, Europe, Queen, Kiss, etc. He was very skeptical about the success of the band considering that it is not quite the taste of the masses . But he went through with it and with the constant support of the band members he was able to put through good performances and bring together India's first progressive glam Rock Band.

TFT has performed many gigs in different parts of the Northeast as well as in live shows which have got them lots of appreciation from people all around. Recently, they have launched their first official video song called "Till the end" which is currently playing in all the major International music channels like Vh1.

Today, the people of Northeast are proud to have a band of such caliber performing so well internationally and it is our support which will give them the much needed pat in the back to reach further heights.