THE PERFECT WEEK-ENDER! 4the edition of NH7 Weekender captivates music lovers of NE

A plethora of music from various genres, food and gift stalls, and loads and loads of fun marked the fourth edition of the NH7 Weekender Festival held in Meghalaya last week. One of the most anticipated live music experiences in India, this year’s edition of Bacardi NH7 Weekender was held at ‘Wenfield’ - The Festive Hills, Thadlaskein, Lad Mukhla, Jaintia Hills. Spanning across two days, the festival witnessed a spirited response at its fourth edition, drawing huge numbers of crowd from across the Northeast. Music lovers of Assam and Meghalaya were seen flocking to Jaintia Hills in large numbers to be part of the festival and stay in the numerous campsites set up in and around the venue. 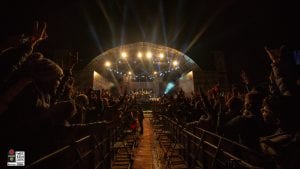 With the likes of Megadeth, Steven Wilson and Steve Vai performing in the previous editions, music lovers were expecting a major headliner this year too. The wait was finally over when the organizers declared that the Finnish Alt Rock band ‘Poets of the Fall’, who are on-tour with their eighth studio album Ultraviolet, will be the headlining act along with guitar virtuoso Guthrie Govan, Mohini Dey and Gino Banks, and Israeli psychedelic post-rock act Tiny Fingers. 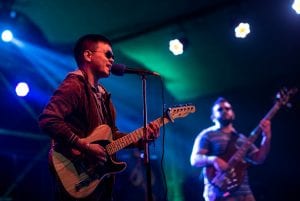 Although not at par with the previous headlining acts, ‘Poets of the Fall’ has a huge fan following in the Northeast and watching them perform live was a surreal dream for many. The fervour of the crowd was boosted with the presence of some of India’s most popular acts like Dualist Inquiry, Scribe, Kumail (Live) and Sandunes Live, acoustic folk jam band Fiddler's Green, singer-songwriter Mahesh Raghunandan, fusion act Shadow and Light, and vocalists Abhilash Choudhury and Aditi Ramesh. And much to the delight of music lovers from Assam, the fourth edition of Weekender also had a special set performed by Zubeen Garg as a tribute to the legendary bard Bhupen Hazarika.

The second day of the happiest music festival’s headlining acts included the highly anticipated alternative rock band Switchfoot with fans coming from all over the country to watch them perform a power-packed set. This was also the second time Bollywood music composer and performer Shankar Mahadevan played at the festival with his music collective - My Country, My Music, with the audience calling for an encore when he finished. 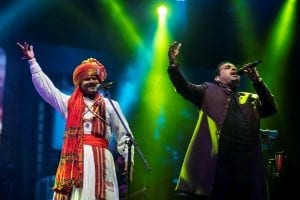 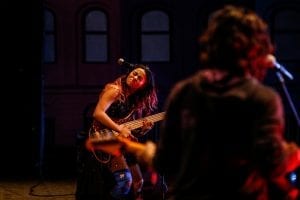 With regards to local acts, the 4th Nh7 Weekender also hosted some of the most vibrant acts like Tipriti Kharbangar and the Clansmen, Summersalt, adL x k.ly & The Other Soul Collective from Meghalaya, The Pirates from Assam, The Twin Effect and Avancer from Nagaland and The Vinyl Records from Arunachal Pradesh, Dewdrops, Dossers Urge, Sky Level (both from Meghalaya), Rain in Sahara (Assam) and the Takar Nabam Trio (Arunachal Pradesh).

The Discovery of a New Festival Venue

The NH7 Weekdender has led to the discovery of a new venue for live music festivals in the form of Thadlaskein, Lad Mukhla of Jaintia Hills. ‘Thadlaskein’, a small village located in Jaintia Hills, Meghalaya hosted this year’s edition of the festival as it has done in the last editio. Located around 150 kms from Guwahati and 50 kms from Shillong, it provided the perfect ambience for hosting a music festival. Reaching the spot was in itself a delight. Impeccable road condition, brilliant picturesque and access to delicious local cuisine, made the 4 hours journey from Guwahati to Thadlaskein a memorable one. The actual venue was surrounded by pine forests and a number of campsites accommodating the festival goers. The campsites too had their own after-event acoustic set performances. 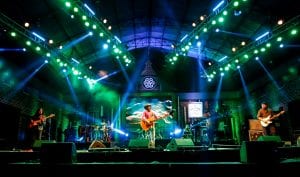 The festival grounds also included a vibrant Bazaar with shops displaying and selling fashion accessories and local finds. Food stalls catered to various tastes and were a great way to check out a lot of local cuisine, especially for fans travelling from outside the region. Before the first day’s music festival began, Thar owners enjoyed an offroading session at a special Thar Adventure Zone created just outside the festival venue. The setting of the festival, the proximity to the Thadlaskein Lake and the hilly region made it a fantastic day to remember with fans clamouring for the second day of the festival.

The Coming Together of the Legends

Although music lovers of the Northeast who had earlier witnessed stellar performances by Steve Vai, the Rudy Wallang Guitar Jamboree and Warren Mendosa in previous editions were left a tad disappointed with the line-up this year, the performance of Poets of the Fall and Guthrie Govan helped raise the anticipation levels of the regular festival goers. Although known for just one hit single, the presence of Finish band Poets of the Fall was the saving grace of the festival. Poets of the Fall, who played their first ever show in the Northeast, was given a rousing reception by fans who had made their way from different nooks and crannies of the region for this special performance.

Celebrated vocalist Tipriti Kharbangar of Soulmate, who is known for her mesmerising voice, brought a special music set to the festival, Tipriti Kharbangar and the Clansmen. And just like she does every time, her collective mesmerised all those present at the venue. Mohini Dey, who is fast making her mark as a virtuoso guitarist, also collaborated with master guitarist Guthrie Govan for an enthralling performance. 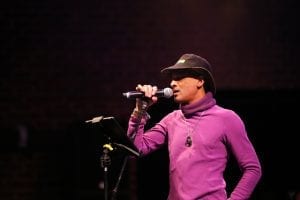 Assamese rockstar Zubeen Garg who has a huge fan following across Assam and Bengal is known for his rebellious nature and has often been caught in the midst of a number of controversies. However, Zubeen Garg is a name which is controversial but at the same time, a name and a voice which is impossible to ignore. And it is perhaps for this very reason that the organisers were compelled to include a special performance by this legendary rockstar from Assam.

Zubeen, who performed a special tribute to Bhupen Hazarika, proved to be one of the chief highlights of the festival. In his typical “Zubeen” style, the Assamese heartthrob left all visitors to the festival mesmerised with his performance. In a highly spirited performance, Zubeen and his band members shone with the brilliance for which he has earned such a huge fan following in the country.

As a fan from Assam Amarjit Baruah told The Sentinel, “I have been coming to Weekender for the past two years and it was a really memorable occasion to see Zubeen da performing a special tribute to Bhupen Hazarika. His performance was impeccable and his rendition of his popular number ‘Ya Ali’ left everyone enthralled.”

Stars Galore: Music for every Mood

Besides these legends, the festival also witnessed performances by some of the biggest names of the music industry. A number of celebrated artists, spanning across musical genres and age, travelled across the breadth and width of the country to perform for the music lovers of the region. 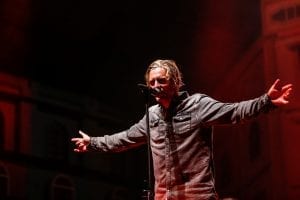 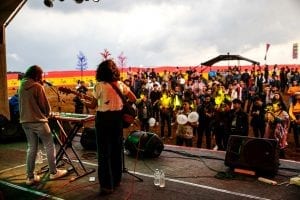 Several home-grown artists from the Northeast also performed at the event and their performance too met with an enthusiastic reception. Summersalt, a Khasi folk fusion band from Meghalaya, was one of the main attractions in the first day of the festival. A beautiful conglomeration of traditional Khasi musicians with rock, Summersalt left the festival goers grooving for more.

Talking exclusively with The Sentinel after their performance, Kit Shangpliang (the frontman of the Summersalt), said, “The NH7 Weekender is not no doubt the queen of all gigs, from being up there on stage to having full access backstage and interfacing with the best from the industry... it is perhaps, a coveted opportunity. This was our third NH7 experience but this time was special because we could connect again with our friend Shankar Mahadevan. We've worked with him in the studios but being with him on stage was experientially electric.”

The Festival is here to Stay 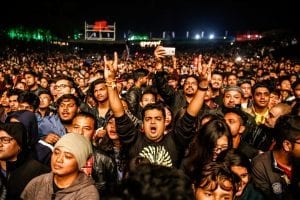 Last year, the OML group had decided to make Meghalaya a regular destination in the Weekender calendar. Talking with The Sentinel last year, Vijay Nair, CEO of OML Entertainment had said, “Every year, fans from the Northeast justify our decision to set up a festival in Meghalaya.

And to justify Nair’s statement made last year, this year’s festival director Supreet Kaur said, “The 2018 Meghalaya edition of Weekender is the most successful edition we have had in our four years here. The love and support that we have been welcomed with has truly made us feel at home. We look forward to being back next year for another fantastic experience in such a beautiful part of the country.”

Only Much Louder (OML) is a versatile and wide-ranging media and entertainment firm based in Mumbai which produces and promotes some of India's biggest entertainment properties, cutting-edge content and experiences for fans and consumers. With over a decade's experience in live events, artist management, digital and television properties, OML has been an integral part of the burgeoning music, comedy and alternative culture scene in the country. The BACARDÍ NH7 Weekender (described by The Guardian as "India's answer to Glastonbury") is one of India’s most exciting live properties.

The Emergence of a New Home-grown Production House 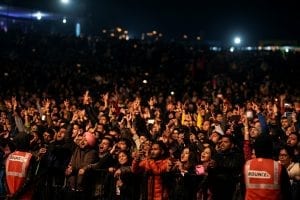 Many fans might not know but Guwahati-based events management company Aucto Creation has been handling the production of the Meghalaya edition of Weekender since the past 4 years. Sprawling across an area of approximately 14 acres, the entire terrain on Jaintia Hills near Jowai, was levelled and reconstructed by Aucto Creations over a period of three months in 2017 to convert it into a functional festival environment.

The same venue has undergone some repairs for damages made by rain this year, and refurbishing of the existing roads for this year’s festival was done on a war footing.

Speaking about their experience on building of the site, Manish Chandani, Production Head, BACARDÍ NH7 Weekender, said, “To say that the Meghalaya site built in 2017 was by far the most challenging and the longest production project I have worked on, is an understatement. But standing on the Jaintia Hills looking out over the Festival, as the moon rose over the horizon and the stages sprung to life – it was by far the most rewarding. Our biggest challenge throughout the three-month build was retaining the inherent beauty of the site, while turning it into a functional festival environment, with all the amenities, to make it suitable, safe, and breathtaking for our festival goers. I think we achieved that. We built close to 10 kms of access roads from scratch, and who knew we could learn so much about the behaviour of rain water along the way!” 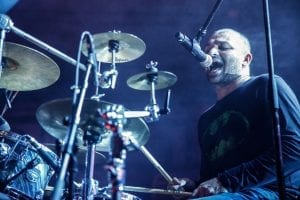 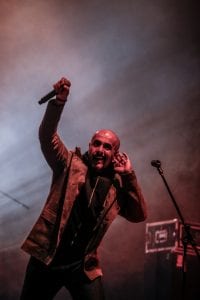 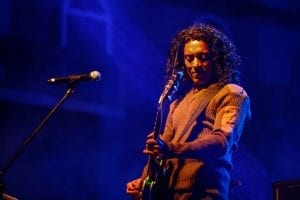 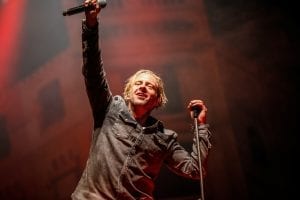 Around 125 people were a part of this mammoth production. During the three-month-long project, the production team constructed and repaired approximately 10kms of access and peripheral roads to and around the venue, levelled approximately 10,000 sq feet of land, adding up to 8 layers of sand, stones and wood in some places. The team also transplanted around 50,000 sq feet of grass.