The Spirit and Flavours of Magh Bihu

The Spirit and Flavours of Magh

We have entered a brand new year as per the Gregorian Calendar and just as we thought that the festive season is about to end, the people of Assam are gearing up for one of the most loved Bihus of the year – Magh Bihu, that is. Magh Bihu, also known as Bhogali Bihu, is typically a harvest festival and marks the end of the harvesting season. The granaries of people in villages are filled with last year’s harvest and the people rejoice by feasting with their family and loved ones. Magh Bihu is the Assamese version of Sakranti, which is marked by week-long feasting and celebrations.

Bhogali Bihu or ‘Poy Me-Ji’ as called by the Tai Ahoms comes from the word ‘Bhog’ that is eating and enjoyment. It is an Assamese festival celebrated alongside the traditional Tai Ahom festival ‘Poy Me-Ji’ which means worshiping the store house. It is basically a harvest festival and marks the end of the harvesting season. On the eve of the day called Uruka, i.e., the last day of ‘Pausa’, menfolk, more particularly young men, go to the fields, preferably near a river, build a makeshift cottage called ‘Bhelaghar’ with the hay of the harvest fields and the bonfire or Meji, the most important thing for the night. 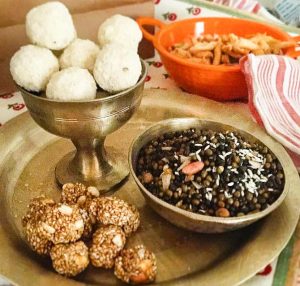 During the night, they prepare food and there is community feasting everywhere. There is also exchange of sweets and greetings at this time. The entire night (called Uruka) is spent around a ‘Meji’ with people singing Bihu songs, beating Dhol, a typical kind of drums or playing games. Boys roam about in the dark stealing firewood and vegetables for fun. The next morning they take a bath and burn the main ‘Meji’. People gather around the ‘Meji’ and throw ‘Pithas’ (rice cakes), offer ‘Nam Lao’ (traditional Tai Ahom rice wine) to ancestors, and betel nuts to it while burning it at the same time. They offer their prayers to the god of fire and mark the end of the harvesting year. Thereafter they come back home carrying pieces of half burnt firewood for being thrown among fruit trees for favourable results. All the trees in the compound are tied to bamboo strips or paddy stems.

The Fire Symbolism in the Meji

When and how the lighting of the Meji as a marker for Magh Bihu celebrations is not closely known, but we know that this bonfire culture is closely linked to fertility rites, nature and fire worship. Fire was an essential element because it was closely linked to the pagan belief system as well as to the Vedic concept of Agni, the god of sacrificial fire. Also fire is symbolic of annihilation and regeneration, symbolic of light, warmth and positivity, which puts an end to the cold and the dark, and the Meji perfectly connotes that.

A Festival of Feasting and Enjoyment

Unlike the other Bihus, Magh Bihu is marked by a lot of feasting and rejoicing over sumptuous meals. Bhogali or Magh Bihu is indeed a festival of fasting and feasting. In many places, people fast on the day before Uruka (the first day of Bhogali Bihu). For the next two days—there is a succession of feasting and merry making. In the greater Assamese consciousness, Bhogali Bihu is associated with the pounding of dheki , the buzz of activities in the household, the aroma of fried and baked delicacies, the frequent trips to the bazaar — and most importantly, the community feast on Uruka and the Meji or the Bhelaghar. Today however most of these experiences linger more in our memories and in the aromas that waft the air...

In those days of our childhood and youth, Bhogali Bihu had meant a flurry of activity in every household. It was a time, when an entire locality would get together to shop, cook, and eat as one family. Bhogali Bihu in fact reminds us at once of the Urukar Bhoj i.e. the community feast on Uruka. The morning after, people would gather around the Meji to make offerings of ‘til’ (sesame), rice and other eatables to ‘Agni’-the God of fire. Also, ashes of the burnt mejis would be scattered over the fields; for it was believed to increase the fertility of the soil. These traditions are sadly, dying a slow death.

Although the flurry of activity associated with Bihu is there even today (yet) the contours have changed. With increasing urbanization and consequently, sparse land space, the bhelaghar or the meji are almost passé. Buffalo fights, egg fights and other traditional entertainments are virtually unknown to the new age Asomiya. With a plethora of malls and shopping arcades, and easy availability of most commodities, the dheki and the taat xaal (loom) have but vanished from people’s homes.

Bihu today is a season of shopping for the latest designer tees and kurtis. From the pithas to the laddoos to most other delicacies that we offer our guests during Bhogali Bihu come straight from the supermarket next door. Our children, today show greater inclination towards the pastry than the pitha. With the so-called fast life invading our socio-domestic spheres, people are isolated like never before. Though people do get together for a meal beside a warm fire in farmhouses and open fields, (sadly) these often deteriorate into one and another form of alcohol-drenched late-night parties. In view of all this, Bhogali Bihu today is generally deemed to be a shadow of its past.

A Competition for the Biggest Catch

As we move into the Y2K age with the internet and social media taking centre-stage in our lives, Bhogali Bihu has also become an occasion for displaying the might of every individual household’s celebrations. In Guwahati city alone, newspapers and television channels remain abuzz with photographs and video clippings of people displaying the biggest fish or chicken that they could catch from the banks of the Brahmaputra.

Gone are the days when womenfolk would toil over their earthen stoves trying to bake the famed pithas and ladoos. The sound of the pounding of the dheki has been replaced with frequent trips to roadside vendors and supermarkets which sell our traditional Assamese delicacies in beautifully packed boxes. While factory-made pithas and ladoos can never replace the home-caked flavours of these traditional Assamese delicacies, it is heartening to know that the new generation are atleast trying to keep the spirit of this occasion alive despite the hectic lifestyles today.

In today’s digital world, selfies with the biggest fishes available in the market have become the order of the day. While the blatant display of personal resources is abhorred by many, it does provide a lot of happiness and adds to the spirit of festivity and enjoyment prevailing in the air during this time of the year. 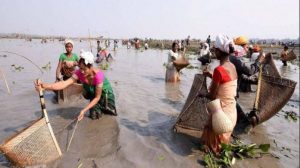 The biggest strength of the Assamese community is that its national festival Bihu is not a religious but an essentially agricultural festival that has the entire Assamese community participating in it—irrespective of religious, ethnic, caste and linguistic identities. On the night of uruka all kinds of barriers are wiped out when men eat out of the same pan. This community feast is in itself a symbol of unity; it stands for the brotherhood and harmony that continual ethnic strife has eroded considerably from the composite Assamese society. On the day of the Bihu, people visit one another’s families offering good wishes and seeking blessings from elders. In our isolated modern lives, such opportunities help us to mend and forge bridges between hearts. The fire of the Meji purifies and purges all vices.

The essence and spirit of Bhogali Bihu is all the more relevant today taking into consideration the present socio-political situation in the country, and in the State of Assam. With many people questioning the very validity of the concept of a greater Assamese society, Magh Bihu is the perfect occasion to remind people of the bonds that bind us all together.

So as we enter into another English New Year protesting against the Citizenship Ammendment Bill and numerous other political issues, let us all celebrate Bhogali Bihu with the hope that this festive season binds us all together as a composite Assamese society, and help us thwart all evil designs that are seeking to destroy our rich secular fabric. Let this Magh Bihu be an occasion to remind us all that we are all bound together with age-old cultural and historical ties that can never be eroded by forces that seek to disrupt our age-old communal harmony and peace. Let this Magh Bihu be a reminder our of our glorious history as a greater Assamese society.

The entire mélange team wishes its readers a very happy Magh Bihu. May the spirit of Bhogali Bihu guide us all for better days to come. Happy Feasting till then!