Planning a holiday during summer has been an eagerly awaited activity for a travel enthusiast like me. A pocket-friendly and fun trip is also what I always look out for. Keeping these priorities in mind, we zeroed in on Cambodia which already was in my bucket list. Our holiday was scheduled during the first week of July, 2019 and tickets, hotels, etc. were booked well in advance.

Our flight to Malaysia took off from Kolkata at midnight of 3rd July. We arrived at the Kuala Lumpur International Airport early next morning and after a layover of nearly 3 hours, we boarded our next flight to Phnom Pehn. After 1 and half hours, we landed at Phnom Pehn International airport. It was a sultry summer day in the Cambodian capital and luckily our airport pick up soon brought us to our hotel which was centrally located. We received a warm welcome from the staff and were greeted with cool complimentary drinks at the lobby.

Usually, when one mentions Cambodia, the first thing that comes to mind is the Khmer Rouge regime which controlled the country for 5 years in the mid 1970s and implemented radical communist ideologies over the masses. However, leaving that dark phase of history behind, Cambodia has much to offer to travelers. There is a wide kaleidoscope of tourist destinations and a minimum of 2 weeks is required if one wants to properly explore the exotic locations. Since our time was limited, we had to make do with a 7 day trip. Hence, we selected only two places – Phnom Pehn and Siem Reap in our itinerary. Covering as much as possible within this short period was challenging. Some research helped in planning the spots we wanted to explore. 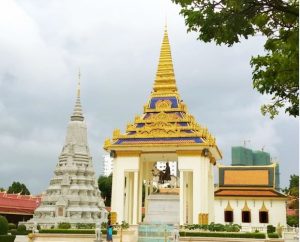 Phnom Pehn: The busy capital city of Cambodia is situated at the junction of the Mekong and Tonle Sap rivers. This city was a hub of both the Khmer empire and the French colonists. With its walkable riverfront lined with parks, cafes, bars, night market, etc. Phnom Pehn never fails to allure tourists from across the globe. Since we had the evening free on the day of our arrival, we were advised to take the sunset cruise on the Mekong which is one of the high points of the city. We were picked up from the hotel by a vehicle of the cruise boat firm and soon we reached Sisowath Quay. The river front looked a perfect place to hang out and people thronged the wide boulevards off the river which were lined with benches and palm trees. Our cruise began around 5.30 pm. Besides me and my husband, there were only three more passengers on the boat. As we glided over the Mekong, the myriad views of the city came in sight. The Mekong is the 12th largest river in the world. It feeds the Tonle Sap River which in turn feeds the great Tonle Sap Lake. Besides enjoying the wonderful surroundings, we relished the BBQ snacks and drinks served on board! We passed by numerous fishing boats and also got a glimpse of the homes of fishing community on the bank of the river in the city’s periphery. The squalor was a reflection of the poverty of this class of people. As the city lights came up, it created a different scene. The glitter of the skyline was indeed magical. The one and a half hour cruise ended too quickly and we were happy to spend the first evening in Cambodia in a relaxed manner.

Day 2 in Phnom Pehn was reserved for the city tour. Our hotel arranged a tuktuk to take us around the landmarks. I noticed that life in the capital city starts early and all official establishments, museums and even some shopping centers open their gates by 7 in the morning. Our first stop was the Tuol Sleng Genocide Museum. Tuol Sleng (also known as S21) was a secret center of a network of 200 prisons where people were tortured by the notorious Khmer Rouge. Nearly 20,000 people were imprisoned in S21 and there are only twelve confirmed survivors. The audio guides provided at the entrance brought alive the horrors that once occurred within the premises of Tuol Sleng.

Next we drove to the outskirts of Phnom Pehn, about 15 km south, to another museum and memorial site. This was the Choeung Ek Genocidal Center, better known as the Killing Fields of Cambodia. Inside the complex, there was a museum which showcased the history of the Khmer Rouge and its leaders. There was also a short documentary film show for the visitors. A number of mass graves were spread over the area and the place is a living example of the cruel reign of Khmer Rouge. A beautifully constructed Memorial Stupa stands at the centre of the complex where the remains of the victims are reverently preserved inside large glass cases. As a mark of respect for the victims, visitors are requested to dress modestly, remain silent and refrain from smoking inside the premises of the Killing Fields.

We headed back to the city and stopped at the famous Russian market or the Tuol Tompoung market where vendors sell a wide array of souvenirs and discounted name brand clothes besides food items. I picked up few gifts at good bargain and proceeded to our 4th stop, the Royal Palace.

The richly ornamented 1866 palace complex is the home to Cambodian kings and it is a perfect example of Khmer architecture. The premises house a complex of buildings which serves as the royal residence of the king of Cambodia. The palace was built after King Norodom relocated the capital from Oudong to Phnom Pehn after the implementation of the French Protectorate in Cambodia in 1863. It is built atop an old citadel, Banteay Kev. The royal complex is divided by walls into four main compounds. On the southern side stands the Silver Pagoda and to the north lies the Khemarin Palace. The central compound contains the Throne Hall and to the west lies the private sector (Inner Court). Although the architecture is purely Khmer, there is a slight French touch featuring its layout of the defensive wall, throne hall, stupas, towering spires and mural paintings. The palace complex has beautiful manicured gardens with tropical flowers and plants. The king’s living quarters which covers half of the total palace area is closed for public.

Next we headed to the Wat Phnom Historical Site. It is an artificial hill, built in 1373 and is the highest Buddhist edifice in Phnom Pehn. A flight of steps leads to a beautiful Buddha shrine with a tall golden statue and other relics. The columns, walls and roof of the temple have colorful murals depicting scenes from Buddha’s life. Devotees placed candles, flowers and incense sticks to offer prayers and we could feel the deep religious significance of the place.

Our penultimate stop was the National Museum which is Cambodia’s largest museum of cultural history. Although it was almost closing time when we reached yet we made a quick round of the main exhibits. The museum was established in the 1920s and the buildings are inspired by Khmer temple architecture. The collection includes over 14,000 items. A stone Ganesha in the courtyard caught my attention as soon as we entered. Some interesting exhibits on display include the reclining Vishnu made from bronze (11th century); the sandstone Garuda (10th century); the Trimurti, made of sandstone (11th century), a Lingam from Angkor period made of bronze, silver and quartz, etc. The museum also serves a religious function with its collection of important Buddhist and Hindu sculpture. Our final stop was the popular Phnom Pehn Night Market which was located in Sisowath Quay. The night market is a bustling place that comes to life after dusk. Shops selling clothes, souvenirs, accessories and local crafts line up on both sides of the big open space. There is an open air sound stage in the centre of the market providing live entertainment. This place is also a foodie’s delight with street food stalls occupying a large part of the area. Those with an adventurous palate can try numerous local delicacies here. The coconut ice-cream served in coconut shells is quite popular with the visitors. We wrapped up our day with hot noodles soup cooked in Khmer style before returning to our hotel.

Day 3 was spent mostly exploring the famed Central Market (Phsar Thmei). This large market was built in 1937 in the shape of a dome with four arms branching out into huge hallways with numerous stalls of goods. After its inauguration, this market was labeled as Asia’s biggest market! The unique Art Deco building is a landmark of the capital city. The market stocks everything from food items to clothes, silverware and jewelry. It is in fact one of the busy bazaars that are always full of a motley crowd from one end to the other. One needs easily 4-5 hours to explore Central Market thoroughly. During the evening, we visited another shopping centre, the Sorya Mall, which had shops selling local handmade art and craft, variety of Cambodian wine and beer. There were also a wide range of sticky rice, pepper and other locally grown spices to choose from. The food court appropriately named, Flavors of Cambodia, provided the Khmer cuisine catering to everyone’s taste. A platter of garlic rice and stir fried shredded chicken served with a clear broth ended our third day in the Cambodian capital.