In the art scenario of Assam and the Northeast, Kishore Kumar Das is a prominent name which does not need much intoduction. One of the foremost exponents of satirical and conceptual art in the Northeast, he was the first artist from the Brahmaputra valley to be bestowed with the prestigious Lalit Kala Akademi Award – the highest honour for artists by the Indian government.

An artist who has constantly strived to portray burning and social and political issues through his art, Kishore Kumar Das has also been working steadfastly for the promotion and propagation of art in the region. As secretary of the Guwahati Artists Guild, he has played a vital and instrumental role in the development of the premier art institution into a centre of excellence and a highly vibrant cultural arena which facilitates networking among artist from diverse fields. 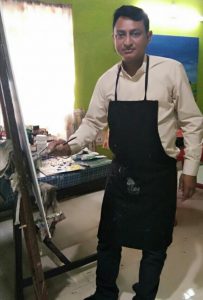 A Masters degree holder from the famed MS Institute of Fine Arts, Baroda, Kishore Kumar Das’s art works are highly conceptual in nature and are based on socially relevant issues. Talking about Kishore Kumar Das’s art works, noted art critic and littérateur Rupanjali Baruah had rightly opined, “Kishore Kumar Das explores through his artwork the balance between socio-political commentary and satire. Drawing inspiration from his social milieu, he poses realistic postures of real people interacting with exaggerated situations, and challenges to see themselves in relationship with life-situations and thereby searches for satire in every detailed observation. He sees people in various encounters that trigger contemplation and participation in the viewer. He builds his images like a conceptual grid, layer upon layer, to make his tacit comments on myriad issues. The very thing that makes his art stand out is that they impact with a message, boldly loud and clear. Though each image is a complex play of ideas with multiple layered thoughts both in terms of image and context, Kishor Kumar Das makes use of his own intuitive senses and its relevance that result in gritty, emotive and no nonsense display of human conditions. There is the underlying universality of his message that makes his comments on the follies of today affect all sensibilities with quick, economical precision. His graphic details of satire are like an arsenal to hit human consciousness.”

Presently working as a senior lecturer in DIET, Morigaon, Das has constantly strived to promote and develop the art scenario of the State and the northeastern region. Besides being the general secretary of the Gauhati Artists Guild and the president of the Association of Visual Artists of Assam, he is also involved with a host of prestigious bodies in various capacities. He is a member of the Expert Committee of Dr. Bhupen Hazarika’s memorial, Selection Committee Member of the Government of Assam, Expert Committee Member of the Nabin Chandra Bordoloi Memorial Hall, Government of Assam, Organizing Secretary of the Rishi Kapil Khaund Memoria Trust, State Member of NEZCC, Ministry of Cutures, besides others.

Besides winning the 47th National Academy Award from Lalit Kala Akademi, he was also honoured with the All Assam RangTulika Award in 2010 at Morigaon. The mélange team recently entered into a conversation with the artist to know more about his life and his journey in the realm of art. Following are excerpts.

Ans: I was born in Barpeta but grew up in Guwahati so apart from being the place where I was born, I don’t have much memories in Barpeta. My father worked in the State Employment Exchange and he was posted in Shillong and Guwahati where I grew up along with my five elder sisters and one younger sister. I did my primary schooling in Nizarapar Prathamik Vidyalaya and matriculated from Kamrup Academy in 1987. After completing my higher secondary course from B Barooah College of Guwahati, I joined the MS University in Baroda from where I completed my Masters Degree in Fine Arts. I stayed for a short while in Mumbai before coming back to Guwahati. I joined the government service soon after I came back and am presently working as a Senior Lecturer in the District Education and Training (DIET) centre in Morigaon. 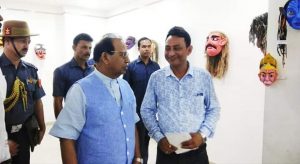 Ans: Yes, I guess my interest in arts began when I was in school itself. When I was in school, the Assam Agitation had started and schools were closed because of the historic movement. During this period, I started spending my time in painting. I was lucky to receive tutelage from Humarnab Bora and late Dhruba Deka, who was a former president of the Guwahati Artists Guild. Under their tutelage, I developed a strong interest in arts and made up my mind to pursue a course in either Shantineketan or Baroda after completing my HS exam.

When I first went to Baroda, the art scenario had not developed much in Assam. Baroda is the nodal centre in the country for artists and students to get acquainted the latest trends in art and appreciate new artistic treatments. It would not be wrong to say that Baroda is the only place in India which acquaints artists in the realm of international art trends. During my long course in Baroda, I came across many versatile artists and staying in their acquaintance helped me develop my own individual style. I was fortunate to find very new concepts in Baroda and the same are reflected in my works. My art works don’t have many takers in India as they are very conceptual and abstract in nature. My paintings have been sold mostly outside.

But despite being introduced to the best of artists in Baroda, I had resolved there itself, in my own mind, to come back and revive the art industry of Assam.

Ans: As you know, I am the only boy among my siblings and my parents wanted me to get into a profession which would help me to support the family later on. So when I announced that I wanted to study art, they did object because there were not many opportunities in Art at that point in Assam and my parents wanted me to study a conventional subject like Science so that I can become a doctor or engineer. However, they agreed in the end and I am thankful that I stuck to my decision.

Ans: My father Lakhikanta Das worked in the employment exchange and retired from government service. After his retirement, he spends his time writing and has written a number of books, mostly on spiritual discourses. My mother Purnima Das is a housewife while my wife Mitali Bharali is a poet.

Ans: After I came back from Baroda in the nineties, I got the chance to become the general secretary of Gauhati Artist Guild. However, that was not a fruitful tenure as I was myself struggling to make my place here. I resigned from the post within 10 months.

Much later on, in around 2009, I became aware of need for an institution which can be a melting point for cultural practitioners. I got the opportunity once again to become secretary of the Gauhati Artist Guild. At that time, the guild was functioning from a thatched house and my first agenda was to develop it into a modern state-of-the-art complex. We didn’t have funds in the guild but we started the construction process. I also started formulating a strategy to build a full-fledged cultural complex and brought all creative professionals – be it writers, artists, filmmakers, etc. together in the Artists guild. Then we started approaching the corporate sector and the public agencies to support the guild and finally the cultural complex of Gauhati Artists Guild became a reality.

My next step was to focus the limelight to artists who are working not only in Assam but also in other districts of the State. With this thought in mind, we started an annual exhibition in different districts of Assam to spread awareness and bring unknown artists to the limelight. We also started the Tarun Duwarah Memorial Art Award during my tenure and that was a big achievement for the entire guild.

In 2009, we gave birth to All Assam Visual Artists Association to address the burning issues faced by artists of Assam. We have long been demanding a regional centre of art in Guwahati which would help a lot of artists in Assam. We have also been placing a demand for a master degree courses in Art in Assam and for more teachers in our art schools and colleges. However, we have not received much support from the government in this regard. Finally, I recently met the President through the Governor to place our demands and he was kind enough to listen to us with patient years. I don’t know what the future holds but I have been fortunate to receive the support of most of the artists of Assam.

But despite all this small hindrances, I am happy that there has been at least a little bit of development in the art scenario of Assam and the Northeast over the past couple of decades. However, at the same time, my active participation in all these activities has also hampered my own creative process to a large extent.

Ans: in 2004, my elder sister passed away after a few years of her marriage. She was involved in knitting and tailoring and had a self employed business of her own. I was very disturbed after her demise and could not concentrate in my work for around six months. The one night, I developed an urge to make a painting with a sewing machine as the subject. I completed the painting in one night without any brushes as such and it was a simple outburst of emotions. I had sent the painting, title The Creator, to the Northeast Art Exhibition held by Kalakshetra. The panting was not selected in the exhibition. During that time, I received the news that the Lalit Kala Akademi was inviting applications for their national exhibition and I sent my painting for the same. After a few days, I got the news that my painting was selected for the exhibition. Since it was a big exhibition, I was happy that my painting was selected from thousands of entries and though that it was the end of the story.

It was much later on that I learnt that I had won the award. Till that time, I had not realized that no one from Brahmaputra Valley had won the Award before me. It was only much later that I came to know that someone from Barak Valley had received the award. It was only when I went to receive the award that I realized the enormity of what I had achieved. I still remember the words of Nilomani Phukan who had opined that I had opened the doors of Assam to the art world by winning the award.