We May Not Be Alone In The Universe

Can the human mind imagine something just out of the blue? Any imagination, however wild, has to have some basis, some fundamentals. However once the process of imagination starts it may cross any barrier to grow to become even something outlandish. Nevertheless, it needs a starting point, something seen, heard, read, told or felt. A dream can be funny or distorted, but one cannot dream something similar that’s not available in this world. Man imagined flying seeing birds and went on to invent airplanes and spacecrafts. Newton coined the theory of gravity by observing a falling apple and so on. Any scientific invention or discovery started with some basics. That precisely is the logic behind the theory of the Paleo Contact. Paleo Contact theorizes that, intelligent extraterrestrial beings sometimes referred to as ancient astronauts, visited earth in the distant past and heavily influenced human culture, technology and religion. Otherwise many bizarre things in the world remain unexplained! 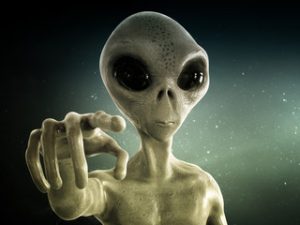 The Hindu, Greek, Mayan or many other mythologies tell about heaven somewhere up and above the clouds; that gods frequented the earth from there flying in some spacecrafts that created noise and a halo around. Was it possible for a stone-age man with underdeveloped brains and very limited faculty to imagine such happenings without actually seeing those? It indeed is a million dollar question! The Paleo contact theory questions exactly that: did some aliens visit the earth from the sky beyond the clouds in spacecrafts and went away? Is God actually an ancient astronaut? It is possible that the cave age man couldn’t record such happenings as writing skill was not developed then. But many discovered figurines in cave paintings depict images that wore better clothing and carried much improved weapons and tools. It couldn’t have been just wild imagination without any basis.

In his book “The Spaceships of Ezekiel”, Josef Blumirch tells about biblical prophet Ezekiel’s several encounters with ancient astronauts in a spacecraft from another planet. The story tells about a spacecraft wheel that can move forward, backward and also sideways. (This concept is now patented as ‘Omni Wheel’, used in many special applications.) The story of Moses in ‘The Book of Exodus’ tells about somewhere in Mount Sinai amidst thick cloud and darkness God instructed him to create the ‘Ark of Covenant’, a golden chest, to hold two stone tablets with inscriptions of the ‘Ten Commandments’. Ravana in his flying machine, ‘Pushpaka’, flew in and out of Lanka crossing the Pak strait at ease. Missile like weapons were used in the battle of Kurukhetra. The world mythology is full of such stories. 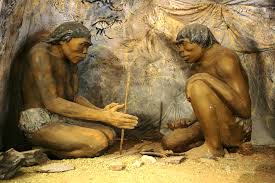 The homo-sapiens appeared on earth as a result of process of evolution some 200 thousand years ago and after crossing many stages became the modern man. During the later part of the Upper Paleolithic (Stone Age) period, some 40 thousand years ago and after, man still used stone tools, lived in communities in caves and huts and worn basic clothing. But at the cross over period of Paleolithic and Mesolithic stages, about 5000 to 10,000 BC, many megalithic structures/ monuments were built in many parts of the earth. Pyramids of Giza and Cheops in Egypt and the ruins of Puma Punku, Machu Picchu etc. were built during the period. Beautifully machine-cut huge stone blocks weighing up to 1200 tons with drilled holes were used in these structures. How the uncivilized man who hardly learnt to build huts could erect such gigantic structures using only stone tools ? And why after a few thousand years man seems to have lost the knowledge? Why this kind of technology got used throughout the world for a limited period almost at the same time? Incidentally, the structures built much after that period are actually cruder and unsophisticated.

Following the cues, a controversial Swiss hotelier Erich von Daniken appeared on the scene in 1968 with his sensational book, “Chariots of the Gods?” The theories and views propagated in the book not only created a sensational storm but shaken the basic foundations of many scientific, archaeological theories and religious beliefs. He raised questions like: Was God actually an ancient astronaut? Do centuries old legends of gods and heroes tell of space travelers coming to earth from the cosmos? Are some ruins of antiquity remnants of air fields were favored landing space for extraterrestrial crafts? And so on. He not only raised questions but tried to give some apparently convincing and matching examples too, like the iron pillar erected by Chandragupta-II the great in Delhi is not yet rusted. Is it because of the use of some superior alien technology? Why some drawings of the Mayan time depict figures resembling men wearing space-suits with a miner’s lamp like thing in the head gear? And, many more similar examples were cited.

However the ideas of Daniken were almost instantly rejected by majority of the scientists and academics who categorized his work as pseudo-history, pseudo-archaeology and pseudo-science. Some even condemned him as a charlatan or quack. But this did not deter Daniken and he went on to write some 26 bestselling books on the subject. His books were translated into 32 languages and over 63 million copies were sold. True, Daniken’s claims have not scientifically and conclusively been proven, but that does not mean that these merit no consideration at all. Daniken however is silent on why such space travelers have stopped visiting us. To echo Daniken’s words: “Everybody will join me there (after death) eventually and at least they will know then that I was right.” Till such time let’s keep our fingers crossed. Well, it’s comforting to imagine that we may not be alone in the universe!