Guwahati: At a time when the Delhi government and civic authorities came together for providing the basic facilities of allowing mothers to breastfeed in public places, a mall in Kolkata has raised the eye-brows by shaming a mother for breastfeeding her baby in public. Later, when this incident came into light and the matter got posted on social media by one of the witnesses, the mall faced major criticisms from people.

The incident came into light when a visitor of the Kolkata mall, South City Mall, made a post on social media narrating the whole incident and how the mall shamed the woman for breastfeeding her baby in a public place. The post is shared by a resident of Kolkata, Trisha Ghosh Moitra, who also highlighted the response of the mall that was given to the mother.

Moitra stated, "As some of you have noticed, I have posted about @southcitymall Kolkata not having basic amenities for kids i.e., baby room, feeding zone etc. which is there for any shopping mall. They are asking toilets to be used for feeding, etc. Here's the thing, would you have your food in the toilet? If not, how can you make a baby feed there?" 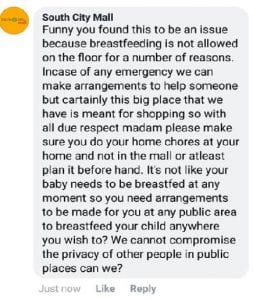 The mall also said that they cannot compromise with the privacy of the mall by allowing her to breastfeed in public. This issue created such flak over the social media that fearing a degradation of its reputation, the mall had to delete its previous post. In place of that, they posted another post which seemed more like an apology. It stated, "We had made an unconditional apology for the remark/comment made by our agency in accordance to the feedback/comment written by our valuable visitor in relate to her inconvenience for feeding the baby... We clarify that South City tries to take care of the smallest requirement a Patron would need at Mall at any time. It is our agent who without knowing the facts made such a comment in response to the feedback of our Patron and we have taken the duly required action against the same yesterday itself."