Guwahati: Bollywood star Yami Gautam who was here in Guwahati to flag off the Great Guwahati Marathon 2020 (Night Marathon) on Sunday got trolled after a video of her arriving at the Guwahati LGBI Airport went viral.

In the video, she was seen rejecting the Assamese Gamosa (Assamese scarf) which was offered to her by a fan.

Meanwhile, the actor has given a clarification for the same on Twitter, and called her reaction ‘ self-defense’.

Yami in her tweet said, “My reaction was simply self-defense. As a woman, if I am uncomfortable with anyone getting too close to me, I or any other girl has every right to express it. I Dint’ intend to hurt anyone's sentiments but it's very important to voice out a behavior, inappropriate in any manner.” 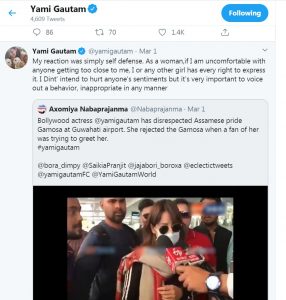 Also, praising the beautiful state of Assam, Yami tweeted, “Had a great time flagging off ‘Great Guwahati Marathon’ -2020! Was so good to see so many smiling faces & hence could feel the love! Thank you for this beautiful ‘Japi’ & ‘Gamosa’.”

She also mentioned that this was her third visit to Assam. “I have always expressed my love towards Assamese culture & people. It’s insensitive to react to a single-sided story & spread hate. I am present here, in this beautiful state for an important event & shall always keep coming back. Peace & Respect,” she ended up stating this on twitter.