* Nearly 1.5 billion people depend on the Himalayas for water, food and energy

Aizawl/Agartala: The Mizoram government has launched an awareness campaign across the State on climate change and global warming, officials said on Wednesday.

The government took action after a report stated that Assam, Mizoram and Jammu and Kashmir are among the 12 Himalayan States in India that are extremely vulnerable to global warming and climate change. The Mizoram Remote Sensing Application Centre (MIRSAC) and Deputy Commissioners of various districts are organising awareness campaigns involving government officials, NGOs, media persons, academicians, village council leaders and students, said a State Directorate of Information and Public Relations (DIPR) official. Addressing an awareness-cum-workshop in Lunglei district on Tuesday, Lunglei Deputy Commissioner K. Lalrinzuali said that India’s 12 Himalayan states, especially Assam, Mizoram and Jammu and Kashmir, are the most vulnerable to climate change.

“Himalayan communities are generally more vulnerable to climate change because they have fewer livelihood options, limited infrastructure and a high dependence on natural resources,” she said while referring to a recent study conducted by the Indian Institute of Technology-Mandi, IIT-Guwahati and Indian Institute of Science, Bengaluru. Stressing on the gravity of the present situation, Lalrinzuali told people to plant more trees, use natural resources judiciously and adopt simple eco-friendly habits in their daily routines, a DIPR statement said.

Speaking at the event, Chief Scientific Officer of Mizoram’s Directorate of Science and Technology, RK Lallianthanga, highlighted the various initiatives and projects undertaken by his department to deal with the situation arising out of climate change.

According to an official of Tripura Science, Technology and Environment Department, states having low per capita income, low area under irrigation and low area under forests per 1,000 households and high area under open forests received a high vulnerability score in the joint study.

“Assam has the least area under irrigation, least forest area available per 1,000 rural households and the second lowest per capita income among the other IHR (Indian Himalayan Region) States, and thus scores the highest vulnerability score,” the official said on condition of anonymity. Based on this assessment, the vulnerability index was found to be the highest for Assam (0.72) and Mizoram (0.71), followed by Jammu and Kashmir (0.62), Manipur (0.59), Meghalaya and West Bengal (both 0.58), Nagaland (0.57), Himachal Pradesh and Tripura (both 0.51), Arunachal Pradesh (0.47) and Uttarakhand (0.45).Sikkim is the least vulnerable state with the index being 0.42.  The Himalayas are the largest and tallest mountain range in the world, bordering five countries and covering an area of about 43 lakh sq km.  Nearly 1.5 billion people depend on the Himalayas for water, food and energy. The Himalayan ecosystem is considered as extremely fragile and diverse but vital for India. 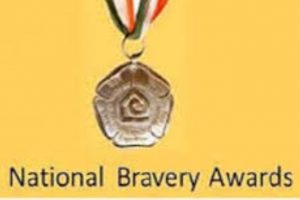 Aizawl/Shillong: Carolyn Malsawmtluangi, aged just 11, this little girl from Mizoram has become an epitome of courage and quick presence of mind by saving a...