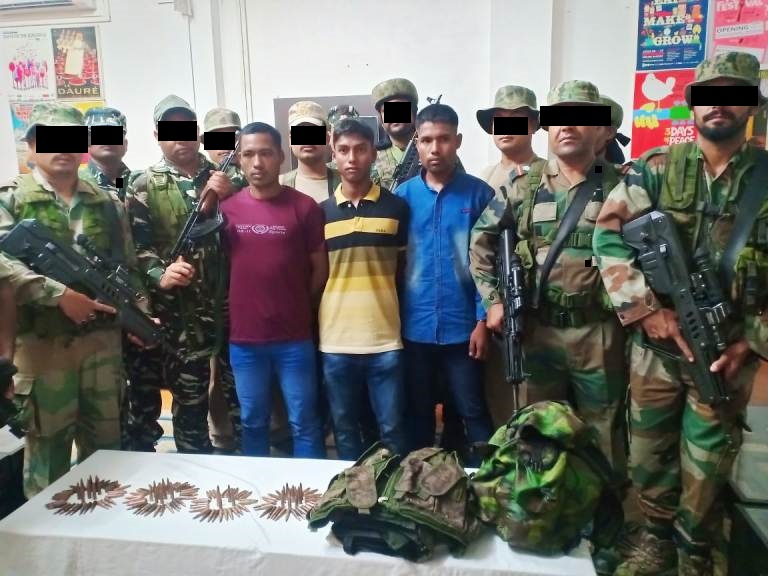 Tinsukia: Three ULFA (I) cadres surrendered in front of Security Forces (Tinsukia Police & Army) on Wednesday at Talpathar under the Bordumsa Police Station in Tinsukia District of Assam.

It may also be mentioned that following the onslaught against the militants of Northeast, the ULFA (I) rebels were reported to be in disarray and disillusioned. Earlier, Monikanta Sonowal (21) alias Adarsha Asom of Bormaithong in Tinsukia district and many more hardcore cadres managed to escape from the ULFA (I) Myanmar camp and accordingly surrendered before the security forces.

Assam Police also mentioned during a press conference that due to the intensified operation by the Myanmar Army, the rebels have been changing their camps often and whoever is getting an opportunity, is trying to flee Myanmar and surrender.

The United Liberation Front of Assam ULFA is a militant outfit operating in the Indian state of Assam. It seeks to establish an independent state of Assam with an armed struggle in the Assam conflict. The Government of India banned the organization in 1990 citing it as a terrorist organization, while the United States Department of State lists it under “other groups of concern.”

According to sources, ULFA was founded on 7 April 1979 at Rang Ghar and began operations in 1990. Sunil Nath, former Central Publicity Secretary and spokesman of ULFA have stated that the organization established ties with the Nationalist Socialist Council of Nagaland in 1983 and with the Burma based Kachin Independent Army in 1987. Military operations against the ULFA by the Indian Army began in 1990 and continue into the present. On 5 December 2009, the chairman and the deputy commander-in-chief of ULFA was taken into Indian custody. In 2011, there was a major crackdown on the ULFA in Bangladesh, which greatly assisted the government of India in bringing ULFA leaders to talks. In January 2010, ULFA softened its stance and dropped demands for independence as a condition for talks with the Government of India.

On 3 September 2011, a tripartite agreement for “Suspension of Operations” against ULFA was signed between the Indian government, the Assam government and the ULFA.