Guwahati: Renowned Bollywood producer and director Anurag Kashyap today announced that he is presenting the Assamese film "Aamis" in theatres this November.

The filmmaker made this announcement through his official Instagram handle, and made a video appeal to cinephiles to watch Aamis upon its release on November 22, saying "you have not seen anything like 'Aamis' coming out of India."

While Kashyap has been known to present independent films from across India in theatres, this is the first time he will be presenting a film from the Northeast. 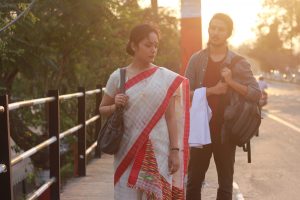 A dark love story, 'Aamis' has been written and directed by filmmaker Bhaskar Hazarika who according to Anurag is "fearless and is telling a story that is unique." Bhaskar's first film Kothanodi received the National Award in 2016.

The film stars debutants Lima Das and Arghadeep Barua, supported by Neetali Das, Sagar Saurabh and Manash K Das, and is produced by Poonam Deol and Shyam Bora in association with Wishberry Films.

The film premiered at the Tribeca Film Festival in New York earlier this year, where it was nominated in five categories, including Best Film. 'Aamis' also received two awards at the recently concluded Singapore South Asian International Film Festival - Best Director for Bhaskar Hazarika and Best Actress for Lima Das.

Writer-director Bhaskar Hazarika said, "Having Anurag Kashyap present the film is a dream come true for all of us in the team. Anurag is known for his unique and original vision, and his support for Aamis will definitely go a long way in putting the film in the public eye." 'Aamis' will be releasing in Assam and select cities of India on November 22 this year.