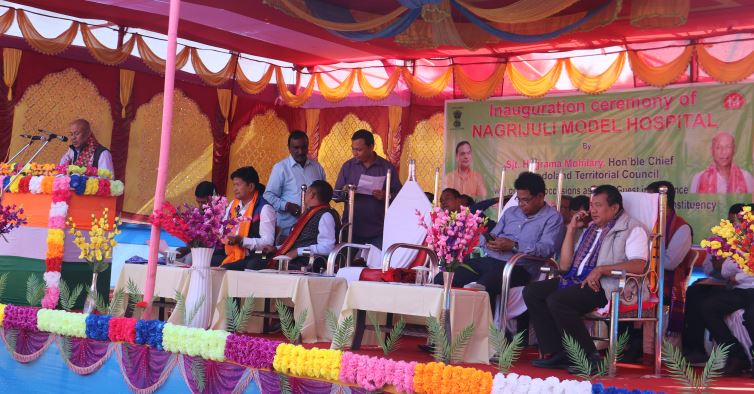 KOKRAJHAR/TAMULPUR: Bodoland Territorial Council (BTC) chief on Tuesday ceremonially inaugurated the newly-constructed Nagrijuli Model Hospital in Baksa district in presence of EMs, MLA and departmental officers. The model hospital has been built at a cost of Rs. 4.90 crore under the implementing agency of National Health Mission, Assam.

Talking to reporters, Mohilary said the CAB  problem would be resolved by the BJP-led Central Government as this government had resolved many critical issues like scrapping of Article 370 in Jammu and Kashmir, Ram Janambhumi-Babri Masjid issue in UP and triple talaq without any hurdle.

He further said,  “Some  underground groups of NDFB are also communicating for discussion with the government and so we are seeking permission from the government to discuss with those underground groups of NDFB for peace accord.’’  Criticizing the ABSU and Gobinda Basumatary of NDFB, Mohilary said that in Delhi they leave the demand of separate state of Bodoland and want to sit for discussion with the government but on returning to Assam they again start movement for separate Bodoland. Mohilary appealed to the public not to support such organizations and to extend their hands towards BPF to accelerate the development of BTC.

Mohilary said there were no facilities in the health sector in BTC region but his council had brought many changes by giving priority to the health sector. He hoped that the Model Hospital at Nagrijuli would cater to the need of the local people who had to travel a long distance for medical treatment.

Sources from the health department said the new hospital would have 30 beds with other high-tech equipment. Sources also said there would be six sub centres, 34 villages, 36 ASHA workers, 7 ANMs, one CHO, 6 SW and one MPW under the new hospital where nine doctors, six staff nurse, three ward boys and ward girls and one each pharmacist, laboratory assistant, junior assistant, dresser, night chowkidar and radiographer.