Kokrajhar: The banned outfit NDFB (S) in a press statement had claimed that Rishima Narzary who was recently apprehended in village Samudisha no 3 after a joint operation was launched by the Army is not a trained NDFB (S) cadre.

NDFB (S) , President, B.Saoraigwra stated in a press statement that, Rishima Narzary, a resident of village Samudisha No 3, under the Ranikhata Police Station is a poor woman under the poverty line and after the loss of her husband she has been working as a labor in the other houses and field for their survival. 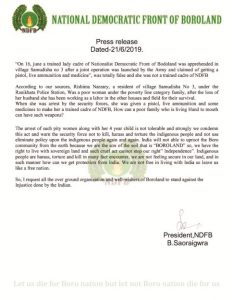 NDFB (S) further stated in their press statement that the news of joint operation launched by the Army and recovery of getting a pistol, live ammunition and medicine from Rishima Narzary’s possession is false.

“When she was arrested by the security forces, she was given a pistol, live ammunition and some Medicines to make her a trained cadre of NDFB (S), How can a poor family who is living Hand to mouth can have such weapons?” questioned the banned militant outfit in the press statement.

Furthermore, B.Saoraigwra stated that the arrest of such pity women along with her 4-year child is not tolerable. “We strongly condemn this act and warn the security forces not to kill, harass and torture the indigenous people and not use eliminate policy upon the indigenous people again and again. India will not able to uproot the Boro community from the earth because we are the son of the soil that is “BODOLAND” so, we have the right to live with sovereign land and such cruel act cannot stop our right” Independence”.

The National Democratic Front of Boroland (NDFB-S) is an armed separatist outfit which seeks to obtain a sovereign Bodoland for the Boro people. It is designated as a terrorist organisation by the Government of India.

NDFB traces its origin to Bodo Security Force, a militant group formed in 1986. The current name was adopted in 1994, after the group rejected Bodo Accord signed between the Government of India and ABSU-BPAC. The group has carried out several attacks in Assam, targeting non-Bodo civilians as well as the security forces. In particular, it has targeted Santhal, Munda and Oraon adivasis (tribals), whose ancestors had been brought to Assam as tea labourers during British Raj. Its involvement in attacks on Adivasis during Bodo-Adivasi ethnic clash during the 1996 Assam Legislative Assembly elections led to the formation of Adivasi Cobra Force, a rival militant group. After 1996, NDFB was also involved in conflicts with the militant group Bodo Liberation Tigers Force (which surrendered in 2003). Since 2000, NDFB has increasingly targeted Bangladeshi migrants in what it claims to be the Boro territory.