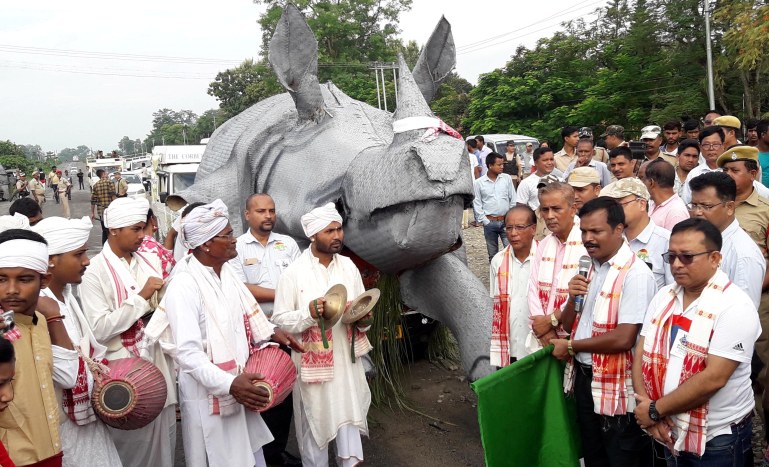 In the programme, two rhino tableaus were flagged off by the director of KNP, P. Shivakumar at Kaliabor Tiniali on Sunday morning in presence of SDO Civil of Kaliabar, Bitupon Neog. One tableau moved towards the Biswanath Division of KNP while the other towards Bokakhat of Eastern Division of KNP. The tableau coming towards Bokakhat was accompanied by a possession of almost 500 people till it reached the Burhapahar area. Local people, eco-development committees and many others welcomed the tableau and honored it with gamusa in the Burhapahar area. When the tableau reached Kuthori, local women groups of the area welcomed it with Assamese traditional naam-kirtan.

By 12 pm, the tableau reached Kohora where the students of Rising Sun English School, Kohora honored the tableau with gamusa. The students of the school also recited poems. A handmade picture board of rhino containing pictures of different moments of rhinos along with a pencil shade painting done by the students were presented to Salim Ahmed, Forest Range officer of Kohora. The local people of Kohora also participated in many programmes like street play and Gayan-Bayan.

Later in the day, the tableau reached Bokakhat where the open session of the programme began. It was inaugurated by State Agriculture Minister Atul Bora. He said that the local people from the nearby areas of KNP had always helped in the conservation of rhinos because of which the rhino population in the park had reached a viable limit in recent years.