Water Logging in Guwahati: Fancy and Uzan Bazaar Under Water after Rise in Water Level

Guwahati: With the advent of monsoon, the heavy rains in the state have swelled up to the mighty Brahmaputra to a point where it has even crossed the danger level. This poses a serious threat to the people of the state already heavily wounded by the crisis of flood in the Guwahati city as well.

The danger level is at 49.68 metre and presently, it has crossed 50 cm above the determined danger level.

Few photographs shared by the netizens on social media shows us the present condition of Guwahati city. As per the latest report, Guwahati is under water after a rampant rise in the water level of River Brahmaputra near Fancy Bazaar area and Uzan Bazaar area. 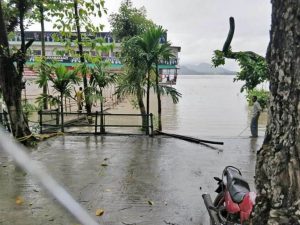 As per Government Report, one person had lost his life due to fooled in the districts Dhemaji in the last 24 hours. So far, a total of Rs 14, 06,711 number of the population have been affected in the recent wave of flood in these 25 districts. 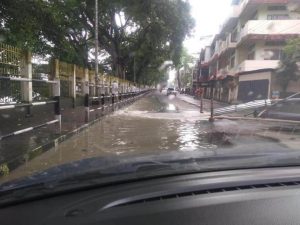 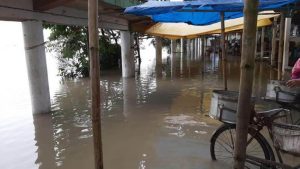 River Brahmaputra in Jorhat, Sonitpur, Kamrup, Goalpara and Dhubri Districts, Burhidehing in Dibrugarh, Subansiri in Lakhimpur, Dhansiri in Golaghat, Jia Bharali in Sonitpur, Kopili in Nagaon, Puthimari in Kamrup, Beki River in Barpeta, Barak in Cachar and Karimganj, Katakhal in Hailakandi and Kushiyara in Karimganj districts are flowing above the danger level.

The three lives were lost due to floods and landslides in the past 24 hours in Golaghat and Dima Hasao districts. So far, over 8.69 lakh people have been affected in the current wave of floods in the State. As many as 1,556 villages in 68 revenue circles in Dhemaji, Lakhimpur, Biswanath, Sonitpur, Darrang, Baksa, Barpeta, Nalbari, Chirang, Bongaigaon, Kokrajhar, Goalpara, Morigaon, Hojai, Nagaon, Golaghat, Majuli, Jorhat, Sivasagar, Dibrugarh and Tinsukia districts by this wave of floods.

A number of rivers have been flowing over danger levels – the Brahmaputra in Jorhat, Sonitpur, Kamrup, Goalpara and Dhubri districts; the Burhidehing in Dibrugarh; the Desang in Sivasagar; the Dhansiri in Golaghat; the Jia Bharali in Sonitpur; the Kopili in Nagaon; Puthimari in Kamrup; Beki in Barpeta; Katakhal in Hailakandi and the Kushiyara in Karimganj districts.