Bottle Rockets vocalist Arghadeep Baruah plays a young research scholar in Bhaskar Hazarika’s second feature film Aamis. With the debutant actor’s film being presented by one of the big names in the industry, this newcomer is flying high with his feet firmly on the ground!

Nature has always fascinated Arghadeep. His work as an editor, cinematographer, and musician has organically led him even closer to it. From editing films about forests to lending his soulful voice to songs about nature, Arghadeep’s latest foray into acting has led him to explore the nature of a different kind - human nature. Aamis, presented by Anurag Kashyap - one of the champions of Independent Cinema in India, is coming to theatres on November 22.

Tell us something about your life so far - where were you born and brought up schools and colleges you attended, and your initial creative pursuits.

My life has been beautiful so far. I am really grateful for getting opportunities that helped me understand the world we live in, as well as the world that lies within us. I was born and brought up in Gauripur, Dhubri where I did my initial schooling. After moving to Guwahati, I tried studying commerce, only to realize it wasn’t really my cup of tea. A crash course in photography and videography, followed by a master's in mass communication and journalism from Assam University, Silchar set me on the correct path. Soon, I got a fellowship at The Green Hub, Tezpur on wildlife and community-based film making. As part of the fellowship, I worked with Aparna Sanyal ma’am on her film One Mustard Seed as a cinematographer and assisted my mentor Nitin Das Sir on his film India’s Healing Forest.

How did the lead role of Aamis happen to you?

I was in Gurgaon doing the daily edit for India’s Healing Forest. After the first shift, I went to my room and saw 19 missed calls! That's how I got to know I'm being considered for Bhaskar Da's new film. And the rest is Aamis..

How was the experience of shooting the film?

Aamis was a great learning experience for me - not just as a film enthusiast but also as a human being. At the 10-day workshop we had with Seema Biswas and Daulat Vaid, I ended up confronting some emotions I wasn’t aware of earlier. I also got exposed to the idea of ‘raasa’, and I learned to look at a film from the perspective of an actor. I owe a lot to the Aamis family! 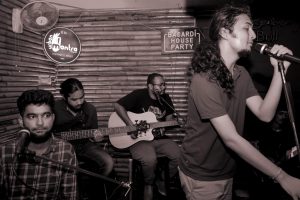 Our band is called Bottle Rockets. We’re a six-piece, multilingual band, and our songs are inspired by nature, forests, and the way we, as humans, live. We have deliberately not restricted ourselves to any genre, which makes our songs very fluid and open to interpretations. Currently my brother Chinmoy Baruah manages the band and in fact, he was the first person to whom I showed the script of Aamis before saying yes.

Actually, now that I think about it, our band is also very strongly connected to the Aamis family. One of our songs ‘Bukute’, which we are planning to release very soon, has been penned by Sagar Saurabh da, who has played the role of Elias da in Aamis. Another Nepali song of ours called ‘Pratibimb’ has been written by Sweta Rai Chamling, the editor for Aamis.

Are you receiving a lot of acting offers after Aamis?

I am still trying to understand the craft better. But yes if I get a script where I get to explore the craft, I would love to do it. Currently, I am doing a film with Prasanta Saikia Da called Guwahati Diaries. And I recently did a short film with Himajyoti Talukdar Da of Calendar fame. 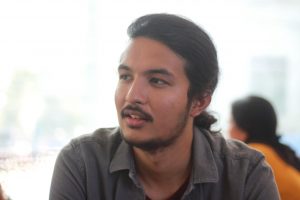 How does it feel to know your debut film is being presented by Anurag Kashyap?

First of all, being a film enthusiast and someone who wants to be a storyteller someday, I feel humbled and honoured to be in a film crafted by Bhaskar da, an amazing storyteller.

When it comes to Anurag Kashyap presenting our film, I feel grateful and motivated to know that our film is being appreciated and cheered on by Anurag Kashyap! He is undoubtedly one of the few Directors from India for whom I have great regard and respect.

I still remember getting exposed to Black Friday by listening to its songs because the Indian Ocean was behind it! And since then he has been constantly inspiring me with his films and stories. My warm regards and thanks to him.

Are you nervous about audience reactions to your debut role in films?

I am optimistic. Not really nervous, just a little shy!