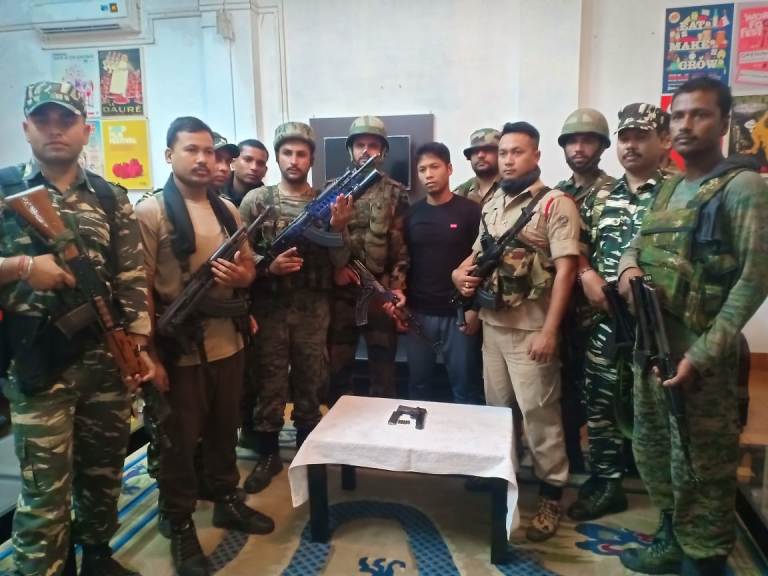 Tinsukia: Under sustained pressure from police and security forces, at around 9.58 pm on 18 July 2019, one ULFA (I) cadre laid down arms and surrendered before the joint team in Tinsukia.

As per police sources, Inderjeet was the cadre of ULFA(I) Trg Batch-2013.

Furthermore, the Security forces also seized a 9 mm Pistol (Factory made) along with one magazine and 5 live round of 9mm bullets from his possession.

Earlier, three ULFA (I) cadres had surrendered in front of Security Forces (Tinsukia Police & Army) on the same day at Talpathar under the Bordumsa Police Station in Tinsukia District of Assam.

It may also be mentioned that following the onslaught against the militants of Northeast, the ULFA (I) rebels were reported to be in disarray and disillusioned. Earlier, Monikanta Sonowal (21) alias Adarsha Asom of Bormaithong in Tinsukia district and many more hardcore cadres managed to escape from the ULFA (I) Myanmar camp and accordingly surrendered before the security forces.

Assam Police also mentioned during a press conference that due to the intensified operation by the Myanmar Army, the rebels have been changing their camps often and whoever is getting an opportunity, is trying to flee Myanmar and surrender.

Also Read: Two Arrested for extorting money in the name of ULFA(I) in Tinsukia