Guwahati: The Mizo National Front (MNF), after winning in the Mizoram Assembly Elections with the majority of seats being captured, takes their oath under the leadership of their chief Zoramthanga at the Raj Bhavan in Aizawl on Saturday. Zoramthanga takes oath as the new chief minister of the state, a position which was being held by him twice in the past.

Zoramthanga and his team sworn-in as the new government of Mizoram under the administration of Governor K Rajasekharan. Before this, on Wednesday, Governor Rajasekharan gave the formal invitation to Zoramthanga for forming the next government in the state.

Notably, MNF is the single largest party in the state that has won 26 seats in the recently-concluded Mizoram Assembly Elections. Another strong party in Mizoram, Congress which was in power since 2008, could secure only 5 assembly seats.

The list of the new cabinet ministers is as follows: 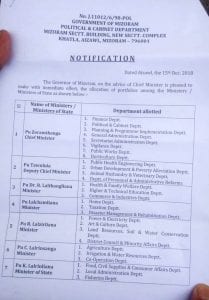 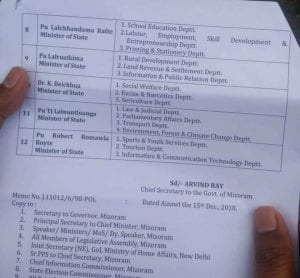 1. C.M Pu Zoram Thanga, who has held the position for the 3rd time as CM.

Other ministers in his cabinet are:

The Ministers of State (MOS) are:

The newly-appointed speakers of the new Mizoram government:

Also read: MNF President Zoramthanga to be sworn in as next Chief Minister of Mizoram